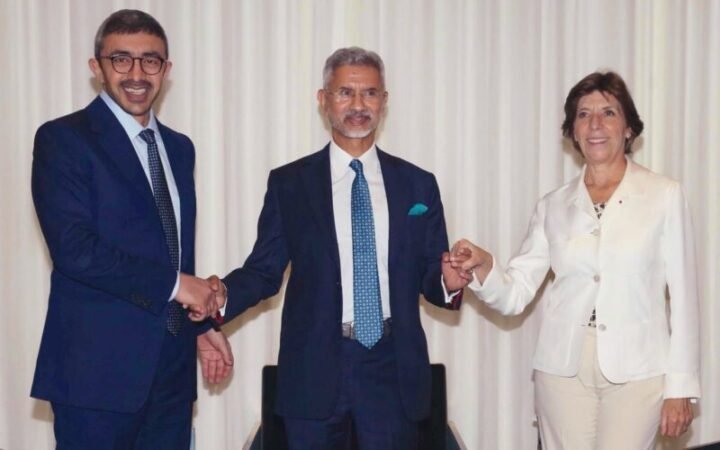 Against the backdrop of the 77th session of the United Nations General Assembly (UNGA), the Indian diplomatic community was abuzz with the rounds of Bilateral and multilateral meetings with various heads of the states. Before the start of the session, the foreign ministers of the three nations, India-UAE-France, met and discussed issues of mutual interest with a focus on the “active exchange” of ideas. The inaugural trilateral meeting was hosted by the Foreign Minister of the United Arab Emirates, Abdullah bin Zayed Al Nahyan. Along with the host, the troika was attended by the External Affairs Minister of India, Dr S Jaishankar, and his French counterpart Catherine Colonna.

Traditionally alliances, coalitions, and groupings are dictated by the externalities of Geography, politics, and the common threat. The Concert of Europe was a coalition of European nation-states established in 1815 after the Napoleonic war to maintain the status quo and territorial integrity of the European continental powers. Similarly, after the 9/11 terrorist attacks, the United States of America formed a loose alliance of like-minded nations to wage war against terrorism.

The Current trifecta of India-UAE-France defies the above factors while forming the grouping. As in earlier clusters or alliances like the NATO or Warsaw Pacts, all three countries don’t share the same geographical setup. Geographically India sits in the crowded neighbourhood of Asia, surrounded by three oceans at its southern ends. Additionally, France is a European power with vast overseas territories in the Pacific Region. At the same time, the UAE is a part of volatile West Asia or the Middle East typified by a conservative nationalism alongside rising power rivalry in the region between the traditional power of Saudi Arabia and Iran.

Politically all three have different governmental setups, with India and France being part of the liberal democratic tradition while the United Arab Emirates is a monarchy authoritarian in nature.

In the present decade, the world is transforming due to the change in the Global Balance of power from the west to the East. The uncertainty is accentuated by the rising instance of ethnic nationalism, climate change, and Disruptive technologies, to name a few. It requires the country to move from traditional statecraft to a more provocative one depending on the changing circumstances. As the Global space becomes more constrained due to the rise of new centres of power like China, India, Turkey, and South Korea, along with those of the USA and Russia, the leaders of the respective countries need more space for manoeuvring to refrain from antagonizing the established power.

Assessing the various sets of Permutations and combinations, India has embarked on a partnership based on the convergence of Issues. The Indian foreign policy lexicon is “Issue-based coalitions of the willing.” It ensures that India remains aloof from its long stand of not being a part of any alliance or coalition as part of the ‘non-Alignment’ policy.

In recent times, India has been part of numerous such groupings like the QUAD (India-United States-Japan-Australia), I2U2 (India-Israel-UAE-US), and JAI (Japan-America-India). Through this, India has been able to deepen its partnership with a combination of countries on the issues affecting humanity, like Climate change. It also ensures that India would not be viewed as choosing sides among the nations while engaging in a broader platform.

The aftermath of the Abraham Accords

The trilateral format of the India-UAE-France gained traction after the signing of the historic Abraham Accords between the United States of America and its Middle East partners, Israel, UAE, and Bahrain. The Agreement sought to establish a new normal in the Middle East by normalizing relations between Israel and Arab nations. The signing of the framework agreement demonstrated the inherent limitations in pursuing hard-core realist policies. The United States has realized that the road to peace and stability in the volatile and crisis-laden Middle East is for broader engagement among the countries.

India, too, is facing many crises in its geographical neighbourhood. The Galwan valley crisis has shown the danger of belligerent China in its periphery to the Northern and Eastern borders. Then to the west is China’s all-weather ally Pakistan which has a traditionally antagonistic relationship with India. This so-called ‘Two front ‘ challenge is further exacerbated by the domestic factors germinating in the country.

To tide over such a crisis, India has to pursue Internal and External balancing on many fronts. While Internal balancing through the modernization of armed forces and other Institutions could be a way forward, New Delhi has limitations in its force augmentation capacities due to various factors like resource scarcity, lack of political will, etc. Thus, India has a favourable option for External balancing by partnering with like-minded countries on varied issues concerning its core national interests. India has strengthened its relationship with the QUAD security grouping through military exercises like ‘THE MALABAR‘ to check the rise of China in the Indo-Pacific Region.

Similarly, the UAE and France’s presence in the India, France, and the United Arab Emirates grouping has ensured that new Delhi’s interests are protected in the respective regions. During the COVID-19-related supply chain disruption and aftermath of Russia’s war on Ukraine, UAE is critical for India for its energy security by supplying uninterrupted crude oil. UAE is the only Arab country in the region after Saudi Arabia, which has been reluctant to indulge in India’s internal affairs. Instead, it has acted against the narrative employed by Pakistan in the Organization of Islamic Countries (OIC) after the scrapping of Article 370 in Kashmir. UAE is the only nation in the gulf being visited by Indian Prime Minister Narendra Modi a record number of times.

France is India’s reliable and historically time-tested partner in the European continent. After Brexit, France is considered the gateway to the European Union for Indian goods and services. New Delhi and Paris have collaborated on issues like terrorism, extremism, and climate change at the highest global platform like the United Nations. After the United States, France is the only western nation supporting India on terrorism-related aspects by sponsoring sanction regimes against Pakistan-based terrorist organizations and their leaders. India and France are jointly collaborating on the idea of a free and open Indo-Pacific (FOIP) and freedom of navigation on critical waterways.

Before the Ministerial level meeting of the three nations, a focal point meeting of senior officials was held in July 2022 to undertake joint study and collaboration on issues like Blue Economy, Artificial Intelligence, Climate Change and resilience, Food Security, and Supply chain resilience system.

France has also proposed setting up a ‘Rafale Forum’ in collaboration with India and the UAE. Both nations are active partners in Using Rafale fighter jets for airspace security.

The India, France, and the United Arab Emirates trilateral forum is an amalgamation of India’s strategic partners with a standard set of Interests. The blocs coming based on ‘issues’ rather than narrow interest of geography and enemy will provide greater flexibility to swing nations like India to achieve their national interests. India has done a tremendous job adjusting its foreign policy goals and instruments according to the changing times. The most prominent example is the advent of NAM after the Independence to its new form of ‘Issue-based partnership’ in the present circumstances. The foreign policy pundits in the south block should be commended for their far-sightedness.

Siddharta Das is an Intern at The Kootneeti