Bolsonaro as Chief Guest to Republic Day Parade: What does it mean to India-Brazil Relations 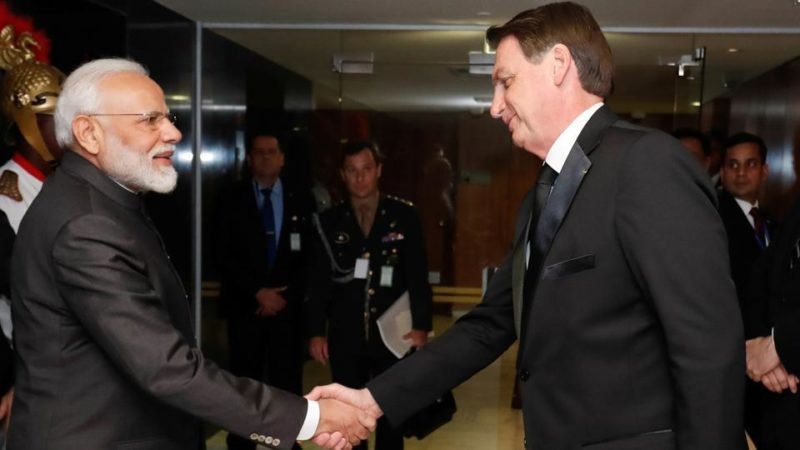 India and Brazil share participation at some of the major forums such as BRICS, G-20, G-4 and IBSA. Both nations have tried to keep themselves away from the major blocks of the world and have been independent in their approach. These both are also campaigning for a permanent seat in UN Security Council (UNSC). But even after signing of the Brazil-India strategic partnership in 2006, the geographical distance and scarcity of social interactions somehow have been major constraints that are hampering the bilateral relations.

These two nations have the largest democratic setup in the world having the same issues as environmental protection and economic slowdown. High population growth is also a reason for thought. Meeting of the two heads in New Delhi is not only going to take out the potential for cooperation in areas that the two countries have traditionally exerted influence and leadership. It will also evolve India-Brazil relations from economic partnership to a broad-based dialogue and develop clear strategies towards each other.

Brazil is very much focused on its approach to reorienting its foreign policies towards Asia and India is also in a move to improve relations with Latin America and the Caribbean (LAC). There is also a shift in the trade policy of both nations as they are also known for high import tariffs.

Mercosur, which is a sub-regional political and economic bloc of South American countries including Brazil as one of its members. Mercosur is also called as the common market of South America. This has Free Trade Agreements (FTA) with many Asian nations including South Korea and Singapore, while for India the things have been in much pressure after India kept itself away from Regional Comprehensive Economic Partnership (RCEP) despite reaching to the final round of talks. So here the onus will be on Brazil that how it moves on and make this accumulation happen.

The defence sector for Brazil and India have a lot of aspirations that are standing on the gateway. The fact is that both have to use this opportunity in a given set of time. Brazil is expected to increase its international portfolio of sales and investments in India through the ‘Make in India’ platform. India and Brazil will also upgrade their strategic partnerships with an action plan and will also sign a Bilateral Investment Treaty (BIT). The BIT will be one of the first treaties that India will ink since 2015 when it was decided to scrap all existing treaties with 83 countries and brought up a new model. Social Security Agreement (SSA) will also be exchanged to allow investments in each other pension funds. This agreement is expected to benefit India far more than Brazil as India currently has 4,700 workers in Brazil while Brazil has only 1,000 workers residing in India.

This is the time when the world is witnessing the rise of China as a global economic power, it’s influence has been growing rapidly across Latin America and the Caribbean. It should also be a driving force for India to not let this opportunity vanish away. And for Brazil also, Asia can provide it with a new alternative of the west.

Sometimes it has been argued that Brazil has not a clear strategy towards India. Nor India has a strategy towards Brazil. And whatever has been happening is just for the sake of any compulsion. But now there has a shift in this mindset. Prime Minister Narendra Modi and President Bolsonaro are known to adopt a tough stand on a range of issues, and their past and this present will definitely be going to brought out cooperation in field of diverse areas including defence and agriculture to some similarly looking challenges like establishing sustainable development for big population, alleviating poverty, filling the gap of income inequalities, tackling corruption, and inefficiency in the governance.