Why does President Trump want to postpone the elections? 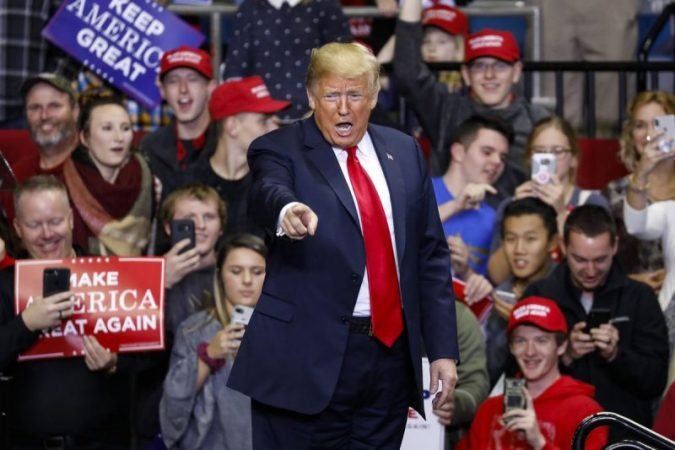 In a world plagued by the pandemic, where uncertainty looms large, the President of the United States rather than stepping up to his responsibility to lead the country following the COVID-19 outbreak is coming up with ideas as postponing the US presidential election scheduled for 3rd November 2020.

What did POTUS say?

U.S. President Donald Trump asked via Twitter if he can postpone the US presidential elections scheduled for November 3, 2020, citing concerns over the possible use of Mail-in voting system. This system of voting is expected to be used on a large scale following the necessity to maintain social distancing and other measures following the COVID-19 outbreak.

Top Republicans rejected Mr Trump’s suggestion that the November 3rd presidential elections can be delayed. Among them were Senate Majority Leader Mitch McConnell and House Minority Leader Kevin McCarthy. Mr President would have to take a legal path if he wants to delay the election date which is set by federal law. Any such move will have to be approved by Congress – the House of Representatives and the Senate. Mr McConnell told that never in the 200-year-old American history had the election been postponed. He further added that we always had elections in time whether it was the during the outbreak of Spanish Flu, American Civil War or anything else. Senator Lindsey Graham said that dealing the election wasn’t a good idea.

Why does President Trump want to postpone the elections?

The U.S. President probably was not aware of the fact that he cannot delay the election without the approval of the Congress which is controlled by Democrats partially and the Democrats will not allow him to do that especially when Mr Joe Biden, the Democratic presidential candidate is leading President Trump and has a possibility to win the presidential elections. He must be aware that tweeting about an election delay framed in a manner of inquiry would invite criticism and bring him under the radar after he himself said that he might not accept the poll results. The incumbent is trying what is within his reach to postpone the elections. A majority of the Americans are expected to vote through Mail to keep the risk of COVID- 19 at bay, the contagion that has claimed more than one lakh lives in the United States.

In a White House conference, Mr President denied claims that he wanted to delay the elections. All he said was that the mass postal voting would leave the results in doubt. He even tweeted that with the Mail-in voting, 2020 will be the most inaccurate and fraudulent elections in American history. He was simply arguing to delay the elections until the people can properly and safely vote.

COVID- 19 outbreak has done serious damage to Mr Tump’s approval ratings. His ratings have plummeted majorly due to his unresponsiveness following the outbreak of the coronavirus. The US economy is facing the worst recession since the Great Depression, the society is in a grip of civil unrest since the death of George Floyd, a black American, in police custody. All this do not sound good to U.S. President’s ears and that is why probably he’s trying his best to postpone the elections hoping that in the meanwhile some good news be it related to COVID- 19 vaccine or economy showing signs of recovery that can strengthen his position vis a vis Joe Biden.

According to Washington Post, US Postal service workers say backlogs may delay the delivery of ballots in time for US presidential elections. 6 states namely California, Utah, Hawaii, Colorado, Oregon, Washington were planning to hold all Mail ballot elections in November. Mail-in voting is expected to occur on a large scale amid concerns following COVID- 19  outbreak.

Although there is a negligible possibility that the US presidential election scheduled for 3rd November can be postponed, the bigger question is the damage that has been done to the American democracy by President Trump himself. Firstly he is only the third to be impeached on accounts of abuse of power, including a threat to national security by involving a foreign government to meddle in elections; a claim that he has repeatedly denied. Now it is time for the voters to ask themselves whether their obligation lies for a president who has repeatedly overlooked the rule of law, who has utter disregard for the lives of Americans by failing to step up to his role following COVID-19 outbreak, the one who despite knowing about the fate of Blacks in America speaks the language of the whites; a behaviour that is degrading for a president of a country that is divided on every issue.