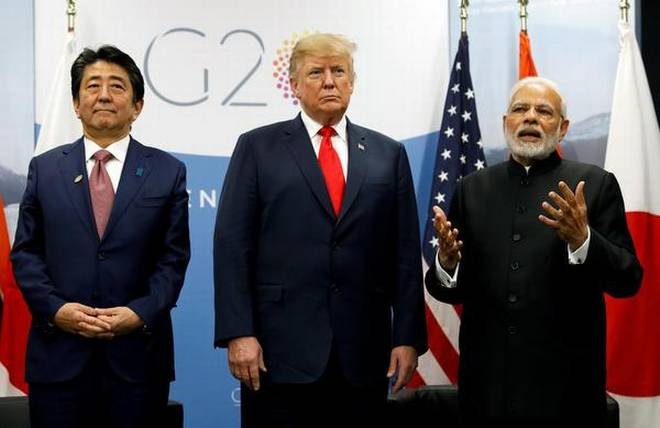 PM Modi ever since his inception in 2014 has laid a strong emphasis on his foreign policy, from “Neighborhood First” to “Act East” to enhancing engagement with the US, Russia, China, the European Union (EU), France, ASEAN & middle eastern powers (Israel, Saudi Arabia, UAE). India today, along with various bilateral trade partnerships, has military logistics agreements with the US, Russia, France, Singapore & Indonesia and is likely to sign more such in the near future with South Korea, Japan & Australia. India’s foreign policy prioritizes economic growth, defence procurements, energy security, counter-terrorism, technology partnerships, peace & stability in South Asia, freedom of navigation in the Indo-Pacific & balancing China’s increasing influence in its greater neighbourhood. India’s foreign policy hence has to be steered carefully in the framework of its bilateral arrangements with various powers, balancing on some & counterbalancing on other significant issues. Therefore, India’s partnerships especially with conditional allies the US, Russia & France as well as rivalling China, remain crucial. India’s ties with Saudi Arabia & UAE are intricately linked to its energy security making them robust just like the defence & technology partnership with Israel. Relations with the ASEAN (esp. Vietnam, Indonesia & Singapore) Australia & New Zealand as a part of the Regional Comprehensive Economic Partnership (RCEP) have also witnessed a noticeable boost. India’s international involvement under PM Modi has gone beyond its sphere of influence & a traditional select few, ushering in a doctrinal shift being termed by spectators as “Multi-Alignment” and in the words of External Affairs Minister Dr S. Jaishankar

“The days of non-alignment are over and today we live in an era of stronger multi-polarity and weaker multilateralism. We are moving significantly from a world of alliances to a world of convergent interests.”

Foreign policy & strategic affairs observers, however, predict India’s eventual shift away from multi-alignment either deliberately or through coercion or circumstantial necessity. The paradoxical situation that India is in today has its own merits & demerits assuring opportunities for all for cooperation yet at the same time remaining apprehensive of increased commitments. India’s bilateral issues with Pakistan too cast a shadow on its international engagement & solving this lingering problem plays a key role in New Delhi forging meaningful alliances. The focus of this article is to examine India’s most crucial engagements with the US, Russia & China in the recent past & New Delhi’s conscious balancing act in furthering its interests.

President Trump’s foreign policy is perceived as “transactional” with electoral implications in 2020. India’s status as a Generalized System of Preferences (GSP) member was terminated in addition to increased tariffs on Indian exports to the US & New New Delhi responded similarly by imposing tariffs on select American imports. President Trump imposed sanctions on both Iran & Venezuela, thus affecting India’s energy security & forcing oil purchases from the US. On the defence front, New Delhi was concerned with Countering American Adversaries through Sanctions Act (CAATSA) imposition due to the procurement of S-400 missile defence systems from Russia. India avoided this by procuring fighter jets, utility planes and other defence purchases from the US. Geopolitics plays a key role in the Indo-US relations with each perceiving the other as a partner in maintaining security in the Indo-Pacific region against the backdrop of China’s expansionism. The relationship, therefore, is based primarily on convergent interests in the region which is reflected in President Trump’s support for India in crucial issues like the bilateral resolution of the Kashmir situation by India & Pakistan; despite controversial statements on being a mediator earlier. Washington’s pressure on India is also felt in the case of banning 5G technology testing from Chinese Huawei’s citing security worries. This conflicting posturing most likely indicates covert coercion being employed by the US on India to join the Western coalition as an ally to balance China. India can also find an opportunity to negotiate in restoring the GSP as its economic growth has slumped. At a time when the Chinese economy under the trade war with the US sees a loss in Foreign Direct Investment (FDI), India should capitalize on the situation and portray itself as the ideal destination for American investment, with cheap labour costs, skilled workforce as advantages, thereby gaining access to global value chains. In the case of the situation in Afghanistan, with the disruption in the peace talks with the Taliban & President Trump’s reversal of his decision to keep troops longer is a positive for India as Pakistan remains under the American watch & regional stability prevails at least in the short run.

India’s interests in both the Indo-Pacific & the Arctic, as well as energy security, will define the future of Ruso-Indo relations. President Putin’s invitation to PM Modi to the Eastern Economic Forum (EEF) in Russian Far East (RFE) indicates the evolving nature of the relationship which was previously confined to space, defence & civil nuclear cooperation. The trip culminated with PM Modi pledging a $1 billion line of credit to Moscow to jointly develop RFE. Russia’s increased reliance & strategic partnership with China & engaging with India simultaneously indicates Moscow’s fine balancing act. Russia under Western sanctions sees an opportunity in the form of India & President Putin seeks to challenge the dollar hegemony by pursuing bilateral trade in domestic currencies. In light of increasing Chinese presence, Moscow seeks to diversify foreign players in the RFE, a sparsely populated region covering 6 million square kilometres rich in natural resources. The bilateral joint statement discussed cooperation in hydrocarbon extraction & exploring sea routes in the Arctic as well as from Vladivostok to Chennai, without any explicit mention of its passage through the South China Sea (SCS). This comes at a time even as Beijing pledged investments in Iran, worth $400 billion in energy production & infrastructure development including the Chabahar port, casting shadows over the fate of the International North-South Transport Corridor for which this Iranian port was envisioned as India’s gateway to Russia via Central Asia connecting Mumbai & Moscow. In the case of abrogating Article 370 in Kashmir, President Putin backed India and asked for a bilateral settlement of the dispute, nevertheless, the Russian representative to the United Nations (UN) spoke on resolving the issue both bilaterally & based on the existing UN resolutions during the United Nations Security Council (UNSC) closed-door meeting. This perhaps is a move to keep Beijing in the good books and the upcoming General Assembly (UNGA) sessions are likely to throw light on Russia’s stance as India hopes for their support.

The Sino-Indo relations are yet again on a downward spiral post the abrogation of Article 370 with China condemning India’s unilateral decision claiming Ladakh as a disputed territory which includes the Aksai Chin region under Chinese control. China backing Pakistan at the UNSC closed-door meeting was on expected lines & has a major bearing on New Delhi’s bilateral relations with Beijing. In the midst of trade war with the US & pro-democracy protests in Hong Kong, Beijing is taking calculated steps in condemning India on its actions. Despite the promises of upholding the “Wuhan Spirit” last year, the lack of trust is evident and is compounded by recent reports of Chinese road construction activity in India’s Arunachal Pradesh in the Chagalgham sector. The China Pakistan Economic Corridor (CPEC) which is passing through the Gilgit Baltistan region in POK has been a contentious issue for India for a while now. 50% of India’s trade passes through SCS & India’s engagement with countries in the greater Indo-Pacific is expanding & the presence of People’s Liberation Army Navy (PLAN’s) spy ships & submarines patrolling the region is being perceived as a security threat. New Delhi’s countermeasures in dealing with Beijing in the region include the Quad, an alliance of democracies including US, Japan & Australia; however, the Quad’s effectiveness so far remains questionable. Meanwhile, China has promised the construction of a submarine base in Bangladesh’s Cox’s Bazar & also about to set up a bilateral consultation mechanism on dispute resolution with Malaysia in addition to coercing President Duterte of the Philippines into ignoring the tribunal’s rulings on territorial issues by promising joint oil exploration in the SCS. It is in this background that the informal summit between President Xi & PM Modi is scheduled later this year.

In conclusion, while India’s policy of multi-alignment with important powers has brought in several benefits, New Delhi, nonetheless, is caught in a conundrum. Engagement with Russia is crucial for India’s stakes in the Arctic as well as for energy security & defence cooperation. At the same time, Moscow’s increasing reliance on Beijing with the prospect of sidelining New Delhi on matters of international importance remains India’s insecurity. President Putin’s invitation to the EEF in Vladivostok in RFE assuages some of India’s concerns with Moscow including addressing the perception in New Delhi on the extent of the exclusive nature of Russia’s India policy, remaining strictly independent of third party interference. However, at the same time US’s covert coercive tactics in matters such as the purchase of Russian S-400 missile systems, Huawei’s 5G testing, removal from the GSP list etc. indicate Washington’s increased expectations from New Delhi to be a partner & play a key role in the Indo-Pacific. It would be interesting to see how this plays out in India’s future foreign policy decision making, at the same time one can foresee a gradual shift of New Delhi towards Washington with the immediate threat of Beijing’s might being displayed in the immediate neighbourhood.