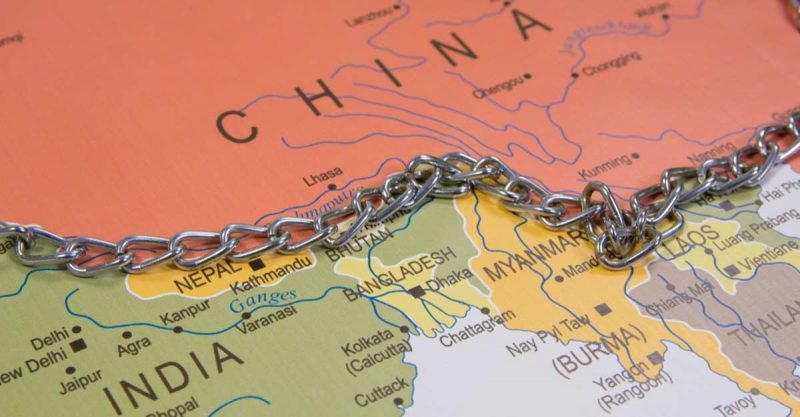 India and China have been involved in a stand-off since two months at the Line of Actual Control (LAC) in Ladakh. During the stand-off, there have been a few clashes between both the forces. On June 6 a high-level meeting was held between military officers from both the sides in which there was an agreement to de-escalate. As a part of de-escalation, China had agreed to remove its newly constructed post at the LAC. But China did not carry out its part of the agreement. When the Indian delegation went to inquire about the same, China attacked the delegation in which the Commanding Officer Colonel Santosh Babu lost his life. Later Indian soldiers of 16 Bihar Regiment attacked the Chinese soldiers which resulted in casualties from both the sides. These attacks took place by way of hand to hand fight, sticks and stones. Agreements of 1996 and 2005 between India and China prevent both the forces from using a gun or any other firearm at India-China border.

Since two months China has been attempting incursions across the LAC at several places such as the Galwan Valley, Hot Springs, Pangong Tso Lake, Depsang and Demchok. On its side of LAC, China has been building posts and bringing in a large number of troops. After the recent incidents at the Galwan Valley India has also increased its strength at the border.

Along with China, Nepal is also involved in a border dispute with India. It would be important to know these disputes individually and collectively with strategic relevance.

The border dispute between India and China

The confrontation happened at a place called Line of Actual Control (LAC). India shares 3,488 km long border with China. India-China border spans across one Union Territory – Ladakh, and four states – Himachal Pradesh, Uttarakhand, Sikkim and Arunachal Pradesh. The LAC is not a well-defined and well-marked border due to the geographical location. This is the reason why Indian and Chinese troops often cross each others’ path while patrolling. Heated arguments and clashes between Indian and Chinese troops are common along the LAC. Most of the times, these situations are resolved by discussions between senior military officials from both sides.

In 1962, China invaded India and occupied 38,000 sq km of the territory of Ladakh. The origin of border dispute is the McMahon Line of 1914 that defines the border between the two countries. China had challenged this demarcation. The efforts between India and China to resolve the dispute did not succeed. As a result, there was a war in 1962. There have been a number of dialogues between both the countries but the border dispute remains unresolved.

Where does Nepal come into the picture?

While India has been engaged in a stand-off with China for two months now, Nepal has brought up a border dispute with India. India-Nepal shares 1800 km long border. In May, Nepal released a map in which three places – Kalapani, Lipulekh and Limpiyadhura – which are part of India, were shown as the part of Nepal. These places are located in the Indian state of Uttarakhand. Later in June Nepal’s parliament passed the bill approving the new maps and Nepal’s President Bidhya Devi Bhandari ratified this bill.

In the present circumstances, Nepal’s border dispute with India cannot be viewed in isolation from China. Nepal’s status is that of a buffer state – a small country situated between two big countries. For Nepal, a major challenge for its foreign policy has been balancing its relations between India and China. From India’s and China’s point of view also Nepal is strategically important for both.

In the past few years, Nepal’s proximity to China has been increasing. This is evident especially since the Communist Party has come to power in Nepal in 2018. Even before that China had been developing strong relations with Nepal by making investments there. Nepal became a part of China’s Belt and Road Initiative in 2017. India views Nepal’s actions with regard to India’s territory being done at China’s behest. Also, Nepal being a landlocked country, depended a great deal on India for access to the seaport. All of Nepal’s trade was conducted through Kolkata port until 2018. But with the Transit and Transportation Agreement of 2018, China has allowed Nepal access to Chinese ports. China is also constructing railway line to Nepal through Tibet.

So China’s role in the India-Nepal dispute cannot be denied in totality. Recently, India has built a Link Road that connects Lipulekh Pass to Kailash Mansarovar (at present under China’s occupation and located in Tibet Autonomous Region), a pilgrimage place for the Hindus. This Link Road is expected to reduce travelling time to Kailash Mansarovar by around 80%. Earlier Indian pilgrims had to travel either through the northeastern state of Sikkim or through Nepal.

China has been increasing its presence among India’s neighbours as an attempt to encircle India through its Belt and Road Initiative. This has been observed with respect to Pakistan, Sri Lanka, Bangladesh, Myanmar and now Nepal. China’s actions either directly or through Nepal are a part of its assertive policies followed in South Asia, Southeast Asia and across the Indo-Pacific Region. India and its neighbourhood has been a subset of China’s larger designs. Because India is one of the countries that China sees as a challenge to its Belt and Road Initiative project. Parallel to dispute with India, China is currently involved in disputes with Taiwan, Hong Kong, Vietnam, Malaysia, Indonesia, the Philippines, the US and Australia.

Another reason for China’s current dispute with India is the 255 km Darbuk-Shyok-Daulat Beg Oldie (DSDBO) Road built by India near the LAC. This road connects Leh (capital of Ladakh) to Karakoram Pass. Not only does this road give India better and faster access to the LAC it is also situated in close proximity to the proposed China-Pakistan-Economic-Corridor which connects China’s Xinjiang Province to Pakistan’s Balochistan Province. India has objected to this corridor for violating India’s sovereignty since it passes through the area of Ladakh that is under China’s occupation. Construction of the DSDBO Road gives India a strategic advantage over both China and Pakistan since India can monitor the movements of both in a better manner.

The origin of India’s border disputes with Nepal and China was bilateral in nature. But in the current circumstances, these disputes have assumed a much complex nature owing to the expansive ambitions of China and an attempt to gain an advantage over India. India on its part needs a combination of strategic, economic and diplomatic means to resolve these issues. Also, India needs to plan in the long term to reset the situation in its favour.