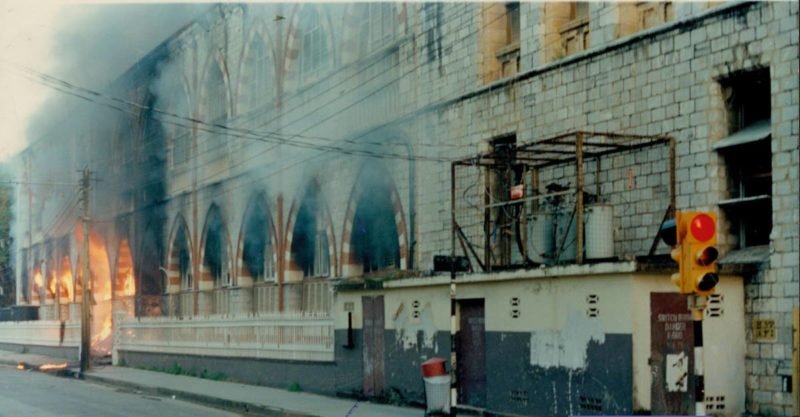 On Friday, July 27, 1990, Trinidad experienced its own day of infamy when a radical Afro-Trinidadian Islamist group, the Jamaat-al-Muslimeen, led by Imam Yasin Abu Bakr, an Afro-Trinidadian convert to Islam previously known as Lennox Philip and a former policeman, staged an armed insurrection with 113 of his followers, and held hostage for six days the then Prime Minister, Arthur N.R. Robinson, most of his cabinet and several opposition Members of Parliament, plus the staff of the Government-owned television and radio networks.

The Parliament building and the television and radio studios occupied by the armed insurgents were severely damaged during the standoff that ensued. The Trinidad and Tobago Police Service collapsed within the first hour of the insurrection after its headquarters was destroyed by a car bomb. The capital city, Port of Spain, was abandoned, and the military took hours to assemble a viable fighting force. To this day, it has remained, fortunately, the single biggest violent incident in the history of Trinidad and Tobago.

In 1990,  the country was in the throes of a deep recession with the economy contracting at an alarming rate. Public servants experienced reductions in salaries and the government of Prime Minister Robinson, which had suffered an acrimonious split in 1988, was fast losing both support and credibility. Robinson’s own arrogance and his increasing alienation of the Indo-Trinidadian population contributed to an atmosphere of political and economic unease, bordering at times on despair. Into this inherently volatile situation, the Jamaat-al-Muslimeen entered the fray.

Formed in the mid-1980s, the Jamaat-al-Muslimeen began as a quasi-criminal outfit, initially portraying itself as a vigilante group behind a mask of indignation over the growing narcotics trade that was becoming rampant in the country. The Jamaat-al-Muslimeen grew rapidly in influence and emerged as a challenge to the State in the depressed areas of Port-of-Spain and its environs, obtaining funding and training from, and in, Libya and civilian pattern weapons from the United States through an elaborate smuggling network. In addition, it began forging alliances with and seeking recruits from other radical elements in various mosques. Libyan funding was routed through Muammar al-Qaddafi’s World Islamic Call Society (WICS).

The Jamaat-al-Muslimeen was involved in a major property dispute with the Government over lands that it had occupied. Tensions came to a head when the Government ordered the police and military to occupy a portion of the disputed property.

In spite of the Jamaat-al-Muslimeen asserting that the insurrection was spontaneous, it has been revealed that discussions about assassinating Prime Minister Robinson were held in 1989 and, by October of that year, the physical infrastructure needed for the insurrection was in place. In an example of catastrophic intelligence failure, the Jamaat-al-Muslimeen was under surveillance by the police, including the elite Special Branch, and the military. It was, however, able to plan, gather arms and ammunition, assemble and coordinate the insurrection without interference from any of these agencies.

The Insurrection and its cost

The Trinidad and Tobago Defence Force (TTDF), facing its first major challenge, was hard-pressed to move its two understrength battalions into position with any degree of rapidity. The TTDF, acting as a professional force, sought all members of Cabinet at liberty and ensured that civilian government continued.

Despite the TTDF taking hours to deploy into Port of Spain, and despite the fact that its main bases were not far away, they benefited from the somewhat amateurish execution of the insurrection as Bakr and his followers allowed themselves to be besieged in three locations – Parliament as well as the radio and TV stations. Without a means of escape and lacking food, they were forced to surrender in exchange for an amnesty.

While the insurrection ended with the surrender of Bakr and his followers, they were acquitted of charges brought against them in the Trinidadian courts, which upheld the amnesty granted to secure the lives of the hostages, despite the State making the argument that the amnesty was granted under duress. This has emboldened the Jamaat-al-Muslimeen, and Bakr and his adherents have continued to occupy an important position of influence and prominence in the local Islamic community and the local criminal community.

Paying the Price to this Date

Despite an expensive and controversial commission of enquiry being held, the complete failure to detect preparations for the insurrection remains baffling. However, Bakr did have extensive contacts in the military and police, which may have been a factor.

Furthermore, the Jamaat-al-Muslimeen managed to infiltrate Trinidad’s Customs and Excise Service and thus bring in quantities of arms and ammunition, showing the susceptibility of agencies to relatively easy subversion. The outfit also allegedly sought to forge links with political parties, links that seemed to become evident in the years after the insurrection, with politicians clamouring for support from them as early as the 1991 Parliamentary elections, and which said links continue to come to the fore on occasion when elections are near. This has led to the Jamaat-al-Muslimeen being much sought after as electoral “muscle” by politicians of all hues. Bakr has described himself as a “kingmaker” in Trinidad’s political scene, but his influence and value have seemingly waned over the last decade.

To this day, Bakr and members of the Jamaat-al-Muslimeen are frequently charged with crimes ranging from extortion to murder, but a dysfunctional criminal justice system has ensured that Bakr has never been convicted and his henchmen rarely face sanctions for their actions. Despite weapons being seized from their compound in 2005, the ten Jamaat-al Muslimeen detained for questioning were released without charge. This has given the Jamaat-al-Muslimeen much confidence and credibility among the denizens of the Trinidadian underworld.

Moreover, their seeming impunity has led to a sense of disenchantment with the security establishment and the criminal justice system and, as such, actionable human intelligence continues to be problematic. Confidence in the judicial system was further shaken when the Jamaat-al-Muslimeen was able to reacquire two of ten properties seized for auction at a small fraction of the market value. This apparent impunity has led to strong suspicions that the Jamaat-al-Muslimeen has extensive connections within the political establishment across party lines and continues to subvert the security and intelligence agencies. Given the almost endemic corruption within the police service and the political establishment (transcending political parties), it is not implausible that such suspicions have merit.

The 1990 insurrection and its unfolding aftermath illustrates the muddled and, at times, contradictory Trinidadian response to terrorism. From underestimating the threat to botching the response to failing to adequately punish the insurrectionists, the lack of sufficiently severe consequences for their actions has not only emboldened the Jamaat-al-Muslimeen but has also now spawned a series of other similar groups, among them, the Jamaat al Islami al Karibi, the Waajihatul Islaamiyyah (The Islamic Front) and the Jamaat al Murabiteen, each drawing its leadership from former members of the Jamaat-al-Muslimeen.

The power wielded by these groups helps create fertile ground for recruitment into potential jihadist groups. As such, the membership of these groups keeps expanding with recruits falling prey to the potent mix of propaganda and the lure of perceived empowerment offered by these groups. Radicalization has now assumed a new dimension with the message of ISIS being disseminated through social media and the internet as well as through more direct attempts at recruitment through proxies and allied groups. In this new dynamic, the Jamaat-al-Muslimeen and its affiliates, spin-offs and ideological associates with their network among Trinidad’s cities, mosques and economically less advantaged urban neighbourhoods, are ideally placed to act as de facto fronts for ISIS or other jihadi recruiting efforts in Trinidad.

Dr. Sanjay Badri-Maharaj is the author of the books "Indian Nuclear Strategy: Confronting the Potential Threat from both China and Pakistan" and "The Armageddon Factor: Nuclear Weapons in the India-Pakistan Context". He is an independent geopolitical, security and defence analyst and attorney-at-law based in Trinidad and Tobago. He holds a PhD on India’s nuclear weapons programme and an MA from the Department of War Studies, Kings College London. He has served as a consultant to the Trinidad and Tobago Ministry of National Security. He was also a Visiting Fellow at IDSA - New Delhi. HE can be reached at [email protected]