Can India make the most out of the growing Arab-Israeli rapprochement? 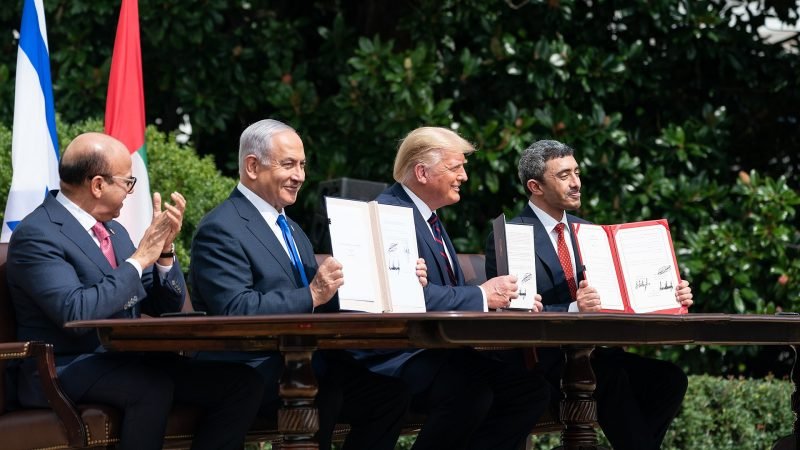 Thanks to the Iranian torrent, Israel now has diplomatic ties in the Arab Gulf!

15 September 2020 marked another milestone in the annals of Middle Eastern history. It will be chronicled as the day when UAE and Bahrain signed the “historic Declaration of Peace” with Israel at the White House, establishing full diplomatic relations with the Jewish state. The United States, which had brokered the deal, had presided over as witness to the signing. Meanwhile, the Palestinian leadership had issued a statement condemning the deal as causing great harm “to the inalienable national rights of the Palestinian people”.

Ever since its birth in 1948, most Arab nations have followed a policy of boycotting Israel till the Palestinian dispute is settled. Israel’s occupation of the Palestinian territories has been a major obstacle in normalizing ties between the Zionist State and the Arabs. In 2002, Saudi Arabia presented the Arab League-endorsed peace initiative, whereby Arab nations promised normal relations with Israel under the condition of full Israeli withdrawal from occupied territories and Israel’s acceptance of a sovereign Palestinian state.  However, the official position of Arab states did not prevent them from forging secret channels of cooperation with Tel Aviv in order to counter various security issues of the region. Over the years, Israel and several Arab states have cooperated heavily on economic, agricultural, security and intelligence through clandestine channels, without the “Arab side having to pay in the coin of formal, diplomatic relations”. Common concerns over Iran have only brought them closer in recent years.

Quite a progress in back-channel talks started metamorphosing into fast rapprochement when Israeli Prime Minister Benjamin Netanyahu visited Oman in 2018. A year later in October, Israeli Foreign Minister Israel Katz declared publicly that he is seeking “non-aggression” agreements with the Gulf States, to deal with the Iranian torrent that had spread its tentacles from Lebanon to Yemen. Thus, the UAE and Bahrain’s change in position is not volte-face at all.

Of course, such a huge foreign policy move by the two Gulf Cooperation Council (GCC) member states couldn’t have been possible without the blessing of the elephant in the room, Saudi Arabia. Palestinian officials in Ramallah believe that Bahrain and the UAE deals would not have happened “without regional backing”. While Saudi Arabia is yet to officially give its two cents on Bahrain’s decision, but it did speak up on UAE’s decision, albeit, after a long silence. Official Saudi line has been a cautious welcoming of the peace deal between Israel and UAE, claiming “any efforts that could promote peace in the region and that result in holding back the threat of annexation could be viewed as positive.” At the same time, Saudi Foreign Minister has harked back to its “commitment to the Arab Peace Plan” as the “best way forward to a settlement of the conflict” (between Israel and Palestine).

Saudis have had their own secret links with Israel over the years. Yet Riyadh is not likely to come out of the closet and establish relations with Tel Aviv, as a leadership role in the Islamic world ties her to the Palestinian cause, and any move to fixing ties with Israel without securing Palestinian interests will be seen as abandoning of rights of Muslims. At a time when Turkey is gunning for ousting Saudi Arabia from a leadership position in the Ummah, Riyadh can ill-afford to abandon Ramallah even as Ankara extends unequivocal support to the Palestinian cause. Iran’s frequent exploitation of the Palestinian movement to further its own interest in the region has also influenced Saudi’s official position. While Saudi Arabia is likely to keep its relationship with Israel quiet, Oman is expected to follow UAE and Bahrain’s lead.

Iranian Torrent: The centripetal force behind the bond between Israel and the GCC

The driving factor that has brought the GCC states and Israel together is Iran. The Shi’ite regime has built a network of allies and proxy forces from Iraq to all the way up to Lebanon. In other words, Iran today boasts of controlling a “Shia crescent” — a land corridor stretching from Tehran to the Mediterranean. Iran has long desired a ground link from Tehran to Lebanon, where Hezbollah, the Shi’ite militant movement, has emerged to be its most formidable ally in thwarting Saudi Arabia and US’s interests in Syria and Iraq. Hezbollah has also managed to emerge as a formidable adversary to Israel. Tehran’s backing of the Houthi rebels in Yemen is also part of its wider Shi’a crescent strategy to confront the Saudis. Iran’s continued violations of its uranium enrichment limits set under JCPOA have threatened her Arab neighbours. For Israel, Iran Nuclear Programme is an ‘existential security threat’ because of repeated calls by the Iranian leaders to have the Jewish state ‘wiped off from the map’.

Therefore, it has become imperative for Israel and the Gulf states to bury their differences in the face of Iranian belligerence. The urgency to make peace with each other has only increased with their ally; the United State’s slow but impending withdrawal from the Middle East. US-retreat from the region will create a power vacuum that the Turkish, Russian, and Iranian-backed proxy forces will dash in to fill. Such shifting geopolitics could pose new threats to Israel and GCC, and to the United States itself. So it has been a priority for the Trump administration to forge a closer relationship between its American allies to create security architecture to protect American interest as well as the interests of its own in the region. This was evident from the U.S. led security conference in Warsaw in February 2019 for ‘peace and security’ in the middle east with the ostensible aim of isolating Iran by creating a coalition between Israel, Saudi Arabia, the UAE and several other European countries.

A Game Changer for India?

India stands to gain from the growing rapprochement between Israel and Gulf states. India and Israel have emerged as natural allies in their fight against Islamic radicalism and both countries in 2018 elevated their ties to the “strategic partnership” with strong commitments towards combating growing radicalisation and terrorism. However, in the absence of any formal diplomatic relations between Israel and many Islamic nations; India had to battle a perception that its security cooperation with Israel was actually a tacit anti-Islamic alliance. Pakistani media often talks about a “Hindu-Jewish, Brahmin-Zionist” nexus conspiring to threaten and undermine the larger Islamic world. Now that UAE and Bahrain have established ties with Israel, other Gulf sheikhdoms are expected to follow their lead which will absolve India from giving ritualistic assurances to the Islamic world. India already has a comprehensive strategic partnership with UAE involving economic, defence and counter-terrorism collaborations, while Bahrain joined hands with New Delhi to enhance cooperation in the field of security, counter-terrorism and the exchange of intelligence and information.

New Delhi can also hope to finally have Washington fully focused on the Indo-Pacific region to counter the China challenge. In Beijing’s calculus, the US entangled in the Middle East provides China greater freedom to pursue its irredentist goals in the South China Sea (SCS), thus posing a serious threat to the region’s “freedom of navigation.” Greater cooperation among American allies to protect itself from adversaries will allow the United States Navy to tether away from the Gulf and pivot towards Indo-Pacific, which is right now the epicentre of world affairs and of vital interest to India.

Anubhav Shankar Goswami is an Alumnus of the University of Delhi and Indian Institute of Technology-Guwahati (IITG), currently pursuing Independent research on India-Israel strategic relationship.