WHO & China: Culpability for the Pandemic 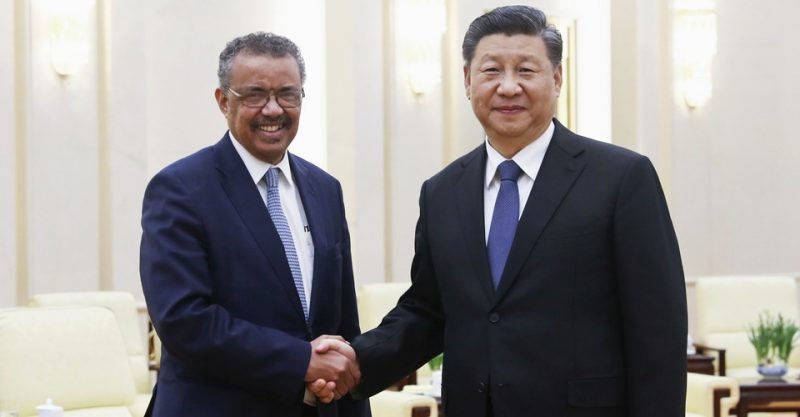 “There shall come over the whole earth an intense darkness lasting three days and three nights. Nothing can be seen, and the air will be laden with pestilence… He, who out of curiosity, opens his window to look out, or leaves his home, will fall dead on the spot… The air shall be infected by demons who will appear under all sorts of hideous forms.”

The apocalyptic prophecy- The three days of darkness predicts the end of time with universal darkness and tormenting plagues. If we cast aside the predicted pall of darkness, the prophecy indeed has come true. Humanity is being cursed with the notorious coronavirus (COVID-19). This tiny nano creature has spelt doom for millions of people and continues to create an impending fear on all of us. We have witnessed the ever-bustling roads going silent, the unprecedented local trains coming to a halt, shops being ransacked of all essentials and humans no more preferring to be social animals. Our worst fears have come true. With the world’s powerful economies suffering a meltdown, stock-markets collapsing, labour exodus and yet the antivirus out of our reach, the writing is on the wall. Meanwhile, people at home are keeping a weather eye on the news just to find out the incessant rise in the number of positive cases and hope that this soon comes to an end. However, life would have been normal with city roads still busy, offices running, people going for a walk with their pets; if China was to nip it in the bud at the earlier stage.

China, the birthplace of this virus is accused all over the world for this mayhem. The United States also speculates it to be an engineered virus that leaked out from a lab in Wuhan city in China. The resentment and condemnation grew when China gave a cold shoulder towards requests demanding information regarding the virus in the early months when every country desperately needed it to avert it from reaching its shores. As a result of this whitewashing, the dreadful nightmare came true. Every country came under the clutches of coronavirus and till today, it is relentlessly adding numbers of positive cases on its scoreboard. Amidst this crisis, the world pins its hope on the United Nations agency- World Health Organization. It has regularly published guidelines for health-care workers, supplied PPE kits, medical supplies, educates countries on successful contact tracing and is constantly involved in research and development. Despite executing its duties, it too has landed itself in hot water. The world on one side is pairing China and WHO and is conspiring WHO as a puppet in the hands of China.

The Origin and Spread

Coronavirus emanated in mid-December in a wildlife market in Wuhan. The local doctors, whom the very first patients visited, considered their illness more than a common cold and admitted them to specialised hospitals. While treating them, the doctors at the hospital surmised this mysterious new pneumonia to be Severe Acute Respiratory Syndrome (SARS) virus. However, instead of reporting to government health officials in Beijing, they relied upon local health officials who hesitated in sharing the bad news and concealed the information, leaving Beijing completely unknown about the ticking time bomb and ultimately delayed the government’s response. The local bureaucrats instead of curbing the spread of the virus, repressed the doctors who tried to raise the alarm and accused them of “spreading false rumours”. Even during the 2002 SARS outbreak in China, due to the same kind of response given by local bureaucrats, the government failed terribly in its fight against the virus. Thus, it is been seen that deceitful bureaucracy in China is the main reason for letting a localized outbreak turning into a pandemic. The central government became aware of the virus through whistle-blowers, as China calls them. Even after the involvement of Beijing, the local officials set a narrow approach and ordered doctors to trace patients only in connection with the wet market. Later on, the central authorities too deflected from being transparent but this time to the whole world.

On 31st December China alerted the WHO on this unknown pneumonia but it refused to share full genome sequence with it. In the month of January, China confirmed recurrence of SARS virus but it asserted that there is no clear evidence of human to human transmission albeit suppressed doctors had detected its evidence. The government intentionally misinformed the citizens of Wuhan. Being assured, they travelled to different parts of China and all over the world during the Chinese New Year holidays unwittingly carrying the bloodthirsty virus. Through its patchy conversations with China, the WHO too received the misleading information and it thus passed on the same to every country. Whilst China was downplaying the virus and squandering time, the WHO had offered to send a team of its scientific observers and experts to Hubei province but China dismissed its demand. By January 20, China had confirmed “limited human to human” transmission of this virus but it was too late. By this time first coronavirus cases started appearing outside China. Had China been receptive enough and had promptly disseminated its information about the virus, the great adversity under which the world is reeling would have been avoided. According to a recent study, stringent action just a week earlier in mid-January could have cut the number of infections by two-thirds.

“WHO” is at blame

The world is throwing jibes at the WHO for its futile stratagem for dealing with China and getting succumbed under the Chinese authority. Moreover, Taiwan claims that it had warned WHO about the possibility of conveyance of this virus via humans as early as 31st December but WHO did not bat an eyelid. After emerging from hibernation, China agreed for a meeting with WHO. A day after this meeting, WHO’s director-general Tedros Adhanom, gave a quite contrasting reaction to what the world was expecting. Instead of calling out on China and censuring it for the skulduggery it had committed, the WHO backed China with its fawning eulogy and lauded its draconian lockout which had cut off Wuhan from the rest of the world on 23rd January. Also, the director-general advised not to put a ban on travel to China. He even delayed the declaration of COVID-19 a global health emergency by one week which exacerbated the situation further. The western countries, especially the US have castigated WHO for its allegiance to China and even branded it as “China-centric”.

Applause for a cause

In the first week of February, the WHO’s team of experts finally got an entry in China. Had WHO used coercion initially in getting out the information, its experts would have never landed in China. Soft diplomacy and the non-confrontational strategy paid dividends. The WHO had successfully coaxed China through sycophancy. Also, it has been seen since the past decade that WHO adopts “a defensive approach rather than an aggressive one” during a pandemic. If we further analyse this game plan, we come to know that had WHO staunchly believed on Taiwan’s inputs, it would have angered China and would have been a sticking point in its co-operation. Also, it is a quite unheeded fact that WHO is only an advisory body. It can give recommendations but cannot enforce them, unlike the World Trade Organization. Thus, the WHO, being bereft of power cannot call China out or challenge it politically.

Eye of the Eagle

If you look from Donald Trump’s eyes and from the perspective of the USA, WHO does seem susceptible to China’s influence. There are a few underpinnings to this argument. In recent years, China’s contributions to the WHO has increased by 52% and it stands at $86 millions. Though it is the pea-sized amount before substantial contributions of US, China’s stake does make a difference especially when it is experiencing shortfalls in funds and the US threatening to cut off its funding to WHO permanently. Also, during the WHO’s director-general elections in 2017, China was a well-wisher of candidate Tedros. It is therefore assumed that he had a soft corner to China as a way of paying dividends.

Apart from WHO and China, the imputability for this pandemic also rests upon other nations for being nonchalant and initially ignoring the recommendations of WHO. They are now trying to obscure their own failures by playing the blame game.

Today China is trying to free itself from its sins through its mask diplomacy. However, the irony lies in the fact that it is trying to be in the good books by putting a big mask on its wrongdoings. While WHO is sailing in the turbulent waters of the US and China, it urges the world to depoliticise the pandemic and maintain mutual co-operation which is the greatest antibiotic on human-engineered hostility virus. Once we destroy it, we would be only a few steps away from smothering this deadly virus.

Anupreeta Salve is a student of Political Science and International Relations