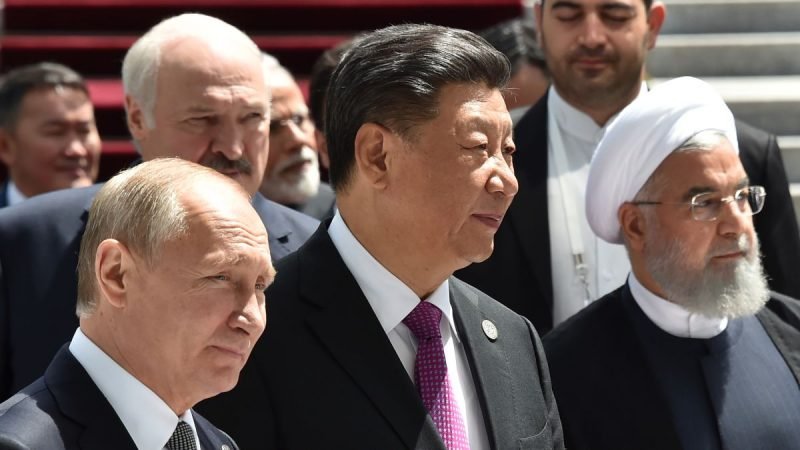 Iranian military cooperation with Russia and China was on full display as they held large-scale joint drills in the northern part of the Indian Ocean and the Gulf of Oman in December 2019. The drill was conducted amidst increasing tensions between Iran and the United States in the Persian Gulf and it is referred to as “Maritime Safety Belt”.

The head of the public relations department of the Islamic Revolution Guard Corps (IRGC), Brigadier General Ramezan Sharif said, “The wargames held by the three big states of Iran, Russia and China had the important message of security in the region to the regional countries.” “Another important message of these drills was addressed to those countries which attempt to distort regional security, led by the US,” he added.

Tensions increased in the region as numerous international merchant vessels were attacked last year. The United States believed it was Iran that should be held responsible for attacks but Iran denied any such wrongdoing.

This naval exercise was conducted in response to the American manoeuvres in the region. In particular, to the International Maritime Security Project, spearheaded by the United States, which was developed last year as a patrolling mechanism to protect oil tankers in the gulf and surrounding seas. The exercise included tactical drills such as target practice and rescuing ships from assaults and fires. In addition, there were also practices that focused on fighting terrorism and piracy, and participants shared information and experience about naval rescue operations.

The exercise was launched from the port city of Chabahar in south-eastern Iran. The port is located near Iran’s border that it shares with Pakistan, and was built with the aid of India and is operated by India. The Gulf of Oman, where the drills took place, is a critical passage which connects the Arabian Sea to the Strait of Hormuz. Its significance derives from its geological position as it is located between energy producers Iran, Iraq, Kuwait, Saudi Arabia, Bahrain, Qatar, Oman, and the United Arab Emirates. The waterway is used to transport around 30% of all sea-borne crude oil globally.

Iranian navy chief Rear Admiral Hossein Khanzadi said, “the objective of such an exercise is obtaining collective security and assisting in securing the northern region of the Indian Ocean, which is today witness to certain incidents such as maritime piracy.” The message, he said, was “that these three countries have reached a meaningful strategic point in their relations, with regard to their shared and non-shared interests, and by non-shared I mean the respect we have for one another’s national interests.”

Both Russia and China have strategic interests in strengthening ties with Iran; Moscow is operating with Tehran in Syria’s ongoing conflict, while Beijing is seeking to increase oil imports from Tehran in defiance of American sanctions. More significantly, the important factor which links the three countries is the progressing opposition to the United States and the Trump administration. In recent times, it can be witnessed that all three countries, Russia, China and Iran, have been using the coronavirus to spread disinformation and conspiracy theories about the United States. All three are focused on slandering the image of the United States globally as they attempt to persuade the public that the virus was a weapon produced by the Americans to target China.

Rear Admiral Gholamreza Tahani of The Iranian Armed Forces (IAF) said that “the message of this exercise is peace, friendship and lasting security through cooperation and unity…[and] to show that Iran cannot be isolated.” He added, “No single country can guarantee the security of the oceans. For this purpose, a collective effort is needed. To secure the ocean, countries are seeking synergy and convergence while holding joint naval exercises in oceanic waters.” An Iranian state television report claimed that the drills as signalled a “new triangle of sea power” in the region, and quoted Rear Admiral Khanzadi’s bold declaration: “Today, the era of American free action in the region is over, and they must leave the region gradually”

The naval exercise was also seen as a sign of deepening relations between Iran and China. After China’s secondary sanctions waiver expired in May 2019, it continued to buy Iranian oil in defiance of the United States. A report by Syed Fazl-e Haider for The Jamestown Foundation stated, “Iran granted the state-owned China National Petroleum Company (CNPC) advantageous contracts to develop controlling stakes in some of its largest oil reserves and Chinese dealmakers were able to lock in promises for cheap crude oil and liquid natural gas (LNG) for years to come.” Mohammad Javad Zarif, foreign minister of the Islamic Republic of Iran had quoted last year, “Today, China has become an indispensable economic partner of Iran and the two countries are strategic partners on many fronts.”

Washington was not pleased with the naval exercises and this was expressed when The U.S. State Department stated in a press brief, “Now is not the time for governments to be doing any sort of military exercises with this regime (Iran).” They added, “We think now is the time to be sanctioning the Iranian leadership for the human rights abuses that it has committed against its own people and to be diplomatically isolating the regime in every way possible.”

Secretary of State Mike Pompeo has explained that Trump administration’s policy toward Iran is designed “to keep America safe, to keep the Middle East more stable, and to enable the Iranian people to convince the regime that it needs to change its ways in the most fundamental and basic way, to just ask Iran to behave like a normal country.”

It seems that Russia, China and Iran are taking advantage of United States’ gradual withdrawal from its leadership in the international arena and are seeking to take cooperative actions in the realm of security to highlight their capabilities and prowess. There is an added concern for countries such as India as there is a possibility of additional partners like Pakistan to join the strategic partnership.

The most recent display of comradery between the trio took place last month in May 2020 as Russia and China sought to protect Iran from the threat of U.S. sanctions. Both Russian Foreign Minister Sergey Lavrov and the Chinese government’s top diplomat, Wang Yi have written letters to UNSC outlining their defence for Iran against the renewal of sanctions.

Russian Foreign Minister Lavrov, in his letter, blamed the United States of being “ridiculous and irresponsible.”  He added, “This is absolutely unacceptable and serves only to recall the famous English proverb about having one’s cake and eating it.” Mr Wang Yi wrote in his letter, “The United States, no longer a participant to the JCPOA (nuclear deal) after walking away from it, has no right to demand the Security Council invoke a snapback.”

Both Russia and China have emphasised that they are not in favour of reimposing an arms embargo on Iran which will force the United States to attempt to impose sanctions snapback under the Iran nuclear deal which Washington is no longer a participant of.