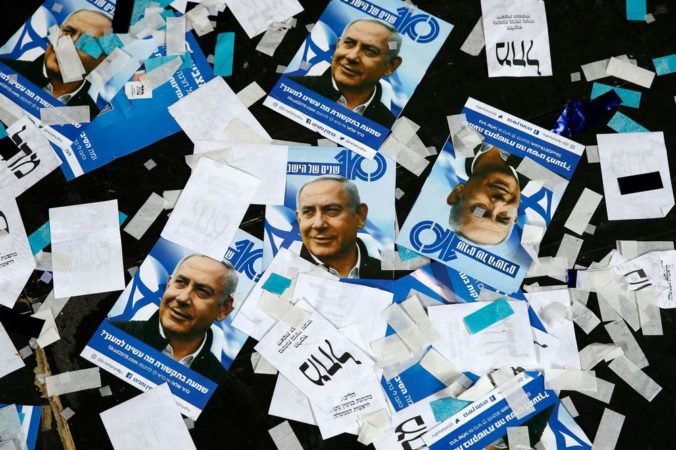 Israel’s upcoming election has remained the buzzword in the global media over this weekend. The only issue which is being discuss from the Israeli election is Netanyahu himself, who is seeking a fifth term as the Prime Minister of Israel. Earlier, the elections in April 2019 resulted in no party being able to form a government. This time everyone’s hopes are high despite the early predictions showing neither of the parties securing an outright majority.

Netanyahu actively has played up his conservative, national security-first credentials in the face of his inexperienced rivals in the run-up to Tuesday’s election.

However, Avigdor Liberman, former defence minister of Israel, blocked his erstwhile ally Netanyahu this April from forming a governing coalition, sending Israel back to an unprecedented do-over election.

Pro-Palestinian parties are also campaigning this election against Bibi. Campaign posters for the Arab Joint List, an electoral alliance of four Palestinian parties, are visible across Israel. Their entire campaign is backed by their slogan, “Our unity is our strength”.

With the United States-sponsored peace talks having collapsed in 2014 and showing no sign of revival, Netanyahu has dispensed with his past professed willingness to negotiate on the creation of a Palestinian state in Israeli-occupied land.

He has been buoyed by the support of US President Trump, who recognized Jerusalem as Israel’s capital and moved the US embassy from Tel-Aviv to Jerusalem, which his predecessors merely used in their election campaigns.

Moreover, he validated the Israeli occupation of Syrian Golan Heights and called it Israeli land, which was captured by Israel from Syria in the six-day war in 1967 and later annexed and settled it. Most of the world powers oppose this Israeli move including Russia and China

With an eye on rallying populist support, Netanyahu has said repeatedly that he plans to extend Israeli sovereignty over West Bank settlements – a likely precursor to their annexation – and has announced his intention to annex the Jordan Valley, a large swathe of the West Bank, if re-elected. The plan drew condemnation not only from Arab leaders and Palestinians but Russians too,

On the other side in Gaza, Bibi has overseen several uncertain military confrontations that have not put paid to irregular cross-border rocket attacks on Israel. In the run-up to the election, he has warned to escalate the fight against the Islamist movement Hamas which is dominant in Gaza.

The Islamic Republic of Iran

In his meeting (September 12) with Russian President Vladimir Putin just before elections in Israel, Netanyahu called for a free rein for Israel to act against Iran. His meeting with Putin was to discuss security coordination in Syria.

Israel has targeted Iranian elements in Syria with hundreds of strikes in a bid to prevent Tehran from establishing a permanent military presence there.

Both Russia and Iran, as well as Iran-backed Lebanese militia Hezbollah, have backed President Bashar al-Assad in the Syrian civil war.

Netanyahu has also taken some of the credit for the United States’ firm stance, under Trump, against Tehran and for an increasingly public entente with Israel by Gulf Arab states that share its fears about Iran.

Israel’s attorney-general has stated his intention to charge Netanyahu in three long-running corruption cases, pending a pre-trial hearing next month. bibi denies the charges and has cast the allegations against him as a media-abetted witch-hunt by political enemies.

Yet even if indicted, Netanyahu as a Prime Minister of Israel would not be under a strict legal obligation to step down. His right-wing and religious allies are not expected to pressure him to resign, even if he is charged.

Bibi’s rightist tack has meant he had relied on religious Jewish coalition partners. That has spelt concessions to ultra-Orthodox Jews on their welfare payouts and exemptions from mandatory military service – a hot-button issue for many secular, middle-class Israelis.

Closely looking at Netanyahu’s policies, Israel gains the title of start-up nation where investments spawning from all corners of the world, especially Chinese. The economy seems to perform solidly, something Netanyahu has attributed to free-market policies he established while finance minister. However, lagging productivity and long term challenges barely has a mention in the entire campaign, instead, the crucial issue for Israelis voting on September 17 is whether you’re for Prime Minister Benjamin Netanyahu or not.