Demand for Sindhudesh in modern Pakistan? 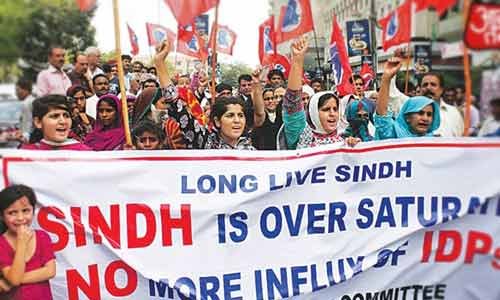 In today’s Pakistan Sindh is known for its distinct culture which is strongly influenced by Sufism, an important marker of Sindhi identity for both Hindus and Muslims in the province. It is famous for the enormous number of saints and mystics who lived there and preached peace and brotherhood. Several important Sufi shrines are located throughout the province which attracts millions of annual devotees. Karachi, the capital of Sindh, is Pakistan’s most ethnically diverse, with Muhajirs, or descendants of those who migrated to Pakistan from India after 1947 and throughout the 1950s and 1960s, making up the majority of the population.  As a result, Karachi and other urban centres of Sindh have seen ethnic tensions between the native Sindhis and the Muhajirs boil over into violence on several occasions. In the context, the Sindhi nationalist movement asserts that Sindhis, an ethnolinguistic group mainly found in Pakistan and India are a nation. The Sindhi nationalist movement’s demands have ranged from greater cultural, economic and political rights, to political autonomy, to outright secession from Pakistan and the creation of an independent state referred to as Sindhudesh.

Beginning of the problem

After partitioning the majority of refugees who left India by force or by choice from areas other than Punjab came to Sindh and settled principally in the cities, such as Karachi, Hyderabad and Sukkur. The Muhajirs became such a large percentage of urban Sindhi population that they gained a great measure of control over the region’s cities. The Muhajirs, who were economically and educationally better off than Sindhis, pushed the Sindhis out of the competition. They captured government jobs and business. Further, although the Indian Punjabis had been able to assimilate quickly into the population of Pakistan’s Punjab, the Muhajir failed to do so to any significant degree in Sindh creating sharp divisions in the Sindhi society. Moreover, as time progressed, the Punjabi dominated government in Islamabad came to join in an alliance with the Muhajir middle classes for mutual political support. This led to preferential treatment’ of the urban-centred Muhajirs by Islamabad at the expense of more rural Sindhis. At the time, Liaquat Ali Khan, the first Prime Minister of Pakistan, a Muhajir, was the principal leader of the Muhajirs. In the beginning, many of Pakistan’s top bureaucrats were Urdu-speaking and exercised a high degree of influence over the country in the early formative years. This civil-military nexus brought Punjabis and Urdu speaker close to each other. One additional contradiction appeared in the ethnicity of Sindh since the Baluchs and Gujaratis emigrated in Sindh in the early years and were accepted as Sindhis. In the changed circumstances the Sindhis realised that they are not only to deal with Punjabi domination of the state but also to compete with the relatively advanced Muhajirs. During the first decade after partition, the Urdu-speaking Muhajir along with the Punjabis had come to occupy a dominant position in Pakistan’s political and bureaucratic arena.

The liberal or leftist approach to the ethnic problem in Sindh considers the economic contradictions within Pakistan, especially Sindh, socio-economic structure, responsible for creating class conflicts along the lines of rural versus urban, feudal versus middle class and ruling elites versus have nots. It also looks at the question of nationalities in a deterministic way, tracing its origin in the Pakistani capitalist order which it considers to be a derivative of the neo-colonial world order, carried on by the privileged classes in Pakistan. Combined with demographic and economic statistics, linguistic controversy played a crucial role in ethnic mobilisation. The imposition of Urdu as the national language by the ruling class on other linguistic groups alienated the Sindhis. The Sindhi language and culture was overshadowed by the Urdu language and Hindustani culture of the Urdu speaking people, which politicized the Sindhis. Feroz Ahmed, a leading Sindhi intellectual, pinpointed the causes for the resurgence of nationality sentiments in Sindh and recounted, ‘Along with immigration the ideological orientation of the power elite as the main reason for Sindhi alienation. Islam, the integrity of Pakistan and the Urdu language became the code words for national domination. In the name of Pakistan’s unity and integrity, the very foundation of unity was eroded’. In addition, he blamed the exploitation of Sindhi resources by the Punjabis and felt that Sindh has always suffered because of conspiracies against it. The refugees replaced the Hindu exploitative class and even Karachi was initially taken away from Sindh.

Political fight for the Sindhudesh

In the circumstances, the first Sindhi supported the political movement for the creation of a Sindhi state called Sindhudesh was floated by some Sindhi nationalist parties. The movement is based in the Sindh region of Pakistan and was conceived by the Sindhi political leader G.M. Syed. It emerged in 1967 under the leadership of Syed and Pir Ali Mohammed Rashdi in opposition to the One-Unit policy, the imposition of Urdu by the central government and to the presence of a large number of Muhajir settled in the province.  Later in the mid-1980s, Sindhi disenchantment with the Pakistani government erupted into open warfare. During Zia’s regime, guerrilla units raised in the Sindh confronted the Punjabi federal troops from Islamabad. However, poorly organised and ill-prepared insurgency was eventually crushed by the use of the coercive power of the state. However, Sindhi ethnonationalism, based on a separate Sindhi identity, had made inroads among young intellectuals largely due to the efforts of G.M. Syed who had been a one-time supporter of the demand for Pakistan. He was a charismatic leader with articulate ideas and sufficient economic resourcefulness to support his espousal of what was later known as Sindhi nationalism. He began his own political movement known as the Jeay Sindh Movement. In the late 1980s, he became the unchallenged leader of Sindh National Alliance (SNA), which brought together various ideological groups but failed to win any seat in the 1988, 1990 and 1993 elections.

In post-independence Pakistan, the machinations of the Pakistani state convinced Syed, that Sindhis would be marginalized in setting up and later in 1972 he proposed the formation of an independent nation under the name ‘Sindhudesh’.  It was a call for the liberation and freedom of Sindhis from Punjabi Muhajir-imperialism. Sindhi separatists totally reject the Parliamentary way of struggle for getting freedom and rights. The concept of Sindhudesh is also supported by the Sindhi Diaspora including Sindhis in India, most of whom had to be relocated out of Sindh after Partition, leaving behind their property as evacuee trust under reciprocal government supervision. However, with the continuous defeat in elections held in the 1980s and 1990s it was largely weakened, although Syed later advanced his position towards openly demanding separation from Pakistan and the build-up of an independent Sindhudesh in his book, ‘Heenyar Pakistan khey tuttan Khappey and Sindhudesh – A Nation in Chains’.

Recently the movement for Sindhudesh re-emerged after the death of Benazir Bhutto, the former Prime Minister of Pakistan (2008) and also gained popularity, Sindhi nationalists judge that Sindh has been used to the advantage of people from non-Sindhi ethnic groups citing the dominance of Muhajir people in key areas of Sindh including Karachi, large scale migration to Sindh from other regions of Pakistan, including Khyber Pakhtunkhwa, alleged Punjabi dominance in defence sector, an increase in Taliban migrants moving to Sindh; as well as terrorist-related attacks on the region and believe this to be the cause of recent troubles in Sindh. In the province, now there are many pro-Sindhudesh organisations such as the Jeay Sindh Quami Mahaz (JSQM), World Sindhi Congress (WSC), Sindhudesh Liberation Army (SDLA), Jeay Sindh Tarraqi Passand Party, Jeay Sindh Muttahida Mahaz (JSMM), Sindh Nationalist Movement Party (SNMP), and Jeay Sindh Students’ Federation, as student wing of various separatist organisations struggling for the freedom of Sindhudesh following the ideology of G.M.Syed, founded in 1969.

Bashir Khan Qureshi is the chairman of Jeay Sindh Quami Mahaz, who expressed his desire for the Urdu speaking community to integrate with Sindh, calling them ‘brethren and part of Sindhi nation. The Sindhi nation has been waiting for the last 64 years to secure independence since Punjab has assumed all the powers of the federation, including civil bureaucracy, military and judiciary, while all the resources of Sindh have been placed at the disposal of Islamabad’. Jeay Sindh Quam is the main guardian of Jeay Sindh theory, a legacy inherited from the G.M. Syed and it believes in peaceful independence based on non-violence. This apart, Jeay Sindh Muttahida Mahaz is one of the major separatist political party in Sindh, Pakistan, that believes in the separation of Sindhudesh from Pakistan.

In contrast to the above, is the Sindhu Desh Liberation Army, a terrorist organization based in Sindh province. A series of minor blasts took place on railway lines, the attacks carried out between November 2010, and February 2011 were claimed by the SDLA, who left pamphlets on the scene that mentioned ‘atrocities’ being carried out against Sindh and promising to continue their struggle till Sindh was granted “freedom”. The SDLA claims moral inspiration from the Baluchistan Liberation Army (BLA), which they term as a response to “Punjabi domination” of the Pakistani State. Recently a new left-wing party, Sindh National Movement Party, for a politically, culturally, economically and geographically independent Sindh was formed in December 2011. It wants to see Sindh as it was in 1843 before the British conquered it.

Despite all these, till date, no Sindhi nationalist party has been ever voted into power in Sindh at any level of government. Even some nationalist parties and associations are banned for terrorist, anti-state and sabotage activities by the Pakistani government. In March 2012 a Sindhudesh rally was organized which had a notably low turnout, followed by a freedom march by the pro-separatist Jeay Sindh Qaumi Mahaz (JSQM) which, according to sources, gathered hundreds of thousands of people to demand independence for Sindhudesh. Further, a strike called by the pro-separatist Jeay Sindh Muttahida Mahaz (JSMM) on 25 January 2014, resulted in a complete strike in the province, excluding some areas of Hyderabad, Tando, Allahyar, Matiari and Ghotki. In nutshell, Sindhis feel that they are a separate and full-fledged nation, so they have been struggling for self-determination of Sindh