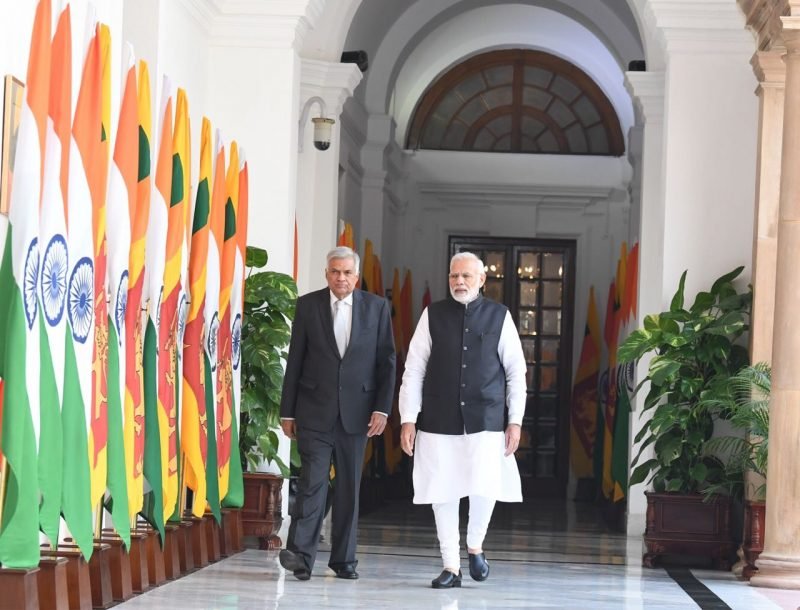 If there is one country where everything has gone wrong, it is India’s neighbor, Sri Lanka. Since the country gained independence from Britain in 1948, it has not seen the turmoil that it is witnessing now. The people are so furious and frustrated that they have hit the streets to summarily throw the ruling class into a bin.

When a neighbor is in deep despair, aren’t the neighboring countries morally bound to extend a helping hand? They should. And that is what India is doing now. But the generosity being extended has given rise to geopolitical debate by opinion makers and analysts across the globe. However, Sri Lankans are left with no energy to think about anything other than receiving whatever aid, in whatever form, whichever country provides to them.

Today, India tops the list of countries which have been more compassionate to Sri Lanka than any other country by providing no less than $3.8 billion. It is of huge assistance when India itself is struggling to revive after the COVID-19-induced economic downturn. How does one read the generosity of India? The debt crisis and political anarchy of the island country have been there for the last two years. And, India has moved closer to Sri Lankan Prime Minister Ranil Wickremesinghe in 2021  and now the assistance has gone up.

However, compared to India, China has ensured that it is strategically closer to Sri Lanka over the last 10 to 15 years. Beijing deliberately gave low-interest rate loans and sanctioned projects to the island country. The country fell easily into the debt trap laid by China. While New Delhi did not show a keen interest in engaging with Colombo, China, since 2015, has become the single largest lender to Sri Lanka. China turns out to be the biggest exporter to Sri Lanka. But during this peak crisis period, China offered only $42.4 million to Sri Lanka. The distressed country has also not shown any eagerness to receive any sort of help from China, including fuel. The equations are changing. Sri Lanka has slowly realized how it is getting caught in the trap laid by Beijing. But it is a hard way of learning.

The communist country is the largest investor in Sri Lanka – to the tune of $15 billion. It is the leading source of official development assistance (ODI) and foreign direct investment (FDI). A majority of its financial assistance has been in key sectors like energy and infrastructure. China’s private investment in Sri Lanka is estimated to be $2 billion. In 2021, the island country’s external debt was 10% to China and 2% to India, while the market borrowings were 47%, according to the data put out by the Sri Lankan government.

China’s major projects in the island country are the Hambantota Port Development and the Colombo Port Project, which are backed mainly by China’s ‘debt-trap’ loans. China’s intention is very clear – to have strategic control of vantage points on the global sea trade routes in the Indian Ocean Region, mainly to scuttle India’s growth. China has made its private companies establish their foothold in Sri Lanka. One example is the Norochcholai Coal Power Plant, built by China Machinery Engineering Corporation. It is China Harbour Engineering Company which is funding to the tune of $1 billion in Hambantota, which is seen as a project which sucked Sri Lanka’s finances. The intention of China is crystal clear – to clear the way to implement the One Belt, One Road mission. The list of projects funded by China is long.

At this crisis juncture, what do these investments from Beijing mean for Sri Lanka? Probably nothing because the chaos reigns supreme where even getting food is a huge challenge. Then what happened to the billions of loans and grants given by China? Was there huge corruption in the form of kickbacks given by the investors to policymakers, including politicians, in Sri Lanka? Is all the prevailing chaos because of all the loot by politicians? One may not get a reply back with evidence. But definitely, people in vantage points have swindled public money.

Let down by China

If Sri Lanka had made the best of the investment flow, then there would have been employment generation. But the situation is different. People have rebelled to the extent of taking the law into their own hands to thrash their leaders. Sri Lanka, over the years, has been a loan repayment defaulter and thus pushed the country into deep trouble. The grim situation clearly shows that Sri Lanka has failed to make the best use of the investments. The country, after failing to pay debt service, has leased out land to China in many places. It has been reported that Colombo surrendered 100 ha to China as it made an investment of $1.4 billion. Furthermore, China has cleverly used Sri Lanka to advance its geopolitical dominance interests. In 2021, Colombo went to the extent of securing a $148 million currency swap facility from China to tide off its foreign exchange shortage.

Can India be a mute spectator to the sinking of Sri Lanka? No because the Colombo Port is crucial for India as it handles no less than 30% of India’s container traffic. The island country receives about $4 billion in annual merchandise from India. If the situation worsens, Indian trade and commerce will take a hit. India’s private investors in Sri Lanka would be hard hit.

In addition, a disturbed neighbor would always pose a threat to India because of illegal immigration from Sri Lanka. In its own interest, India has to ensure that there is no civil war in Sri Lanka over the independent Tamil State in the island country. In addition, Sri Lanka has to get back to normalcy so that it can clear its debts to India.

Ranil Wickremesinghe, the acting prime minister, pleaded with all countries, including India, to extend financial help. India has responded swiftly to his request.

Is India strategically trying to counter China’s hold over Sri Lanka? The opinions are divided. China’s investments did not help Sri Lanka to become a better country.

Then how will India’s financial aid help? Is the question being raised now? But there are people, such as Arjuna Ranatunga, who was a cabinet minister, who are thankful to India for funding the construction of the Jaffna airport when the work had taken a beating for a lack of funds in 2015.

Sri Lanka has conveniently ignored implementing the India-Sri Lanka Peace Agreement signed in 1987, signed during the regime of Rajiv Gandhi as prime minister. Setting aside all the political issues and concerns, India has stood by the island country in the hour of a major crisis. New Delhi has repeatedly said that it is ready to help Sri Lanka see a quick economic recovery and also build infrastructure. In the current year, India is the highest aid giver among all other countries to Sri Lanka.

India has handed over 44,000 MT of urea and donated nearly 25 tones of medical supplies, rice, and milk powder, among other essentials, to bankrupt Sri Lanka. Even Tamil Nadu has been shipping the essentials to the neighboring country.

The West has huge issues with Sri Lanka over human rights violations. So it is South Asia that has to come to the aid of Sri Lanka. And India is ahead of other countries in extending unwavering support. Even China has appreciated India for rushing to support Colombo. India has the capacity to take the lead in bringing all South Asian countries to help the island country somehow wriggle out of the present mess. It is the debt restructuring of Sri Lanka that needs to be handled deftly with the assistance of the neighbors.

Sri Lanka’s request to Beijing for debt restructuring or additional aid has yet to be heard. India has positioned itself as a trustworthy ally. The largesse from India includes a $400 million currency swap with the Reserve Bank of India and a credit line of $1 billion to supply fuel. New Delhi has facilitated Sri Lanka to defer repayment of loans to the tune of $1 billion.

India’s intentions could be analyzed from many angles. But for Sri Lankans, India is looking like a savior. Through its superfast moves to send aid, India has been able to build a positive perception within weeks. New Delhi is making the best of the opportunity to prove its detractors wrong that it has neglected Sri Lanka while helping other smaller neighboring countries like Bangladesh.

India is aware that Sri Lanka is capable of rebounding, though it may not be immediate. It is a country that has a literacy rate of 93%. It ranks 71 in the global Human Development Index of 2021, much higher than India. Sri Lanka can bounce back to a certain extent once its tourism sector is back in business. All it needs is financial aid, just the way no Greece received it in 2010. In this process of revival, India will benefit in terms of business opportunities as well as reposition itself as a trustworthy neighbor.