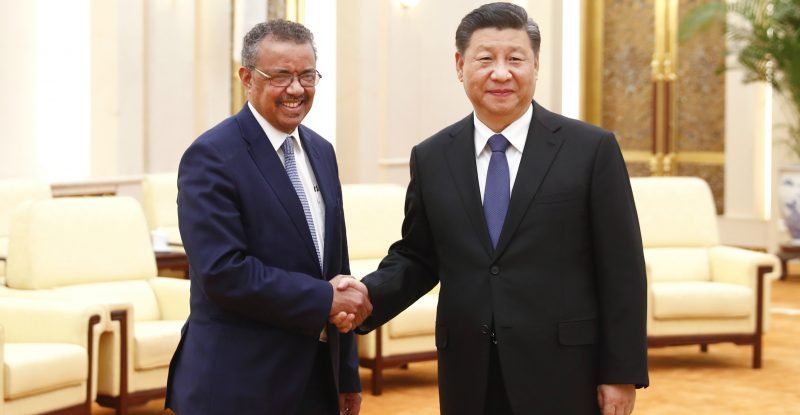 Using its economic and political influence, China has incited the World Health Organization to publish distorted maps undermining India’s territorial sovereignty. While anger aimed at the World Health Organization is justified, India must address the roots of these deliberate and calculated attacks to prevent further attacks and protect its territorial sovereignty.

The distorted map raised anger from India, which is justified, as the map showed India’s Jammu and Kashmir and Ladakh regions as being separate from India. It has been noted that this isn’t the first time the WHO has published distorted maps undermining India’s territorial sovereignty. Indian’s envoy to the UN, Indramani Pandey, condemned the WHO’s distorted maps and called on the WHO to remove the map and replace them with accurate maps.

Many might ask why an international institution such as the World Health Organization would interfere and undermine a specific nation’s territorial sovereignty, what are its vested interests? The answer is quite simple: China. It’s evident from the way World Health Organization’s responded to the coronavirus pandemic, which stemmed from China, that China’s influence has corrupted international institutions.

India and the international community should recognize that the World Health Organization’s publication of these distorted maps undermining India’s territorial sovereignty is part of China’s calculated ongoing attacks on India’s national sovereignty.

China is not a modern nation, it is an evil revisionist empire that has failed to embrace liberal democracy due to its expansionist nature. China’s expansionist nature has pushed it to expand beyond its true boundaries behind the Great Wall and conquer foreign lands and subjugate foreign nations. Even long before 1949, China created distorted maps of the Nine-Dash-Line illegally claiming much of the Southeast Asia Sea, commonly known as the “South China Sea,” as “part of China”. Pointing to past conquests by non-Chinese peoples like the Manchus, Mongols, Tibetans, and even Uyghurs, China has been publishing distorted maps claiming parts of Mongolia, Russia Kazakhstan. Kyrgyzstan, Tajikistan, India, Nepal, and other surrounding countries as being “a part of China.”

China’s attacks on India’s territorial sovereignty have been ongoing since the founding of the People’s Republic of China and its subsequent invasion of the independent countries of East Turkistan and Tibet that border India. In 1954 China shut down the Indian Consulate in Kashgar to prevent India from monitoring China’s building of roads connecting East Turkistan and Tibet through Eastern Ladakh, also known as ‘Aksai Chin.’

The conflict is ongoing as we speak, and there are no indications that China will cease its constant attacks against India’s sovereignty. Using its economic and political influence, China has incited the World Health Organization to publish distorted maps undermining India’s territorial sovereignty. While anger aimed at the World Health Organization is justified, India must address the roots of these deliberate and calculated attacks to prevent further attacks and protect its territorial sovereignty.

India should take a more active approach to end these attacks and fully resolve the conflict with China by formally acknowledging these crucial facts:

Secondly, India has historically never shared a border with China. It wasn’t until China’s occupation of East Turkistan in 1949 and Tibet in 1950 that India would have any “border issues” with China. Furthermore, China violated international law and launched an aggressive attack against India in 1962 and has been illegally occupying India’s sovereign territory of Eastern Ladakh since then.

Thirdly, India’s Government must recognize that India will never be safe from further attacks from China so long as its northern neighbors, East Turkistan and Tibet, remain under Chinese occupation. Thus in this context, India being the world’s largest democracy, must play a more active role in the international fora by supporting East Turkistan and Tibet’s struggle to end the Chinese occupation of their countries and regain their independence.

India must utilize the Tibet Act passed by the United States and initiate similar bills on Tibet and East Turkistan in India’s Parliament. India should formally recognize China’s atrocities in East Turkistan as genocide while also recognizing East Turkistan and Tibet as Occupied Countries and urge other countries in the Free World, especially in the Quad, to do the same. A democratic and independent East Turkistan and Tibet is the solution to addressing the China problem that India and many countries face. India will no longer have border conflicts with China, but it will also avoid a foreseeable water war with China.

India must utilize its unique position as the world’s largest democracy and a rising economic powerhouse to create new international institutions and cooperations to lead the world in addressing China’s ever-increasing threat to humanity. ASEAN states being lower riparian states of the Mekong River similar to the Brahmaputra River for India and Bangladesh, where China has also been diverting water from, are also in grave danger. India must form a consortium with ASEAN nations and prevent China from cutting off access to much-needed natural water supplies that would have a devastating effect on humanity.

Salih Hudayar is an Uyghur independence activist, current Prime Minister of the East Turkistan Government in Exile and the Founder of the modern East Turkistan National Awakening Movement. You can follow him on Twitter @SalihHudayar