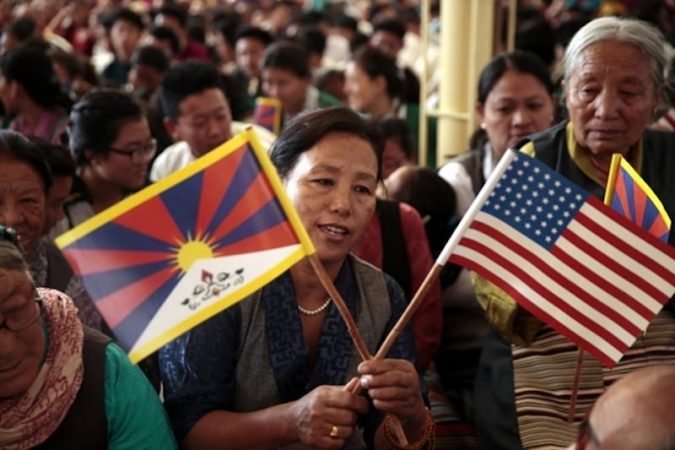 In a major victory for the Tibetan people, the US government passed the Tibetan Policy and Support Act [1] (which is an amended version of the Tibet Policy Act 2002 and will soon to be passed into Law) that imposes sanctions and visa restrictions on the Chinese officials who try to override the procedures of incarnation and selection of spiritual Buddhist heads including the Dalai Lama. It is indeed with much regret that many Indian sinologists point out that India’s hands are tied as far as Tibet is concerned when they shouldn’t be. The Chinese administration for its part has vehemently denounced this move calling Tibet as an internal matter for China. But as far as India is concerned the sharing of border and resources certainly makes a case for India to be actively involved in the region. How can the region which has for centuries served as a religious hotbed for Indian pilgrims not be of its concern and for that matter- Chinese and Indian Buddhist linkages have been the base for free access to this region for centuries now.

India’s intervention in Tibet on two particular grounds cannot be denied – one is Buddhism and second, water resources and on both accounts, India has a positive role to play. The intervention doesn’t have to be necessarily military-based or based on sanctions like the US; though it is necessary to keep that in mind. India has respected China’s authoritarian governance as it has expected China to respect its democracy. Nevertheless, India has historically been close to Tibet through Buddhist missions and should revive that linkage to hold China accountable for its practices or intervention in the religious preferences of its citizens.

The incarnation of the Dalia Lama is not just a Chinese but a global event that affects the expectations of Buddhist people all around the world hence it cannot and should not be restricted within the rhetoric of “China’s internal matters” or else the practices of Buddhism would be compromised. There have been rumours and speculations that the next Dalia Lama is expected to be reincarnated somewhere in East Asia (Laos) and hence, China should treat the reincarnation as an Asian phenomenon even if it does not want any western interference.

There are today more than 500 million people practising Buddhist religion across the world with dominant populations across Bhutan, Myanmar, Cambodia, Tibet, Laos, Mongolia, Sri Lanka and Thailand, with Central populations across China, Japan, India and Nepal following both Mahayana and Hinayana schools of Buddhism. The most primary question is how can China control the reincarnation and deny whether it could occur in any of these East Asian or Southeast Asian countries.

This is a fundamental question that India should bring up at the global level through agencies like the UN. The approach does not have necessarily to be reprimanding but rather inquisitive as to what measures has China taken to communicate with the Buddhist population across Asia to ensure that the correct heir is found? Has China set up a global council on Buddhism having representative bodies from all these countries which have major portions of Buddhist populations? How much credence does China give to their voice in the selection procedures and if not at least some proportional system of representation has to be in place.

When India gave asylum to the Dali Lama decades back the most important aspect that was highlighted was that we supported a spiritual guest in India and not any political figure. By the same measure of argument why has India not stepped up today for the Buddhist community that poses its faith in the “karmic cycles of Buddhist incarnations”.  If India fails to protect their voice we would be indeed letting down the hopes of one of the oldest non-violent cultures that has thrived in India for centuries.

Not necessarily a political stand on Tibetan Buddhism

India does not necessarily have to tow the US foreign policy line and ruin its relations with its neighbour. Unlike the US which has put sanctions on the visits of various officials involved in the subjugation of Tibetan parliamentarians, India should use the Buddhist cultural linkages to make a deeper impression amongst the Chinese Buddhists – both in the mainland and amongst the autonomous regions. This is obviously extremely difficult today given the restrictions imposed by the Chinese on travelling into Tibet and the police-state kind of paraphernalia built across the Tibetan cities. Nevertheless, India should persist and make a case that the reincarnation is not simply a Chinese internal matter and force the Chinese to open the gates for Buddhist societies across Asia.

If need be, India should not hesitate from supporting the US on the Tibetan Policy and Support Act,  which is indicative of turbulent relations between the US and China over the Trump presidency and its policies since early 2000; and showcase its complete support for the Tibetan people. However, since the Biden government is likely to roll down on the impact of this policy it would be in the best interest of India to use the diplomatic channels to resolve the issue of reincarnation, however, if all else fails military option should be kept handy as things are getting worse across the bordering regions.

[1] The Act also makes it US policy to hold senior Chinese officials “responsible for, complicit in, or have directly or indirectly engaged in the identification or installation of a candidate chosen by China as the future 15th Dalai Lama of Tibetan Buddhism” to have committed “a gross violation of internationally recognized human rights”, attracting sanctions under the Global Magnitsky Human Rights Accountability Act.