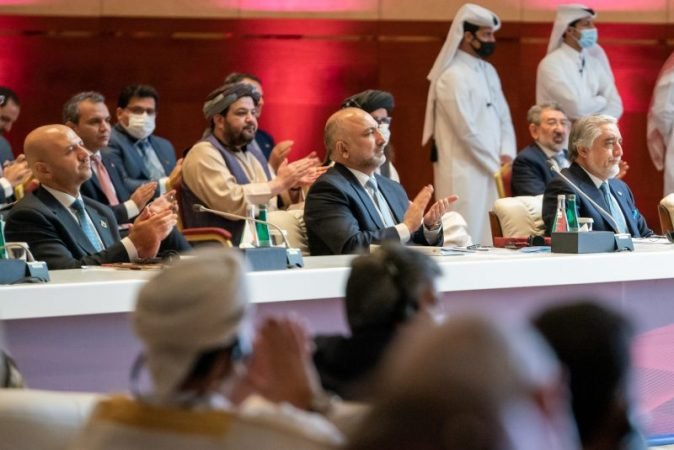 Abdullah Abdullah stressed that there was “no winner through war” and called it an exceptional possibility for peace his move was much appreciated by MIKE POMPEO US secretary of state hailed it as a truly momentous invention.

Taliban did not suggest a truce, restating that Afghanistan should be under Islamic law.

These talks follow a US-Taliban security deal which was reached in February.

Afghanistan has witnessed a long span of almost four decades of conflict which has resulted in thousands of civilians exterminated.

These are the first direct talks initiative between the Afghan government and the Taliban. Until now the militants had refused to meet the government or to hold any peaceful talks calling them American puppets and powerless due to the Afgan government adherence to American outlook.

The two sides are aiming for political reconciliation and to end long time span violence, which started with the 1979 soviet invasion.

The presence of troops led by us in Afghanistan has been nearly for two decades, after launching airstrikes to remove the Taliban in 2001 following the deadly 9/11 al-Qaeda attacks in New York. With 19 years passing by, the conflict has been longest in US history. and this talk was hailed by all the citizens of Afghanistan as they believe that it will bring stability and peace in their region.

One of the high Afghanistan officials Nader Nadery a senior negotiator called it” an emotional, but a very difficult and important day” he made a statement that “All of us have lost loved ones and the country that we love so much has been destroyed… it’s also difficult because you face the people who, as an example in my case, killed my nephew two weeks ago. And we need to pull all the strength to face them, to talk to them.”

Expectations from the talks?

Keeping the conflict and disagreement of the two sides in mind, which has been gradually developed and evolved and continuing. It has been acknowledged that the talks regarding peace and stability is anyhow going to be challenging. Mr Pompeo, who spoke at the opening of the talks, said there would “undoubtedly” be “many challenges” – but stressed that a peace deal would benefit future generations, and also affect how much aid the US provided in the years to follow.

Following him, the head of the Afghan delegation Abdullah Abdullah said that the two sides do not have to accede fully on each of the issues that are before them but can hope for peace accepted and supported by all Afghan citizens.

At the conference Taliban leader, Mullah Bardar Akhund called for Afghanistan to have an Islamic system in which all tribes and ethnicities can live peacefully together.

There is another view that fragile progress made in women’s rights could be at stake in the process, with one women’s rights activist pointing out that “there is not a single woman” in the Taliban’s negotiating team.

The talks have presented an obstacle in front of the Taliban, who will have to bring forward a tangible political vision for Afghanistan. They have so far been vague, stating they wish to see an “Islamic” but also “inclusive” government.

The talks may provide more evidence of how the militant group has changed since the 1990s when they ruled using a harsh description of Sharia law.

In a statement, Nato Secretary-General Jens Stoltenberg said “sacrifices” from “Afghans and our own troops” had helped improve the quality of life for people in the country, particularly for women.

“These sacrifices were not made in vain,” he said. “The talks starting today must preserve these gains to reflect the hopes and wishes of all Afghan men and women.”

Factors that lead to this situation

There was an agreement reached between the US and the Taliban in February regarding the withdrawal of foreign forces in exchange for the guarantee of counter-terrorism. following this, the US and its Nato allies agreed to withdraw their troops within 14 months, while the Taliban committed not to allow al- Qaeda or any other groups to operate in the areas they control.

The deal also provided for a prisoner swap of about 5,000 Taliban prisoners and 1,000 detained Afghan security personnel.

The talks between these two parties were meant to take place in March but got delayed due to the dispute over prisoners exchange because some of the men, Taliban wanted to get free was commanders involved in major attacks. and violence in the country. Though the process was slow but in august, the Afghan government began to free the Taliban prisoners approved by loyal jirga.

Not all of the group of 400 were released straight away, after both France and Australia objected to freeing six prisoners accused of fatal attacks against their nationals, including humanitarian workers. Their release and transfer to Doha on the eve of talks removed the final hurdle.

US-led troops have been present in Afghanistan for nearly two decades, after launching airstrikes to expel the Taliban in 2001 following the deadly 9/11 al-Qaeda attacks in New York. The Taliban, who protected al-Qaeda leader Osama Bin Laden, had refused to hand him over.

At the outset in 2001, the US was joined in its fight by an international coalition, and the Taliban were quickly removed from power. But the militant group morphed into an insurgent force that dug in and launched deadly attacks against US-led forces and the Afghan military, as well as Afghan government officials.

The international coalition ended its combat mission in 2014. The total coalition death toll by that point was nearly 3,500. More than 2,400 US military personnel have been killed. The UK lost more than 450 of its soldiers.

The US continued its own, scaled-back combat operation after 2014, including air strikes. The Taliban meanwhile continued to gain momentum and now control more territory than at any time since 2001.

These talks present an amazing opportunity to the US  as it appears both enthusiastic and desperate in its quest for a negotiated end to a long-pending crisis. It is clearly evident that US attempts to take credit for ending war which will project its strength in afghan soil.

Who all will benefit?

Pakistan, the end of the Afghan war will prove a blessing in disguise. Islamabad has not been in good terms with Washington over the former’s alleged support to the Afghan Taliban. The strained ties have aggravated Pakistan’s ailing economy as the Trump administration has stopped financial aid to it. A helping hand by Pakistan in Afghan peace will surely thaw its relations with the US. That can bring it much-needed financial support from Washington. Islamabad also aims at good ties with the Taliban once the latter comes to power in Afghanistan. Good ties with Afghanistan will not only boost trade with Pakistan but also resolve the huge refugee crisis and its resultant issues like drug trafficking.

Russia too can benefit from the peaceful resolution of Afghan conflict. Moscow is reeling under a series of US sanctions ever since it annexed Crimea and has been suspected of offering covert support to the Taliban. Moscow expects that by helping in resolving the Afghan crisis, it can prove its leadership role in peacemaking in the world, gain some relief in the sanctions and ensure that the future Afghan government (a coalition government with the Taliban) maintains goodwill and a positive approach towards it.

For China, a peaceful and stable Afghanistan is an arcadia. Beijing has been blamed for human rights violations in its western province, Xinjiang. Recently, many countries wrote to the UN, asking the institution to take care of China’s claimed worse human rights record in the restive province. Though Beijing called it a lie and some 52 countries co-signed a letter in response to defend it, the communist state is not comfortable with the state of affairs. Moreover, China’s Taiwan issue, the trade war (with the US), and the safety of  CPEC is challenging China in different ways. To take on these issues, Beijing looks forward to improving her ties with America and, therefore, seems focused on helping Washington resolve the Afghan crisis.