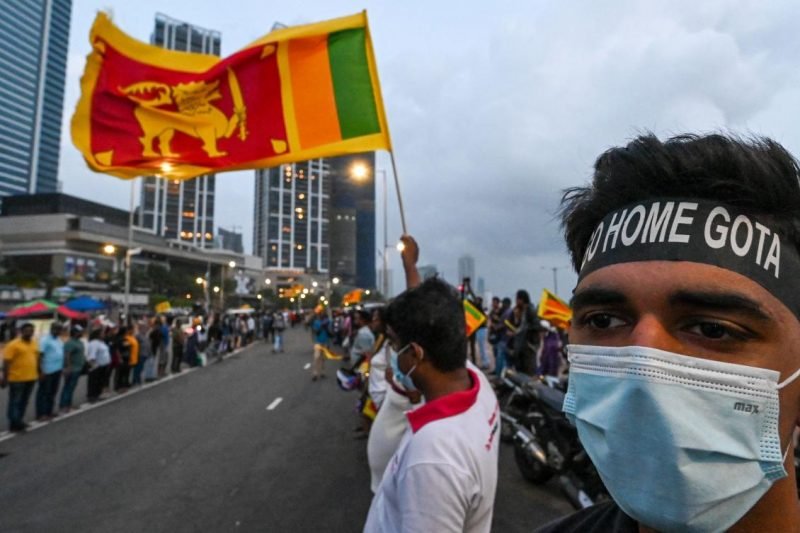 What is happening today in Sri Lanka is result of years of mismanagement. The country has run out of money and the economy is worsening. Sri Lanka relies on imported goods even for basic products and is an import-dependent country. Because of the low foreign currency reserve, it has become increasingly difficult to import these and has resulted in rapid inflation in the prices of these basic commodities in the country. There are shortages for basic essentials such as food, medicines and gas as it battles an enormous foreign debt and plunging currency. 70% of Sri Lankans are missing meals every day. More than 5.7 million people, including 2.3 million children, require humanitarian assistance

There are long queues outside fuel stations and lots of people are dying while standing in those queues. Millions of Sri Lankans are forced to use firewood. The newspaper and printing industries are also badly affected because of the shortage in printing materials. There is no paper for exams and the streets have gone dark because there is no electricity. The currency has crashed and the prices for everything are skyrocketing. There have been weeks of protest across the country and things have gotten pretty violent. Government offices were overrun and the Prime minister’s office was set ablaze. The people are enraged and blame the Sri Lankan government for the economic downfall.

What Led to the Economic crisis in Sri Lanka?

According to Finance Minister Ali Sabry, Sri Lanka lost almost 10 lakh taxpayers in the last two years after the Gotabaya Rajapaksa administration announced significant tax cuts in 2019 in an effort to promote growth as the island nation faced an unprecedented economic crisis. President Rajapaksa kept his electoral promises by implementing these tax cuts in November 2019. Value added tax (VAT) was reduced by the Cabinet from 15% to 8% while seven other taxes were also eliminated. Due to the drastic tax cuts, Sri Lanka’s credit rating was downgraded the next year, alienating it from the world’s financial markets. Additional 52 billion rupees will be raised for the exchequer through other measures, such as raising the corporate income tax from 24 to 30 percent beginning in October. After the poorly timed tax cuts were implemented, Sabry told Parliament that Sri Lanka lost roughly 500,000 taxpayers each in 2020 and 2021. “From over 1,550,000 taxpayers at the start of 2020, the number decreased to 1,036,000 in 2020 and to 412,000 in 2021. We have a huge problem here,” Official estimates show a dramatic decline in Sri Lanka’s foreign reserves from a positive level of $8,864 million in June 2019 to $2,361 million in January 2022. The devastating economic crisis in Sri Lanka prompted the country’s cash-strapped administration to unveil a tax reform on Tuesday that would increase corporate and value-added taxes while decreasing relief for individual taxpayers. The COVID-19 outbreak, which devastated the nation’s valuable tourism business and caused a decline in remittances from foreign employees, came months before President Gotabaya Rajapaksa passed tax cuts, which are to blame for the catastrophe. The prime minister’s office stated in its statement that the tax reduction resulted in around 800 billion rupees in annual public income losses.

R. Ramakumar, a professor of economics at the Tata Institute of Social Sciences, wrote in Channel News Asia (CNA) that China’s “debt-trap” policy is solely to blame for Sri Lanka’s catastrophic economic predicament.”Many people think that the main cause of the issue is Sri Lanka’s economic ties to China. Debt-trap diplomacy is the name given to this phenomenon by the United States. The study said that the problem is being attributed to defaults on China’s infrastructure loans to Sri Lanka, particularly the financing of the Hambantota port. The Chinese Exim Bank provided funding for the construction of the Hambantota port. The Chinese Merchant’s Group paid Sri Lanka $1.12 billion to lease the port for 99 years since it was losing money. Due to its acute liquidity situation, Sri Lanka’s foreign reserves are at their lowest point ever—US$500 million. In addition, it is insolvent due to its inability to repay its significant borrowings. China builds up to 70% of the infrastructure projects on the island using opaque commercial borrowings at a higher proportion. Around $3.38 billion of Sri Lanka’s enormous foreign debt, or 10%, is owed to China. This year alone, Sri Lanka must pay back over $7 billion in foreign debts. In response to Sri Lanka’s request for restructuring, China has announced that it will give the island nation a $1 billion loan instead. The money will be used to pay off previous loans from Chinese banks. These loans have a high-interest rate. The interest rate on these loans, which is typically 3.76 percent as opposed to the OECD’s 1.1 percent, has been disputed and is opaque to the general public. There was also an additional US$1.5 billion buyer’s credit offered by China for the acquisition of Chinese materials.

During this downtime, Sri Lanka abandoned a deceived public trial in organic husbandry due to a worsening profitable and philanthropic catastrophe. In his 2019 election crusade, Sri Lankan President Gotabaya Rajapaksa pledged to convert the nation’s growers to organic husbandry over a ten years time period. A statewide prohibition on the importation and use of synthetic fertilizers and pesticides was imposed last April by Rajapaksa’s administration, and the 2 million farmers in the nation were instructed to switch to organic farming. The outgrowth was harsh and quick. In opposition to assertions that organic husbandry can deliver crops with yields on par with conventional husbandry, domestic rice products dropped by 20% in just the first six months. Despite the fact that domestic prices for this element of the public diet have increased by around 50%, Sri Lanka, which has historically been tone-sufficient in rice products, has been impelled to import $450 million worth of rice. The nation’s top import and source of foreign cash, its tea product, was also fully destroyed by the prohibition.

The government only incompletely eased its fertilizer restriction on important import crops including tea, rubber, and coconut by November 2021 as tea product was declining. Also, the government is furnishing $149 million in price subventions to rice growers who suffered losses, in addition to furnishing $200 million in direct compensation to growers. That was not nearly enough to make up for the detriment and suffering the ban caused.  Over two million growers, or about 27% of the working population in the country, were left in need of organic fertilizers.  Crop yields were destroyed by the abrupt policy change.  The country of Sri Lanka had to import rice for the first time in decades. Tea, the nation’s top import, saw an 18 drop in product, which hurt its foreign exchange earnings. In November, the import prohibition on agrochemicals was relaxed in response to planter expostulations. Still, there was no turning back to the former practice of backing chemical fertilizers.

In April 2019, six near-simultaneous explosions rocked hotels and churches during Easter mass. It was one of the deadliest terror attacks in modern history. Batticaloa, Negombo and Colombo are the three cities where the attacks took place on Easter Sunday. The targets were churches and popular hotel restaurants and nearly 300 people were killed out of which 49 were foreign nationals and this horrific incident wrecked tourism in the country.

This geopolitical incident was the last attack that broke Sri Lankan economy’s back. Russia, Ukraine, Poland, and Belarus accounted for about 30% of visitors this year; the war is threatening to stop that flow. According to official data, Sri Lanka made $3.6 billion from tourism in 2019 before the economic distress witnessed in the country resulted in a swift drop, to less than a fifth, just two years later. On 13 July, the Ukrainian President explicitly stated that Russia is accountable for the economic crisis in Sri Lanka, accusing Russia of exacerbating a global food crisis and fueling inflation.

Rajapaksa, the president, after fleeing to Singapore resigned from the designation of President. He appointed Ranil Wickremesinghe, the prime minister, as interim president before resigning. While he works to stabilize the situation, Mr Wickremesinghe proclaimed a state of emergency throughout the nation and enforced a curfew in the western region. However, recently, a large group of demonstrators surrounded his office and demanded his resignation. The resignation of the president raises concerns about a possible power vacuum in Sri Lanka. Addressing the financial crisis requires a functioning government. The nation owes foreign creditors more than $51 billion (£39 billion), including $6.5 billion to China, which has started talking about refinancing its loans. India has contributed at least $1.9 billion, and the World Bank has agreed to give Sri Lanka $600 million of financial aid. A potential loan of $3 billion (£2.5 billion) is being discussed by the International Monetary Fund (IMF). Any rescue may be postponed until a new administration is in place since it would require a stable government that could increase interest rates and taxes to help finance the deal. To help lower the price of gasoline, the nation has urged Russia and Qatar to supply it with oil at affordable costs. Sri Lanka’s crisis is multidimensional and needs multi-pronged solutions.

Sri Lanka has to implement significant economic reforms in order to boost its economy. Four key measures are highlighted in a World Bank report. The actions include raising agricultural production, expanding employment prospects in non-agricultural industries, better putting reforms into practice to encourage safer, more productive labor, and enhancing access to public services and education nationwide. Rolling back the manure regulation that President Rajapaksa implemented and investing in techniques to make artificial fertilizer less prone to environmental damage are two important approaches to alleviate much of the economic stress in the nation. Second, while investing in non-farming occupations, it’s important to consider Sri Lanka’s growing resort and tourism industries. According to the International Trade Association, businesses like Hilton, Shangri-La, and Movenpick have all started additional hotel/resort projects to draw in foreign visitors and generate more revenue for Sri Lanka.

Shivani Madne is a BA.LL.B student at Nagpur's Government Law College || Tabish Romani is a 2nd year B.Tech student at Anjumam college of engineering and technology.