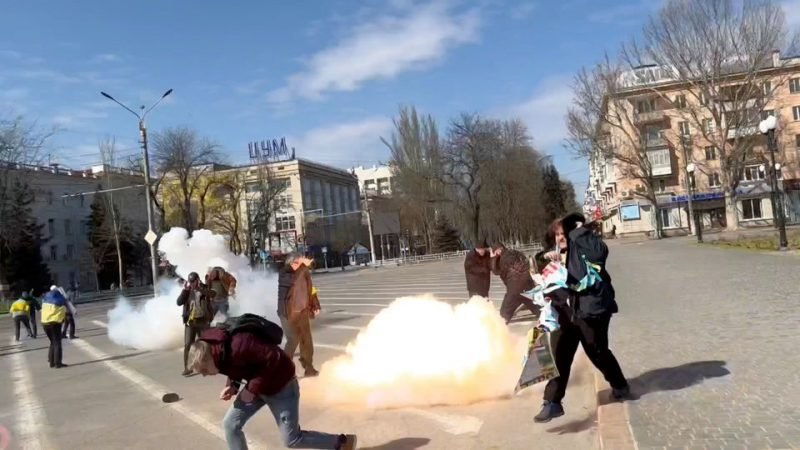 Demonstrators react to stun grenades thrown by Russian troops as they protest the Russian invasion, along Ushakova Avenue in Kherson, Ukraine March 21, 2022 in this still image from video obtained by REUTERS
PDF Button

Russia did not immediately comment on the incident. Moscow denies targeting civilians.

Video footage showed several hundred protesters in Kherson’s Freedom Square running to escape as projectiles land around them. Loud bangs can be heard and there are clouds of whitish smoke. Gunfire can also be heard.

It said at least one person was wounded but that it was unclear how they received their injuries.

Reuters was unable to verify independently what weapons were fired.

The video showed some protesters returning to the square. One man in a black hat strolled back, stopped across the road from Russian troops and stood there on his own, holding a small Ukrainian flag above his head.

The city of Kherson, a regional capital of about 250,000 people, was the first big urban centre to fall into the hands of Russian troops after they invaded Ukraine on Feb. 24.

Since then, groups of residents have staged regular rallies in the centre of Kherson, protesting against the occupation and showing their support for the government in Kyiv by waving Ukrainian flags.

Earlier this month, the Ukrainian authorities said members of Russia’s National Guard had detained more than 400 people in Kherson region for protesting against the occupation. It accused Russia of trying to create a police state there.

Russia calls the war a “special military operation” to disarm Ukraine and protect it from “Nazis”. The West describes this as a false pretext for an unprovoked war of aggression to subdue a country President Vladimir Putin describes as illegitimate.