The Sino-Russian Alliance and What it Means for Europe 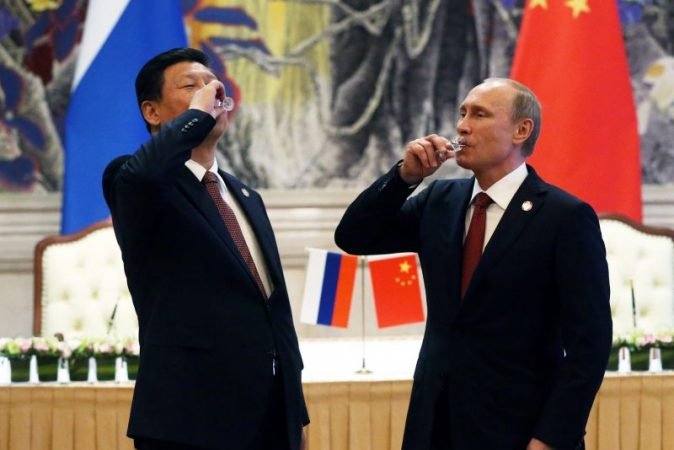 Dating back to the 1800s, it is well established that Russia and China have had a long and complex relationship. Since the 1950s to the demise of the Soviet Union, their relations were characterized by hostility. A series of border clashes in 1969 left many soldiers dead and nearly triggered a Sino-Soviet armed conflict. After the collapse of the Soviet Union, however, Moscow and Beijing have transformed their relationship dramatically. Going from Cold War adversaries to becoming partners, Sino-Russian relations are better today than at any point of their troubled histories. After the Cold War, Russia and China began working on resolving their border dispute and in 2001 they signed the Treaty of Good Neighbourliness and Friendly Cooperation.

As a result of Russia’s military aggression against Ukraine and its annexation of Crimea, EU-Russian relations have deteriorated with the EU imposing sanctions on the Russian Federation. Likewise, Sino-American tensions, as well as a backlash against China in Europe, has led to a further deepening of the Sino-Russian strategic partnership. Between 2013-2019, it was estimated that Russian President Vladimir Putin and Chinese President Xi Jinping met at least 30 times. They meet regularly during state visits and on the side-lines of BRICS, the Shanghai Cooperation Organisation, and other multilateral summits. What’s more, the Chinese President said in an interview “I have had closer interactions with President Putin than with any other foreign colleagues. He is by best and bosom friend. I cherish dearly our deep friendship.” Dmitri Trenin of the Carnegie Moscow Center claims that “Moscow is now closer to Beijing than to Berlin.” This brief uses the term ‘alliance’ as the growing cooperation between Russia and China based on common values.

One of the main foundations of the Sino-Russian alliance is that they both believe that the current global order is controlled by Western countries, mainly the U.S. led, and this is undesirable for them. They, therefore, want to transform the system into one that is multipolar, co-shaped by them. Their goal is to display Western liberal democracies as ineffective and instead align the system with their way of governance – authoritarian leadership, respecting national sovereignty, and limited personal freedoms.

Furthermore, Russia and China often coordinate their positions on global issues and work to challenge Western principles such as the Responsibility to Protect (R2P). They claim that R2P is an unacceptable breach of a state’s sovereignty and attribute it to Western states’ pursuing their self-interest. This cooperation also includes both countries avoiding criticizing one another, with China adopting a neutral stance about Russia’s annexation of Crimea and Russia not taking any sides in the South China Sea territorial dispute.

On a multilateral basis, we have seen the enhanced cooperation between Moscow and Beijing at the United Nations Forum, especially the Security Council where both countries use their veto powers on many occasions against Europe. Likewise, Russia and China have worked together in aligning their interests in the Asia-Pacific Economic Cooperation forum, the G20 group, the BRICs group and the East Asia Summit. Recently, Russia and China have vetoed a United Nations Security Council resolution proposed by Germany and Belgium to extend aid deliveries to Syria to help combat the coronavirus. They argued that this resolution would violate the sovereignty of Syria. Since this resolution is said to be crucial in saving lives, however, a European diplomat called this an “extremely negative development.”

Another important part of the Sino-Russian alliance is their economic convergence. Since the sanctions that the EU imposed on Russia, trade between China and Russia has increased. China has become Russia’s biggest individual trade partner (38%), consumer goods (45%), technologies of dual-use and drilling equipment (45%). Furthermore, Russian and Chinese news agencies have stated that the two countries want to increase trade up to $200 billion by 2024, up from $107 billion in 2018. It is important to note, however, that China has not replaced EU-Russian trade.

The most important aspect of Sino-Russian economic cooperation is the energy sector. In May 2014, Putin attended the summit of the Conference on Interaction and Confidence-Building Measures in Shanghai. During this visit, the Chinese and Russian president signed a $400 billion gas agreement. Furthermore, Russia has become the top oil exporter to China and China has lent tens of billions of dollars to Moscow to secure future oil and gas supplies.

What is even more significant than their economic cooperation, however, is the military entanglement between the two countries. Moscow has sold Beijing advanced weapons such as the S-400 air defence system and the SU-35 fighter aircraft. In 2018, Russian Defence Minister Sergei Shoygu declared that 12% of Russian arms exports were sold to China. He also stated that by the end of 2016, more than 3600 Chinese officers had been trained with the Russian military.

Since 2012, Russia and China have held several joint military exercises throughout Asia and Europe. For example, Russian and Chinese navies have held joint exercises in the Black Sea, the Baltic and the Mediterranean, the Yellow Sea and the South China Sea. One of the most visual signs of Sino-Russian military cooperation was the massive military exercise conducted by Russia with China in 2018. This exercise, named Vostok-2018, lasted for one week and was one of the biggest military deployments of Russian forces. This was perceived as a response to the rise in tension between Russia and the EU. Furthermore, in October 2019, it was revealed that Russian President Putin was assisting Beijing in creating a missile attack early warning system.

In terms of trade, Russia and Europe are economically interdependent with Moscow covering 40% and 30% of the total EU-28’s demand for gas and oil. Furthermore, Russia’s trade with the EU is almost 3 and a half times greater than with China. Even with the growing exports to China, Russia will therefore still need the EU as a market for its oil and gas. Indeed, it seems unlikely that China will replace Europe as an economic partner.

The Sino-Russian alliance could, however, affect Europe’s global agenda, as its political, economic and social interests differ significantly to the Russian and Chinese approach to international relations. Russia and China’s eagerness to support non-democratic regimes is extremely problematic for Europe, as the Syrian civil war has illustrated.

The military cooperation between Russia and China can therefore further cause concern for European governments and risk heightened tensions. As stated by Tobias Ellwood, the UK’s chair of Defence Select Committee in the House of Commons, “you can see this alliance developing, getting stronger and stronger, and like I say, I really worry that there is this split, this schism, between the way that China and Russia will do international business, versus the West.”

The Impact of the Coronavirus Pandemic

In the face of the Coronavirus pandemic, many have questioned the impact this has had on Sino-Russian relations. In the early phase of the outbreak, Russia closed its border with China, becoming one of the first countries in the world to do so. However, both countries have praised one another on their handling of the pandemic, suggesting that their relations are still likely to remain strong. In terms of trade, while EU-Russian trade has decreased since the pandemic, Sino-Russian trade has grown by 3.4 percent.

Moreover, COVID-19 has given both countries an opportunity to present an alternative to the current Western-led order. They have launched disinformation campaigns in Europe that seek to create conspiracies and hoaxes about where the outbreak originated and who is leading the response as well as spreading misleading information. Some of this is aimed at harming the European Union along with its member states. This suggests that the Sino-Russian alliance may, in fact, deepen as a result of the pandemic and that one of the biggest threats presented by the alliance in current times seems to be in the form of a cyber threat.