Rohingyas in the post-COVID world 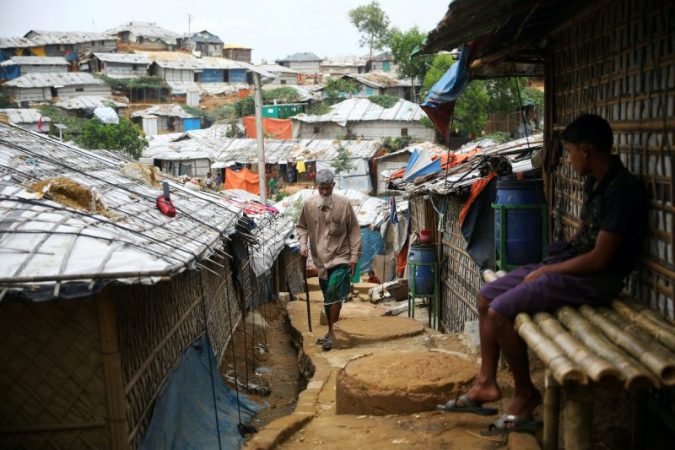 In 2017 millions of Rohingya crossed borders to enter Bangladesh from Myanmar to escape state persecution and arson. Since then the people living in the makeshift camps have faced it all. From the wrath of elements in the form of Cyclones and the cholera outbreak to women and children falling prey to human traffickers in neighbouring countries. The Covid-19 tests UNHRC’s and other grassroots ability to provide for an infrastructure that could help to tide over the pandemic in a region where the population density is the highest in the world and social distancing is impossible. In the background attempts for repatriation continue to take place. However, the prevalence of protectionist, anti-refugee sentiment in the world, it only makes the future of Rohingyas post-COVID more stateless.

Inside the refugee camps – Rohingya vs. the COVID

The first COVID-19 positive case within the Rohingya refugee community was confirmed on 14 May. According to a study published in Medrxiv, the large-scale outbreak is very likely in this setting after a single infectious person enters the camp, with 0.5-91% of the population expected to be infected within the first three months and over 70-98% during the first year depending on the transmission scenario, should no effective interventions be put into place. As of 30 June, WHO reported over 2,623 cases of COVID-19 in Cox’s Bazar, including a number of front-line healthcare staff and humanitarian staff.  And, some 39 refugees are currently undergoing quarantine in facilities run by UNHCR.

As the outbreak coincides with monsoons, it’s a crisis over a crisis for the people in the camps. Hospitalization needs to exceed the existing capacity of 340 beds after 55-136 days of introduction. Kutupalong camp due to its large population size, congestion, topography and unavailability of land, lacks Sanitation management. Catchment reservoirs are required in Teknaf area to overcome the brackish quality of water from the river.

Imams, since the end of March, have helped reach 286,638 individuals multiple times with important information through mosques and their networks in 29 camps. At the suggestion of the Imams, UNHCR has also reached out to women active in religious life to extend direct access to messages to women, as they do not attend mosques. The host community and Rohingya women have helped in producing cloth masks used and distributed by volunteers and elderly persons in the camps. Some 69,000 masks have been made to-date through UNHCR-supported projects.

The cases are increasing rapidly despite the measures taken on the ground to help the patients. Rohingya in the camps are reluctant to come forward for testing and are instead self-medicating with help from makeshift pharmacies inside the camps as they fear being sent away into quarantines.

One needs to keep the global shift to right, renewed energy around repatriation and future challenges in mind while predicting the future of Rohingyas in the times post-COVID 19. Will the world become more accepting of them? Will there be adequate resources and efficient means to share them? Is it possible for Rohingyas to ever go back to Myanmar and live without being discriminated against in a country where they were subjected to a genocide?

Repatriation talks – stuck in the middle

Michelle Bachelet, the UN High Commissioner for Human Rights, was speaking at the 44th Session of the Human Rights Council, said, ” the human rights situation for Rohingyas in Rakhine State has not improved and that conditions for their safe, dignified and sustainable return from Bangladesh are still not in place.” Bachelet requested Myanmar to respect the secretary-general’s call for a global cease-fire, end the intensifying armed conflict in Rakhine State and address root causes that have prevented Rohingya returns since 2017.

Bangladesh, while it has been busy collecting applauses for its generosity and empathy towards Rohingya. Simultaneously, continues to lobby for their repatriation back to Myanmar.

Dr Shamsul Bari, a former Director of UNHCR, in an interview to The Daily Star last year had said that Voluntary repatriation is normally the only viable solution for most refugee situations in the world. Initially, Rohingyas themselves too were ready to head back if there were assured by Myanmar equal citizenship to live with dignity and security. However, the first round of repatriation talks failed as there were no volunteers and they repeatedly demonstrated against the action. Memories of genocide back in Rakhine state made them wary of going back.

The Rohingyas are stuck in the middle

The main reason behind the failure of repatriation in 2018 was mainly because the refugees received no guarantees from the Myanmar authorities on their basic demands. Since then, there has been very little progress in the situation, only empty assurances from time to time.

Back at the campsites, overcrowding is making Bangladeshi government relocate refugees from Cox’ Bazaar to the island of Bhasan Char. It is an isolated floating island of silt. Human Rights Watch demands an immediate removal of refugees from Bhasan Char as it found it to be inhabitable. However, British and Chinese engineers are reportedly helping prepare the island to receive refugees before the onset of monsoon rains, which flood low laying territories regularly. Bangladesh is mysteriously delaying aid’s work on the island. The new refugees are being quarantined at Bhasan Char, to prevent the spread of Coronavirus. The people can only leave if they volunteer to repatriate back to Myanmar or are selected as asylum seekers in a third country.

Protectionism and Exclusionary nationalism – no third way either

Covid-19 has strengthened globally a pre-existing political shift to the Right in Democratic societies. There is a newfound sense of trust in administrative efficacy nominally authoritarian states can offer. Research on the relationship between conflicts and Migrants show that they often become soft target for political leaders to use them as scapegoats. Lack of adequate representation makes them easier to be blamed for any crisis or conflict the host country faces.

The virus has therefore made more authoritarian regimes seem safer because it has made people in both Asia and the West more afraid of migrant populations. Andrew Heywood wrote on the nature of right-wing parties that they create fear-psychosis in the masses of threat to their religion and nation mostly from migrants or minorities to ensure support for themselves. so, it’s not unusual that we see even developed countries like the USA and UK to justify their anti-refugee policies.

In the case of Rohingyas, Myanmar will no longer need to stick to orthodox excuses of Rohingyas not being Burmese and merely colonial-era immigrant. The concern for public health will be the new tool for othering and furthering their agenda of not taking them back in diplomatic forums. Since the community has contracted the disease, they will forever be associated with it to be presented as a threat. In Bangladesh, there have been several hostile clashes between locals and settlers in camps. Rumours turn the local politics against Rohingyas that in turn creates pressure on the national government which definitely reflects in the international arena. This not only jeopardises the future of repatriation talks but also makes the possibility of Rohingyas resettling in a third country, exceedingly unlikely.

The problem faced by Rohingyas or any other refugee community cannot be solved by a single wave of funding or diplomatic talks. It requires greater involvement of development actors, agreement of authorities planning and multi-year funding.

UNHCR’s global additional funding required to support the prevention and response efforts for COVID-19 was revised to US$745 million on May 11. A budget of $320 million is needed for Rohingya, struggling in Bangladesh, is one of the priority countries.  Approximately, $200 million of this funding is required for the agency’s COVID-19 response in Bangladesh and the remaining $120 million is needed to help sustain the mainly-Muslim ethnic Rohingya for the next six months.

The hostilities of locals towards Rohingyas, the prevalence of anti-refugee protectionism and failure of repatriation efforts are challenges that fall in the way of a better future for the refugees from Myanmar and everywhere else. The international community should come together in order to help international organisations to undertake operations that benefit both, the refugees escaping persecutions as well the host countries willing to give them a share of their resources.

For example, as per UNHCR, an upgrade of surface and groundwater resources in Teknaf area would serve both refugees and host communities. Same goes for investing in medical and communication infrastructure. The UN-supported mask production is an example of a collaboration between hosts and refugees as both make and use these masks or their benefit. As per UNHCR data, in May, 3,000 households supported with seeds to enable poor households to boost food production. A plan to make one-off cash payments for 16,000 local households were also made to worth 4,500 BDT, is also underway following the appeal of the District Commissioner of Cox’s Bazar. The database of beneficiaries was prepared with the help of local partners BDRCS, Mukti, BRAC and CNRS.

A solution through repatriation to Myanmar or expecting almost every Rohingya to get asylum in a third country in times when everyone is building walls is neither achievable nor desired. A context-specific approach would require striking a balance between national restoration of their civil and political rights in Myanmar and capacity-building of refugees and host communities to influence their own futures.