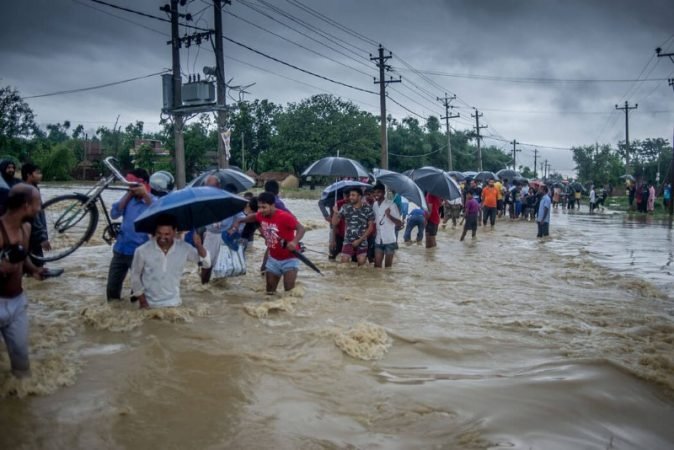 Every year in the time of monsoon, the South Asian states like India, Nepal and Bangladesh are hit by the floods. Last year, according to the report of Red Cross more than 1200 people died and more than 41 million people were affected. This year’s summer monsoon has also started and is already flooding large parts of Assam, Meghalaya, Bihar, northern Bangladesh, Bhutan, Sikkim and Nepal. Now the scale and size of the disaster are staggering and the humanitarian needs are enormous.

According to the daily flood report of the Assam State Disaster Management Authority (ASDMA), so far 92 people have died in the flood-related incidents in the state, 66 people died in floods and 26 people were killed in landslides. These devastating floods in Assam have affected more than 33 lakh people across 28 districts in the State. ASDMA reported that at present, 3,376 villages are underwater and 127,647.25 hectares of crop areas have been damaged across Assam.

The Brahmaputra River is flowing above the danger mark affecting Guwahati, Dhubri, Goalpara cities, besides at Nimatighat in Jorhat and Tezpur in Sonitpur districts. Its tributaries are also flowing above the red marks. The floodwater has submerged and swamped human settlements and agriculture affecting the livelihood and the ecology. The downpour has also affected 3,574,170 domestic animals and poultry across the state during the last 24 hours, as per the official reports. The worst-hit districts in the state are Hojai, Dhemaji, Lakhimpur, Biswanath, Sonitpur, Udalguri, Darrang, Baksa, Nalbari, Barpeta, Chirang, Bongaigaon, Kokrajhar, Dhubri, Goalpara, Kamrup, Nagaon, Golaghat, Jorhat, Majuli, Sivasagar, Dibrugarh, Tinsukia and Karbi Anglong. Various embankments, buildings, roads, bridges, biodiversity parks and several other infrastructures are heavily damaging due to floods and landslides.  Over 80 per cent of the Kaziranga National Park has been inundated and 66 wild animals including two rhinos have died, the forest department officials said.

Every year Assam faces such floods during the monsoon season ruining the life of lakhs of people. This year is hard for Assam as its facing dual wrath of Coronavirus and severe floods and it’s not feasible for local people living there to follow the social distancing norms and guidelines something which is far from their capabilities at the moment. This year the floods are harsher towards the farmers as the water is breaching the embankments endangering the crops and hitting out their livelihoods. Many people have lost their livelihoods and are barely surviving with no food or water to drink. What is more questionable is the fact that this disaster occurs every year and knowing the fact we still don’t have long term measures to tackle it. The vicious cycle of disaster and deaths goes on leading to several deaths each year.

The National Disaster Response Force (NDRF), State Disaster Response Fund (SDRF) and the Local administration teams have rescued 3,991 people in the last 24 hours by deploying 180 boats across the state. Authorities are running 629 relief camps and distribution centres across 23 districts, where 36,320 people have taken shelter currently. They have distributed a total of 13,338.07 quintals of rice, dal and salt, and 30,841.46 litres of mustard oil along with other relief material such as tarpaulin, baby food, candles, matchboxes, mosquito nets, biscuits, soaps, drinking water, cattle feed, masks and wheat bran. Rescue operations are going on with the cooperation from the Local Administration but still, the situation in Assam is not that controlled. Heavy rainfall was reported in the state of Arunachal Pradesh on 10 July, triggering landslides in which 8 people died.

According to India’s Disaster Management Division, over 36,000 people have been affected by monsoon rainfall in the state so far this season, with 657 people displaced. Teams from India’s National Disaster Response Force have been deployed to West Kemang and Lower Dibang Valley districts.

Similarly, Bihar as one of India’s most flood-prone state destroying thousands of human lives apart from assets and livestock worth millions. Meanwhile, in Bihar, flooding has affected the districts of Sitamarhi, Sheohar, Supaul and Kishanganj. According to India’s Disaster Management Division, 81,000 people have been affected and 996 evacuated. As of 13 July, 250 were taking shelter in relief camps. CWC reported rivers in 12 locations in Bihar were at “Severe Flood Stage” as of 13 July. The Koshi River at Baltara in Muzaffarpur district reached 49.47 metres on 13 July, above the danger mark of 48.68 metres. The Bagmati River at Runisaidpur in Sitamarhi stood at 57.2 metres, well above the danger mark of 53.73 metres. Rivers such as the Bagmati, Gandak, Kamla Balan, Koshi and the Mahananda rivers are all above danger levels and pose severe risks to flood-prone areas. Bihar’s water resources department, as a pre-emptive measure, asked the villagers to use twitter to highlight any concerns they have, including reporting cracks in river embankments.

Bihar’s topography is marked by various perennial and non- perennial rivers. When heavy rains occur in the mountains of central and eastern Nepal the water flows into the major drainages of Narayani, Bagmati, and Koshi rivers. As these rivers cross into India they flow into the plains and lowlands of Bihar and break their banks causing floods.

Not only in India, but thousands of people have also been displaced in the Western part of Nepal due to heavy rains, flash floods and landslides. According to a press release by Office of Prime Minister and Council of Ministers Nepal on July 13, 51 people have died, 31 are missing and 10,385 have been displaced after heavy monsoon rainfall which triggered flooding and landslides in Nepal. Conferring to Nepal’s National Disaster Risk Reduction Management Authority (NDRRMA), there were over 100 incidents of major flooding or landslides across the country between 9 and 13 July.

In response to the disaster, the Nepal Government has deployed the Nepal Army and Nepal police for the rescue. Likewise, the government has declared to help the affected people with health, and infrastructural relief immediately, and plan for rehabilitation of the people and reconstruction of the flood-affected areas.

Likewise in Bangladesh, over 1.3 million people have been affected and tens of thousands of people have been displaced by the floods in different parts. According to Bangladesh’s National Disaster Response Coordination Centre (NDRCC) under the Ministry of Disaster Management and Relief reported 1,309,150 people were affected due to floods in 15 districts. And because of the onrush of upstream waters, Bangladesh is to experience the second wave of floods with the rise of water levels in major rivers.

In response to the flood, Bangladesh’s government has also have deployed the Bangladeshi Army and police for the rescue and has transferred of people at risk to the safe place regarding the second wave of flood. Moreover, the country has received funds from international donors for the help of the flood-affected people.

Still, the government lack certain measures ensuring the mitigation of the flood disaster. Due to the pandemic, international organizations haven’t been able to help each state. So, in response to this, for every year routine of disaster, a collaborative approach and cooperation are in need.

The South Asian states share rivers, the river from Nepal flows to India, and rivers from India flow to Bangladesh. They share the devastations every year, but when it comes to water resources, relations have never been easy.

Flooding intensifies tensions between the neighbours, with angry citizens on both sides blaming those across the border for their grief.

In regards to Nepal and India, more than 6,000 rivers and rivulets flow down to northern India from Nepal and contribute around 70% of the flow of the Ganges River during the dry season. The Nepalese residents blame the Indian side for constructing embankments and the cause of floods in Nepal whereas Indian authorities claim it is a road. Also, Bihar is hit the hardest when major rivers such as the Koshi and Gandaki for which Nepal is often blamed for opening floodgates and jeopardizing settlements. But the Indian government is the one that operates the barrages on the rivers even though they are located in Nepal. For this, Nepal and India have signed the Koshi agreement in 1954 to regulate the flow of the river and ensure flood management.

Likewise, Bangladesh complains to India about her territory being flooded during the monsoons because of the release of water by India. Bangladesh has signed two water-sharing treaties with India to manage water between the two states. However, the water sharing between Nepal and India, and India and Bangladesh were signed to regulate the water resources and flood management, the states have not have implemented the regulations properly. The proper implementations of the regulations can help the states to overcome the damage of the problem.

Furthermore, for the cooperation of the states in the flood risk management, SAARC is a suitable platform for this. SAARC Disaster Management Center (SDMC) can develop a regional road map to formulate and implement the action plan for flood risk mitigation. Collaborative approach on the implementation of the structural measures like flood control dams, river improvements, levees, diversions, detention storages and pumping installations should be constructed. Complementarily, structural flood risk mitigation measures with various non-structural measures such as flood zoning and flood risk mapping flood forecasting and warning, flood proofing and resettlement of affected population should be implemented collectively.

Above all, climate change is another important factor to be considered during the flood risk management cooperation. Hence, a Collaborative and Sustainable Flood Management plans and programs should be formulated and implemented for the future by all the states.

Jyoti and Manish are Interns at The Kootneeti