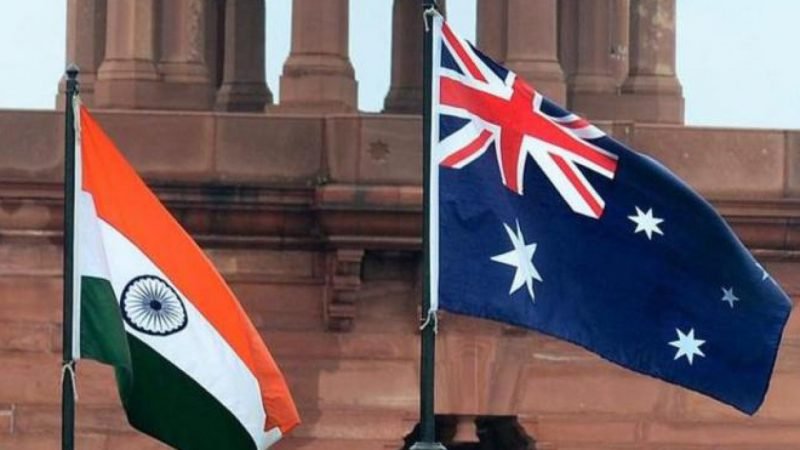 Australia has the most China-dependent economy of all the G20 economies, with China being Australia’s most important trading partner, and source of international students and tourists. China is also an important source of immigrants. The Australian government has long recognised that Australia is highly dependent on one market and that this leaves Australia vulnerable to market volatility, protectionism and also to the weaponisation of trade. The pandemic has shown that dependence on China poses all kinds of risks and for Australia, it’s even greater. In addition to this, recently, there have been trading frictions between the two when Australia pushed for an independent inquiry into the handling of the coronavirus pandemic, which first emerged in the Chinese city of Wuhan in December 2019.

Talking on the efforts being taken by the Australian government to develop markets outside China, Australian Professor John West, author of the book ‘Asian Century… on a knife-edge’, said, “One such effort is The India Economic Strategy, an ambitious plan to transform Australia’s economic partnership with India out to 2035. Getting the Strategy right will strengthen the resilience of the Australian economy and help realise India’s aspirations. Australia’s India Economic Strategy to 2035 aims to lift India into our top three export markets, to make India the third-largest destination in Asia for Australian outward investment, and to bring India into the inner circle of Australia’s strategic partnerships, and with people to people ties as close as any in Asia.”

In this regard, at their Virtual Summit on 4 June 2020, Prime Minister of India, Narendra Modi and the Prime Minister of Australia, Scott Morrison committed to encouraging expanded trade and investment flow to the benefit of both the economies. In view of the remarkable growth in the trading relationship between India and Australia, both sides decided to re-engage on a bilateral Comprehensive Economic Cooperation Agreement.

Further, Australia’s Minister for Industry, Science and Technology, Karen Andrews, recently announced that research collaboration between Australia and India has been given a nearly $20 million boost with funding for new projects to advance pandemic research and reduce plastics waste. $15 million will go to extending the Australia-India Strategic Research Fund (AISRF) for another four years, while an additional $4.5 million will support collaborative work led by CSIRO to reduce plastic wastes.

Minister Andrews had welcomed the commitment following the recent virtual summit between the Prime Ministers of Australia and India.  In particular, she said, “India is a natural strategic partner for Australia, and strengthening that relationship through a shared commitment to science and technology will only serve to benefit both our nations.”

To lessen dependence on China, Professor West informed that another initiative is the Indonesia-Australia Comprehensive Economic Partnership Agreement (IA-CEPA), which was signed on 4 March 2019. Building on the benefits of the ASEAN-Australia-New Zealand Free Trade Agreement, IA-CEPA will provide access to Indonesian markets for Australian exporters. Under this, over 99 per cent of Australian goods exports to Indonesia will enter duty-free.

Discussing other steps taken by the Australian government in this direction, John West said, “The Regional Comprehensive Economic Partnership (RCEP), whose negotiations have included 16 Indo-Pacific countries – Australia, Brunei Darussalam, Cambodia, China, India, Indonesia, Japan, the Republic of Korea, Lao PDR, Malaysia, Myanmar, New Zealand, the Philippines, Singapore, Thailand and Vietnam – is another important initiative which can foster more diversified and open trade and investment.  The Australian government hopes that India will return to these discussions and become a full member of the ultimate partnership.”

India had opted out from RCEP in November last year. The major reason behind India’s decision out was the potential that opening up its market to China would lead to a flood of cheap Chinese goods crowding out Indian-produced products. New Delhi was concerned about what the second wave of opening up would do to the existing deficit—one that developed even without a free trade agreement with China. India’s trade deficit with China accounts for about 50 percent of the country’s total trade deficit. And the gap has grown tremendously since China’s accession to the World Trade Organization in 2001. Apart from this, another reason for India to opt-out was that India and Australia could not agree over certain clauses of RCEP, mainly regarding market access over agriculture and dairy products.

A very recent initiative by the Australian government is the establishment of the National COVID-19 Coordination Commission to anticipate and mitigate the economic and social impacts of the global COVID-19 pandemic. Given the Chinese dominance over the global supply chain of critical medical supplies, one major task of the Commission is working with manufacturers to ensure supply of essential products, such as personal protection equipment (PPE), and solve supply chain issues to keep critical goods flowing to Australian communities.

In this context, the Australian government is strengthening Australia’s sovereign capability to produce essential medical supplies, with support for innovative companies to manufacture the materials needed to make PPE.  This support will help Australia be more self-sufficient in a crisis – as well as create new export opportunities.

“This is about more than just the here and now of the COVID-19 pandemic, this is about working with our local manufacturers to produce the supplies which will make Australia more safe and secure into the future,” Minister Andrews said.  “The COVID-19 pandemic has exposed some gaps in our capability to produce essential medical supplies and this will go a long way to addressing that.” As COVID-19 has made the risks of the world’s dependence on China impossible to ignore, more and more countries are going for domestic production and want to shift their manufacturing base back home.

“The multilateral trading system has also struggled to keep up to date with developments in international trade and the world economy more generally, like services trade, electronic commerce and digital trade.  There is also a perception that the World Trade Organisation (WTO) is ill-equipped to deal with many of the issues relevant to the rise of China like the role of state-owned enterprises, industrial subsidies, and intellectual property protection. But the correct approach is not to undermine the WTO and the multilateral trading system, but to strengthen and reform it. ”, he commented.

Many countries have complained membership in the WTO has given China access to Western markets on favourable terms, but Beijing has not implemented significant measures to protect intellectual property rights, strengthen the rule of law, or level the playing field for foreign companies in its own economy. The bet that China would integrate as a “responsible stakeholder” into the U.S.- led liberal order is widely seen to have failed.

When asked how India and Australia can partner to counter these challenges, he said that there is much that Australia and India could do by working together, notably in the context of the nomination of a new Director-General of the WTO.

Professor West also said, “There is also a grave risk of a rise in protectionism, as economies slow down, and governments come under pressure to protect their industries to save jobs.  Another serious risk is that local manufacturers and producers could use the security of supply of essential products as a pretext to request protection.  Protectionism is not the solution to the world’s current health and economic crisis.  On the contrary, as the experience of the 1930s demonstrated quite clearly, protectionism can only make things worse, in particular through a vicious circle of retaliation between countries.

Australia and India both advocate for a free, open and inclusive Indo-Pacific, with a rules-based order and open market economies, along with the freedom of navigation in high seas and overflight.

“The postwar rules-based order has been the foundation for peace and prosperity for over seventy years and it is critical to maintaining this order, through a free, open and inclusive Indo-Pacific.  It is clearly important to adapt and evolve this system in line with the changing world context.  It is also important to resolve disputes where they exist.  But this should be done through dialogue and diplomacy, not by force. ”, Professor West commented.

India and Australia share the same concern about China’s expansionist behaviour, whether in the South China Sea, the Indian Ocean or along China’s land border.

As Australian Prime Minister Scott Morrison and Indian Prime Minister Narendra Modi agreed during their Virtual Summit on 4 June 2020, “India and Australia will work together bilaterally, regionally and multilaterally, and in multilateral arrangements, to support regional architecture in line with their shared values and interests. India and Australia reiterate their commitment to ASEAN centrality and unity and will strengthen their coordination in regional and multilateral fora, such as the East Asia Summit, the ASEAN Regional Forum, ASEAN Defence Ministers Meeting-Plus, the Indian Ocean Rim Association, the Indian Ocean Naval Symposium, the Indian Ocean Tuna Commission and the International Maritime Organization, to achieve their shared vision for maritime cooperation in the Indo-Pacific region. India and Australia welcome the ASEAN Outlook on the Indo-Pacific.”

The two leaders had announced a Joint Declaration on a Shared Vision for Maritime Cooperation in the Indo- Pacific during the virtual summit.

About the future of the relationship between India and Australia, especially after Covid-19 pandemic, Professor West said, “The Virtual Summit on 4 June 2020 of Prime Minister Modi of India and Prime Minister Morrison of Australia took place in a context of great power rivalry and geopolitical tensions, and highlighted and confirmed the deep and strong partnership between the two countries.  In particular, they affirmed their commitment to strengthening India-Australia ties for the long term, and they committed to elevating the bilateral Strategic Partnership concluded in 2009 to a Comprehensive Strategic Partnership (CSP).”

Both countries had agreed that they share the vision of an open, free, rules-based Indo-Pacific region supported by inclusive global and regional institutions that promote prosperous, stable and sovereign states on the basis of shared interests.

Under the CSP, both countries decided to work together in the areas of mutual cooperation as per the following:

—  Maritime Cooperation for an Open and Inclusive Indo-Pacific.

—  Support in UN and international bodies.

“The future has never been brighter for India-Australia relations.  And we can expect these two proud and friendly nations to play a major role in shaping the Post-COVID-19 world. ”, Professor West concluded.

Kavita and Vausndhra are Interns at The Kootneeti