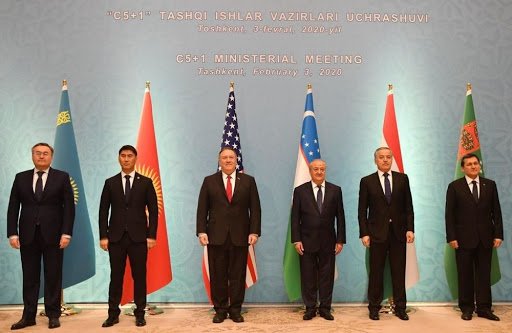 The ministers discussed the challenges their countries are facing in the battle against the virus. The issues arising in strengthening regional economic cooperation were also discussed. They also discussed their efforts to support peace and stability in Afghanistan. All participants expressed their intention to intensify cooperation to jointly resolve regional issues.

The meeting was a follow-on to the C5+1 meeting held in Tashkent in February during the U.S. Secretary Mike Pompeo visit to Kazakhstan and Uzbekistan.

The main agenda of C5+1 High-Level Dialogue was COVID-19 pandemic where the ministers discussed the effects of Covid-19 on the global economy and how Central Asian countries are putting efforts to tackle the deadly virus. The unknown challenges that Covid-19 poses to the economic growth of the Central Asian region were also discussed.

The other main agenda of the High-Level Dialogue was regional peace and security, including peace in Afghanistan. They discussed how the peace deal between the US-Taliban can bring peace to Afghanistan and intra-Afghan negotiations will bring an end to the war in Afghanistan for the benefit of all Afghans and for Afghanistan’s neighbours.

According to Spokesperson for the United States Department of State Morgan Ortagus “The US Secretary of State Mike Pompeo emphasised the U.S. Government’s steadfast support for the independence, sovereignty, and territorial integrity of the five Central Asian states. The Secretary also highlighted U.S. efforts to improve the economic resiliency and connectivity of Central Asian countries and to ensure regional food security in the wake of the COVID-19 pandemic.”

The C5+1 format is a platform for dialogue and cooperation between the five Central Asian nations and the U.S. It is a joint platform to address common challenges faced by the five central Asian countries and the United States.

The first meeting of the format was held in Samarkand in November 2015. Over the past five years, the meetings have become an effective mechanism of multilateral interaction to enhance economic cooperation, environment challenges, security and to promote peace.

It has also served as a forum to attract technologies and expert assistance in developing transit and transport potential while working to preserve the environment and strengthening regional security.

The five  C5+1 projects areas were agreed upon in August 2016, at the second C5+1 ministerial, held in Washington, and have been funded by a $US15 million appropriation from the U.S. Congress:

•The C5+1 Power the Future Project

On Russia-U.S.A-China’s growing interest in Central Asia and on the future of C5 + 1 format, while talking to The Kootneeti a Central Asian Expert said “Central Asia has always been a field of geopolitical games between first Russia and USA, and then China. The US has always had some interests in the Central Asian region but not as profound and deep as in other regions. Afghanistan and military security are one of the key points of US interest in Central Asia and Central Asian countries that are needed for cooperation to achieve those goals in Afghanistan. Other than that, if you look at the updated goals of C5+1 platform, they haven’t changed much and three out of six priorities are connected with Afghanistan. On the other hand, Afghanistan is rarely on the agenda of Central Asian countries governments unless some border issues happen with Tajikistan, Uzbekistan and Turkmenistan. But In the last five years, it is changing, there is more regional cooperation, particularly after the transit of power in Uzbekistan (when first president Islam Karimov died in 2016 and Shavkat Mirziyoyev overtook his role).

She further added “Russia, meanwhile, has always had a more profound, deep-rooted interests in Central Asia through multiple levels of shared Soviet history, military and Russification of Central Asia. It is that the current economic stagnation has led to relatively less influence in economic terms with Central Asia countries and this is the niche that China is slowly taking. The C5+1 forum is probably more a formality rather than a tool that might bring certain tangible results between six countries. This can be view as one of the United States attempt to still try to make the presence in the region despite visible interest from the different US administrations. On the opposite side though, we are seeing more regional cooperation among Central Asian states and, hopefully, this will help to bring more positive changes in the region.”