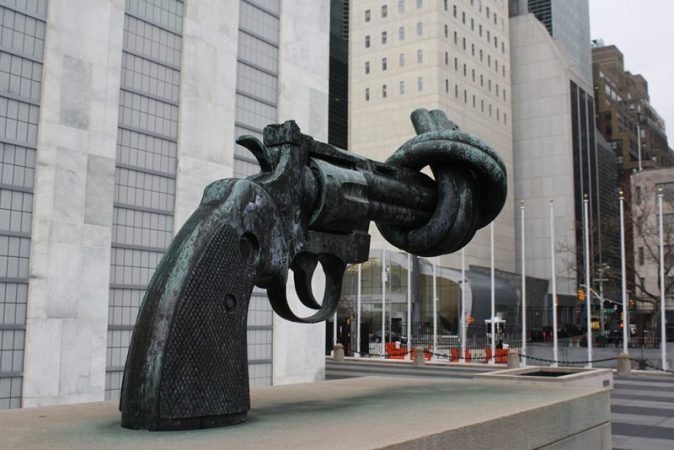 The threat of annihilation has never been greater due to a mix of factors, namely, trade wars, termination of cold war era treaties. The Doomsday Clock for 2021 stood at 100 seconds to midnight closest ever coming ahead of 1953 when the first hydrogen bomb was tested by the U.S. with a combination of factors such as the COVID-19 pandemic, national governments and international organizations being unprepared to manage nuclear weapons and climate change, which currently pose existential threats to humanity, or the other dangers—including more virulent pandemics and next-generation warfare—that could threaten civilization in the near future.

The dismantling of “arms control,” a Cold War mantra, is now heightening the risks of a new era when nuclear powers like India and Pakistan are clashing over Kashmir, and when nuclear Israel feels threatened by Iran and goes to war with Hamas, North Korea is testing new missiles, and other countries like Saudi Arabia are thought to have access to nuclear weapons or to be capable of building them.

There is a lack of will for arms control and disarmament even when the treaties keeping the peace are either being killed or letting them get expired deliberately such as the U.S. pulling out of INF Treaty in August 2019 which banned the use of land-based ballistic missiles, cruise missiles and missile launchers of range 500-5000 km (both short and intermediate-range).

The effort from the Trump administration to renew New START (which Mr. Trump was a critic of) was on life-support and its termination would usher the world into a new arms race. This treaty limited the number of deployed nuclear weapons to 1550 to both countries. Letting this treaty expire would increase the number of nuclear weapons possessed by Moscow and Washington to unknown acting as an invitation to the Chinese to build up their arsenal further. Thankfully, cooler heads prevailed as President Biden and President Putin agreeing on a 5 year extension till 2026 on 26 January, 2021.

There are also fears that the U.S. could withdraw from the Treaty on Open Skies which lets the party states send unarmed UAV surveillance flights into other party states’ airspace which acts as an incredible Confidence-Building Measure (CBM) playing right into the hands of the Russians having done so before with INF Treaty.

The unsettling point for the U.S. in such issues is that nations like India, Pakistan, and particularly China are not a party to such frameworks and the exclusion of tactical nuclear warheads (for battlefield use) from New START. The U.S. stated China not being a party to INF as one of the reasons for its exodus.

Although, American military may have lots of reasons to see China’s growing conventional strength as an offensive threat to U.S. assets and allies one can’t say the same thing about China’s nuclear arsenal.

The Trump idea of a trilateral arms control agreement is not realistic. The Chinese are not going to codify an inferior number of weapons compared to the United States and Russia. And Russia and the U.S. won’t give China equal status. Moreover, missiles banned in INF form 95% of the Chinese inventory of 2000 missiles.

The war-mongering nature showcased by the Islamic Republic of Iran after U.S. pullout from landmark 2015 Iran Nuclear Deal by creating tensions in Strait of Hormuz, launching attacks on Armaco refinery in Saudi Arabia, and attacking U.S. naval, diplomatic, and marine corps assets with drones and missiles brought the world to the brink of another war in the Middle East amidst a highly publicized pullout of U.S. troops from the region opposed by Kurds and Peshmarga who felt betrayed. This all led to the weaponization of cyberspace as the U.S. retailed using cyberattacks on Iran.

This withdrawal has left a void in a region as volatile as the Middle East. The void is being rapidly filled by the Russian, Iranian, Saudi, and Turkish military.

The arms control architecture of the Cold War, involving tens of thousands of nuclear weapons, was laboriously designed over years of hard-fought negotiations between two superpowers — the United States and the Soviet Union. These elaborate treaties helped keep the world from nuclear annihilation.

Today, those treaties are being abandoned by the United States and Russia just as new strategic competitors not covered by the Cold War accords — like China, North Korea, and Iran — are asserting themselves as regional powers and challenging American hegemony.

There is heavy military buildup by China and Russia which they believe keeps them competitive with America making this three-way arms race.

Russia has been waging both direct and indirect war against Ukraine which brought NPT and Budapest Memorandum into question and increased NATO and U.S. boots on the ground and military assets in Eastern Europe especially Poland and the Baltic states

The China-United States trade war an ongoing economic conflict between the world’s two largest national economies, China and the United States. President Donald Trump in 2018 began setting tariffs and other trade barriers on China to force it to make changes to what the U.S. says are “unfair trade practices”. Among those trade practices and their effects are the growing trade deficit, the theft of intellectual property, and the forced transfer of American technology to China. This situation is further worsened by the pandemic which many readily put blame on China.

The Indo-Pak stand-off in February and March 2019 following Pulwama Attacks and Balakot airstrikes brought the world on the brink of a real exchange of nuclear weapons with global repercussions.

With 45 conflicts going around the globe, we ironically enough live-in peaceful times highlighting mankind’s love of wars. With the conclusion of many of these conflicts not in the sights and some heating more and new conflicts emerging, we are set for grueling times ahead.

The situation between nation-states has been further deteriorated by non-state players and rogue states such as Hezbollah, Hamas, ISIS, Taliban, Boko Haram, North Korea, Iran, etc. with many of the ongoing conflicts been the brainchild of these organizations.

But all is not lost and there few instances of the willingness of peace from nations. These include Afghan Peace talks in Qatar between the U.S., Afghanistan, and the Taliban for a peaceful end of the 43-year-old conflict in the region, resulting in US troop withdrawal from the region. First-ever U.S.-North Korea talks in Singapore followed by one in Hanoi and another one at the DMZ making Trump first-ever U.S. President in North Korea. The Panmunjom Declaration tried to mark the end of the Korean War (1950-53) technically still going on by proposing a peace treaty, proposed denuclearization (highly unlikely), and reunification of the peninsula.

The killing of Abu Bakr al-Baghdadi commander of ISIS by the U.S. Delta Force under JSOC on 26 October 2019 was the most landmark event following the killing of the Bin-Laden by Navy SEALs in 2011 in the Global War on Terror.

The entry of the Turkish military forces into Northern Syria is something that can help bring stability to the failed state or could deteriorate the situation further.

The eagerness shown from the Russians and the new US administration to renew the New START which was set to expire in 2021 with no replacement in place has raised hopes that the world would be spared a new arms race and trillions of dollars of money which tin be put to better use.

There has been a sudden and sharp rise in the number of hostilities and possible conflicts with aggressive stances of nations and the emergence of non-state actors with a little desire or no desire for peace from any side. This makes our world one press of a button away from the apocalypse. The rare instances of willingness for peace are not enough to reduce the fears of war.

Diplomatic avenues are not being explored and there has been massive militarization from every side with two states even pursuing a nuclear weapons program (Iran and Saudi Arabia). The situation looks quite bleak.