Rioters rampage in Solomons capital for third day despite peacekeepers 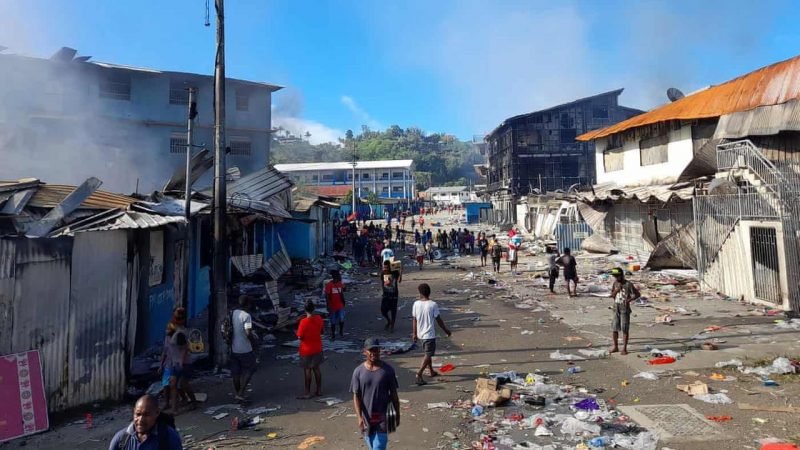 Police fired warning shots and tear gas to disperse rioters attacking the home of the Solomon Islands prime minister on Friday, in a third day of political violence that prompted the snap deployment of international peacekeepers.

As Australian police and soldiers deployed to secure the port, airport and other critical infrastructure, mobs once again torched buildings and looted the smouldering rubble of shops in the usually sleepy seaside capital of Honiara.

Thousands of people — some brandishing axes and knives — rampaged through the city’s Chinatown, Point Cruz and business districts, according to AFP correspondents on the scene.

“We are living in fear,” resident Josephine Teakeni told AFP.

“At the moment it is very hard… children will be missing out from schools, lots of mothers will be jobless.”

The explosion of violence is partly a result of frustrations at Prime Minister Manasseh Sogavare’s government and chronic unemployment made worse by the pandemic.

Also driving the unrest is long-running animosity between residents of the country’s most populous island Malaita and the central government based on Guadalcanal.

Crowds voiced their anger on Friday by setting fire to at least one building near Sogavare’s home, before police fired warning shots to drive the mob back toward the centre of Honiara, AFP reporters witnessed.

In Chinatown, a large warehouse was set alight, causing an explosion that sent scores of people fleeing from the scene in panic.

A tobacco warehouse was also set alight as smoke from previous days fires cast parts of the devastated city of 80,000 people in an acrid haze.

The overrun Royal Solomon Islands Police Force said Friday they had made just two arrests, despite two police stations being among the many buildings burned.

In a letter obtained by AFP, Sogavare told his Papua New Guinea counterpart James Marape that “certain elements” had “attempted to overthrow a democratically elected government” and called for a peacekeepers to be sent for a “period of three to four weeks.”

In an address to the nation Thursday Sogavare told citizens the Solomons had been “brought to its knees” by the rioting, but vowed to resist calls for his resignation.

The pro-Beijing leader claimed foreign powers opposed to his 2019 decision to switch the Solomons’ diplomatic allegiance from Taiwan to China were behind the disturbances.

“Unfortunately it is influenced and encouraged by other powers… I don’t want to name names, we’ll leave it there, we know who they are,” he told Australia’s public broadcaster, without naming the powers or providing evidence.

The unrest began Wednesday when thousands of protesters besieged parliament, setting fire to an outbuilding and seeking to oust Sogavare.

It then descended into a violent free-for-all, as mobs of stick-wielding youths ignored a curfew and rampaged through the capital, stripping stores of goods and clashing with police.

By late Thursday thousands of looters openly defied police lockdown orders, running through the streets carrying boxes, crates and bulging sacks of goods as flames crackled around them and plumes of thick black smoke billowed high above the city.

The archipelago nation of around 700,000 people has for decades endured ethnic and political tensions.

In the late 1990s Guadalcanal militants launched attacks on settlers, particularly targeting those from Malaita, and for five years unrest plagued the country.

The so-called “Tensions” only eased with the deployment of an Australian-led peacekeeping missions that ran from 2003 to 2017.

The Australian government said its latest deployment was only expected to last “a matter of weeks”.

Malaita residents have long complained that their island is neglected by the central government, and divisions intensified when Sogavare recognised Beijing.

Malaita authorities opposed the move and maintained contact with the Taiwan authorities. The province continues to receive outsized aid from Taipei and Washington.

The province’s premier, Daniel Suidani, has accused Sogavare of being in Beijing’s pocket, alleging he had “elevated the interest of foreigners above those of Solomon Islanders”.

“People are not blind to this and do not want to be cheated anymore,” he said.

Experts say geopolitical rivalry did not trigger the crisis directly, but it contributed.

“The actions of these great powers — while they curry favour with individual political actors — have a destabilising effect on what is already a fragile and vulnerable country,” Mihai Sora, an expert on the Pacific at Australia’s Lowy Institute, told AFP.

“Then of course the contemporary context is one of extended economic hardship due to Covid restrictions, a Covid state of emergency.”