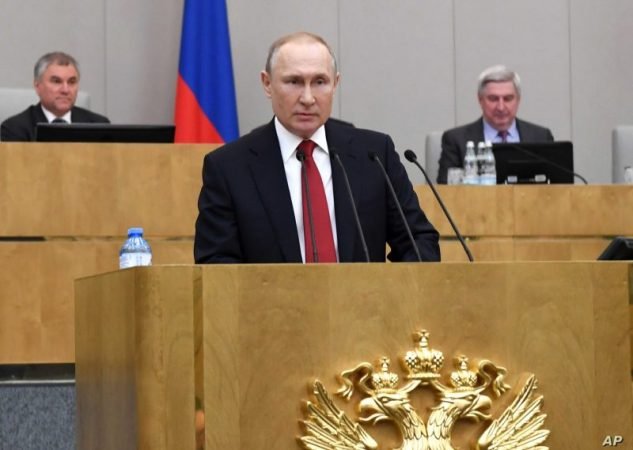 For Russia’s President Vladimir Putin a national referendum on constitutional changes had significant importance, as it will allow him to stay in power until 2036. For ordinary Russians, the amended constitution will unlikely to bring any crucial changes in their everyday lives.

Although Putin claims that constitutional reforms will ensure “stability, security and prosperity” – which have been the main mantras the Kremlin propagandists have been repeating over the past two decades – changing certain articles in Russian constitution does not mean the country will automatically resolve its major problems. Even though the amended basic law would formally pressure the authorities to protect Russian territorial integrity, it is not very probable that the Kremlin will stop negotiating the status of the Kuril Island – which have been an integral part of Russia for ever since the end of the World War II – with Japanese leaders. Also, regardless of the Russian constitution, the West will keep insisting on the return of Crimea – which has been incorporated into the Russian Federation in 2014 – to Ukraine.

In the case of Crimea, the authorities recently conducted a poll where the vast majority (93 percent) of the citizens of the disputed territory reportedly stated that the question of territorial integrity is the most import segment of the new constitution. According to the same poll, for 87 percent of Crimeans, the amended basic law is important as it will provide Russia with the status of a “victorious power” in World War II. On the other hand, critics claim that the only goal of the referendum is to “reset” Putin’s previous presidential terms, which means that, once the constitution is amended, he could theoretically rule Russia for 16 more years. It is worth noting that in March 2018 Putin said that “for now” he is not planning any constitutional reforms, but this year Russian Duma (Parliament) passed a bill that would allow the 67-year-old to run for presidency two more times after 2024. That way he would be in power for 37 years total, which is longer than any Soviet leader ever ruled.

Putin’s charade related to constitutional reform suggests that Russia’s political system might get closer to a certain form of authoritarianism, which is not surprising since Russia does not have a history of democratic governance. Traditionally, the country has been ruled by tsars – monarchs – and boyars – members of the highest rank of the feudal aristocracies. Modern-day boyars are not government ministers, but powerful oligarchs, members of security apparatus, and other influential groups often linked with foreign powers. Even though the amended constitution will prevent Russian officials from having dual citizenships, it will not have any impact on Russian oligarchs. Many of them either have dual citizenships, or a residence permit in other countries and after the constitution is amended, their status will remain unchanged, especially due to the fact that the new basic law will keep the old economic model. In other words, the constitution will guarantee that the minimum wage does not fall under the cost of living, but the very core of the economy – oligarchic capitalism – will remain intact. That is one of the reasons why Russian major “system opposition”, the Communist Party, urged its supporters to vote against the constitutional changes.

Russian nationalists, on the other hand, accuse Putin of preserving the status quo by failing to include ethnic Russians in the new constitution. It is worth mentioning that the largest ethnic group in Russia was not mentioned in the old constitution either. According to constitutional changes, the Russian language will be given the status of “the language of the state-constitutive people”, but it remains unclear who that people is, as ethnic Russians were not explicitly mentioned. In spite of that, pro-Kremlin analysts claim that the new basic law, unlike the old one that was adopted in 1993, has an ideological form. Apparently, it will preserve traditional values by declaring that marriage is an alliance only between a man and a woman, as well as including God in the constitution.

Russian officials also claim that constitutional changes are important as the new constitution will take precedence over international law. In reality, regardless of such an article in Russia’s basic law, the West will likely keep pressuring the Kremlin to follow international law, especially when it comes to the status of Crimea. If Putin makes any concessions over that matter, which is at this point very unlikely, it will violate its own constitution. In any case, since the coronavirus crises is expected to bring enormous global changes, and low oil prices will eventually have a negative impact on the Russian economy, the geographically largest country in the world can face political turmoil in the foreseeable future. There is very little the new constitution can do about it, except the clause that gives the president more power over the security forces.

Nikola Mikovic is a Serbian freelance journalist and geopolitical analyst who covers mostly the foreign policies of Russia, Belarus and Ukraine. He's on Twitter @nikola_mikovic