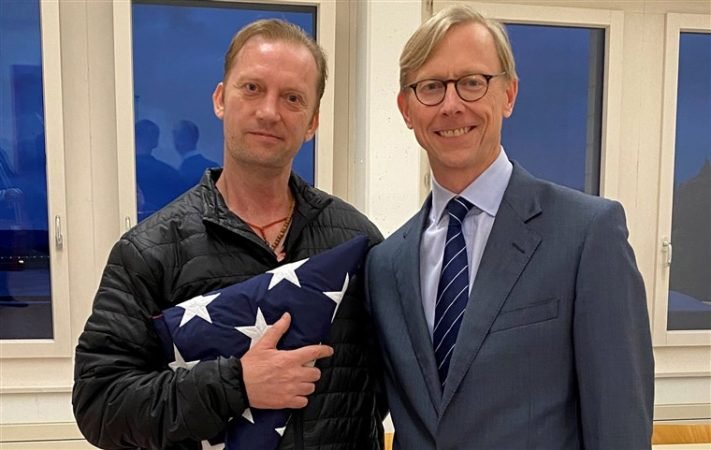 Michael White, a freed US Navy veteran detained in Iran since 2018, poses with US Special Envoy for Iran Brian Hook at Zurich Airport on Thursday/ Image source: Reuters
PDF Button

On 4th June 2020, Iran released US Navy Veteran Micheal R. who was detained in 2018 in prisoner swap deal where US released Matteo Taerri, also known as Majid Taheri, an Iranian American doctor who had violated US Sanctions.

Interestingly, this first appeared on Iranian Foreign Minister Javad Zarif’s twitter account, as a unique display of hostage-bartering on the platform.

Of course, the last line was an attempt at an inverted blame game, a classic tactic so standard of Iranian diplomacy.

Over the decades, the Iranian regime has had an almost exquisite interest in leveraging hostages for its foreign policy goals. The practice has proven to be a route to advancement for ambitious officials. Among those who oversaw the US embassy siege was a future president of the Islamic Republic, Mahmoud Ahmadinejad.

This news came after the US deported Sirous Asgari, a materials science professor from Tehran, with trying to trade secret research from an American university.

In 2018, Michael R. White American US Navy veteran from San Diego, California visited his girlfriend in Mashhad, Iran whom he met on the Internet. Where he was arrested by Iran’s paramilitary force Islamic Revolutionary Guards Corps when he was preparing to fly to Turkey to marry his girlfriend.

The news of his detention was first released by IranWire a London-based website in January 2019. When Irvar Farhadi a former detainee in Iran spoke to IranWire about his time in prison, how he was tortured, how prisoners were made to live in horrible conditions and his encounters with his fellow inmates. Farhadi was arrested by Intelligence agents of Iran on October 1, 2018, accusing him of insulting the Islamic Republic and its policies.

While talking about the prison he told the website there were few foreign prisoners also and talked about how he met White while playing volleyball when they both were at Mashhad’s Central Prison, also known as Vakilabad.

“White is a former US Navy officer from San Diego, California and has been incarcerated since summer 2018. There are no charges been brought against the American. White told me that he had come to know an Iranian girl online and had travelled to Iran three times to see her. But the third time, when White and his girlfriend were about to fly to Turkey, he was arrested at Hasheminejad Airport in Mashhad. He has been in prison since late summer 2018. Farhadi told IranWire.” This news was later confirmed by The New York Times on 7th January 2019.

Later on 9th January 2019 Bahram Ghasemi, spokesperson of Iran’s Foreign Ministry told news agencies “Michael White, a 46-year-old US Navy veteran, was arrested “some time ago” in Iran’s second-largest city but the accusations that he had been badly treated are not true.” He further added, “United States government, through the Swiss embassy in Tehran, was informed of the arrest during the early days of the incident.”

In March 2019, White was sentenced for at least 13 years with charges that he insulted Iran’s Supreme Leader, Ayatollah Ali Khamenei, and posted anti-regime remarks on social media and did the violation of privacy by posting of a photo of himself with a woman on social media while in the country. Washington termed the charges as not justified.

After the coronavirus widespread in Iran and the US, the two countries decided to release the prisoners. White and Taheri were also released on the humanitarian ground because both of them were tested positive of COVID- 19. White was placed on medical furlough because of his health issues. He flew out on a Swiss army jet to Zurich, where he was welcomed by a senior US official. US and Swiss diplomats worked together towards his release. Swiss government acts on behalf of the United States in Iran since the two nations severed diplomatic relations since 1980.

“Thank you to Iran, it shows a deal is possible.” President Donald Trump wrote on his Twitter.

Targeting of dual citizens and Foreigners

Iran’s security forces behaviour towards dual citizens and foreigners who have a link with western cultural institutions and economic is not appreciated anywhere in the world.

According to the report of Human Rights Watch, they have documented and reviewed the cases of 14 dual or foreign nationals whom Iran’s Islamic Revolutionary Guard Corps’ (IRGC) Intelligence Organization has arrested since 2014.

Sarah Leah Whitson, Middle East Director at Human Rights Watch commented: “At a time when Iran was getting ready to open its door to international trade and cultural exchanges, security authorities were apparently throwing in prison some of the people best suited to rebuild relationships with the international community.” She further added, “This targeted campaign against foreign and dual nationals sends a threatening message to Iranian expatriates and foreigners interested in working in Iran, that their knowledge and expertise are a liability if they visit the country.” Teheran needs to see in this matter because this can affect its relations with many countries.

The prisoner issue has long added to the tension between Teheran and Washington. The relations of both the countries hit rock- bottom when military commander Qasem Soleimani was killed by an airstrike at Baghdad airport on January, 29 on order by US President Donald Trump and when on May 2018 US government announced that they are withdrawing from the Iran nuclear agreement. The prisoner swap deal between Teheran and Washington can be seen as an example of rare co-operation between the two countries.

Meanwhile, Iranian Foreign Minister, Javad Zarif, taking this to twitter wrote: “We achieved humanitarian swap *despite* your subordinates’ efforts, @realDonaldTrump And we had a deal when you entered office. Iran & other JCPOA participants never left the table. Your advisors—most fired by now—made a dumb bet. Up to you to decide *when* you want to fix it.”