Myanmar’s lean towards China – A bad signal for India? 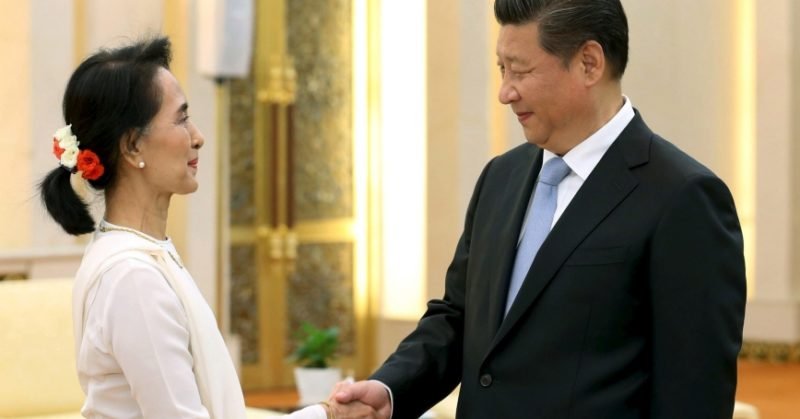 As the world is moving faster, it is witnessing new problems as well. From the Iran – U.S. conflict to the rise of trade wars, India has been also involving itself in these issues with a greater motivation of becoming a significant Asian power. But this has led to some other important crisis. India’s neighbourhood is not feeling much comfortable as it was a couple of years ago.

It was after 19 years of long gap when any Chinese head of state visited Myanmar. Xi Jinping’s this visit (17 -18 January) to Myanmar should be a concern for India, not because of the older fear but due to other major transformations. China – Myanmar Economic Corridor (CMEC) is ready to create new troubles for India. This is a part of China’s mega Belt and Road Initiative (BRI), an ambitious initiative meant to build a trade corridor linking Asia, Africa and Europe.

CMEC also allows China’s access to the Indian Ocean and as it will help in shortening the route for its oil and gas imports from the Persian Gulf. It also connects China’s relatively less developed southern regions to the world market. Xi Jinping stated in his speech that the “Friendship between the two countries can last thousands of years” as they have “stood together through thick and thin, and adhered to mutual respect and mutual benefit.”

China is doing this all having a full-proof strategy of isolating India from its neighbourhood. China is developing the ‘Kyauk Phyu Special Economic Zone’ and ‘Myanmar-China Border Economic Cooperation Zones’ to have economic ties with Myanmar so that it becomes the obligation for it to support China. But Myanmar should also have some learning from past as $3.6-billion proposed ‘Myitsone Dam Project’ which got suspended nearly 10 years ago due to strong local opposition and doubts over Chinese infrastructure policy has led Myanmar to deep troubles.

For India, Myanmar remains central to develop a trilateral highway connecting New Delhi with Bangkok, the ‘Kaladan Multimodal Transit Transport Project’ which is connecting eastern India with Myanmar, and the east-west corridor connecting the northeast region with Southeast Asia. The heavy investment could be at stake if China will get entry into this arena. China’s large-scale infrastructure projects in South Asia increases its presence in the Indian Ocean region as well.

Myanmar, Pakistan and China are partners in BRI. Both CMEC and CPEC are part of BRI projects, aiming to give warm water access to China by which China could avoid the Malacca Dilemma. Heavy maritime traffic will inevitably call for a much bigger Chinese naval presence in the Indian Ocean. Deep seaports in the Bay of Bengal and the Arabian Sea would be utilized for smooth flow of oil and trade commodities. Both could provide an opportunity to be used as military bases capable of positioning PLA naval assets.

It would be too early to say that by this economic and militarily ascendant China will bifurcate India’s position in the Indian Ocean region but somehow it will a tough challenge to limit the Chinese propaganda. On the other hand, side as India has decided to keep itself away from Regional Comprehensive Economic Partnership (RCEP), though it may be favouring some of India’s economic interests, somehow it was making India’s relationship closer to Association of Southeast Asian Nations (ASEAN) and nations like Japan and Australia. India’s Bay of Bengal Initiative for Multi-Sectoral Technical and Economic Cooperation (BIMSTEC) agenda is also lacking the spirit.

Download: Special Report by The Kootneeti – Dragon at The Doorstep

India has also lost the plot on regional connectivity, South Asian Association for Regional Cooperation (SAARC) has also been in offline mode from many years. There is a need to get it revived as it will help India to take up the issues which are important for personal bonding with the neighbourhood. Nepal is still having certain issues after India’s new map came to light. The issue of Kalapani is working like a bitter cucumber in the salad. Bangladesh Foreign Minister Mr A K Abdul Momen also refused to attend Raisina Dialogue held in New Delhi over the differences on the issue of Citizenship Amendment Act (CAA).

The neighbourhood is leaning towards China’s Border Road Project and that is giving it more strength, which India would never wish to get happen. It is said that one can choose the enemies but the neighbourhood cannot be chosen as it’s a compulsion only. Having images of major Asian power, it becomes the responsibility of India to maintain a balance of power in the region. India can keep aside Pakistan for a while but other neighbours are very much important. The issues must be resolved so that strategic relationships can be maintained.