Bolder Presence of OIC in the International Arena 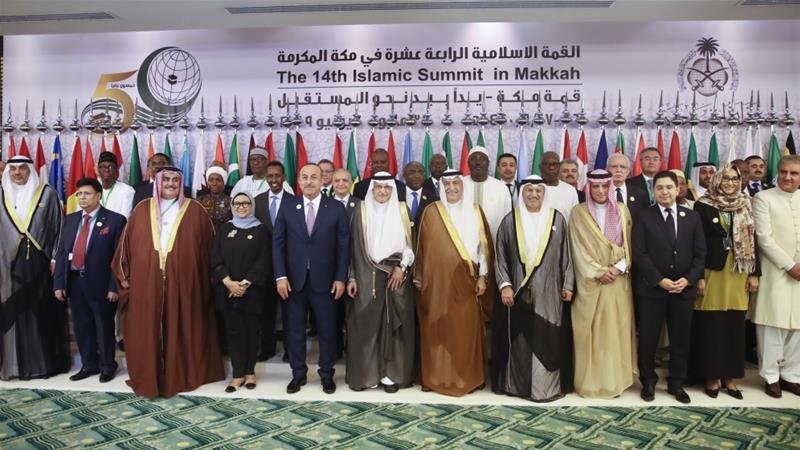 For over half a century, the Organization of Islamic Cooperation (OIC) serves as a focal point for its member states (MS) and as a clearinghouse between its members and the rest of the world. The OIC does that by providing a standing forum and diplomatic tools to solve disputes, and to address challenges in accordance with its charter.

Being the second-largest intergovernmental multilateral system after the United Nations (UN), whose members largely occupy the most fascinating part of the globe (that of its geographic and spiritual centre, as well as the sways of rich energy deposits), gives to the Organisation a special exposure and hence a distinctive role.

The OIC Charter clearly states that it is important to safeguard and protect the common interests and support the legitimate causes of its MS, to coordinate and unify the efforts of its members in view of the challenges faced by the Muslim world in particular and the international community in general. For that matter, the Organisation should consider expanding its activities further. One of the most effective ways to do so is by setting yet another permanent presence in Europe. This time it would be by opening its office in Vienna Austria, which should be coupled with a request for an observer status with a Vienna-based Organisation for Security and Cooperation in Europe (OSCE) – as prof. Anis H. Bajrektarevic tirelessly advocates in his statements.

The OSCE itself is an indispensably unique security mechanism (globally the second largest after the UN), whose instruments and methodology could be twinned or copied for the OIC. Besides, numerous MS of the OSCE are members of the OIC at the same time. Finally, through its Mediterranean partnership dimension, this is a rare international body that has (some) Arab states and Israel around the same table.

Why does the OIC need a permanent presence in Vienna? The answer is within its charter: To ensure active participation of the Organization’s MS in the global political, and socio-economic decision-making processes, all to secure their common interests.

Why Vienna in particular, when the OIC has its office in Brussels (Belgium) and Geneva (Switzerland)?

When it comes to this city, we can list the fundamental importance of Vienna in Europe and the EU, and globally since it homes one of the three principal seats of the OUN (besides Geneva and New York).

Moreover, numerous significant Agencies are headquartered in Vienna (such as the Atomic Energy Agency, UN Industrial Development Organisation, Nuclear Test Ban Treaty organisation, etc.), next to the segments of the UN Secretariat (such as Outer Space, Trade Law, the ODC office related to the issues of Drugs-Crimes-Terrorism, etc.).

Surely, there are many important capitals around our global village, but after New York, Geneva and Brussels, Vienna has probably the highest representation of foreign diplomats on earth. Many states have even three ambassadors accredited in Vienna (bilateral, for the UN and for the OSCE.)

The OIC has nine of its MS who are the OPEC members as well. Four of those are the OPEC’s founding members. Vienna hosts OPEC as well as its developmental branch, the OPEC Fund for International Development (OFID).

Some of the OIC MS have lasting security vulnerabilities, a fact that hampers their development and prosperity. The OIC places these considerations into its core activities through co-operation in combating terrorism in all its forms and manifestations, organised crime, illicit drugs trafficking, corruption, money laundering and human trafficking. Both the UN Office on Drugs and Crime (UN ODC) and the OSCE have many complementarities in their mandates and instruments in this respect.

As an Islamic organization that works to protect and defend the true image of Islam, to combat defamation of Islam and encourage dialogue among civilisations and religions, the effective tool for that is again Austria. It is the very first European Christian country to recognise Islam as one of its state religions – due to its mandate over (predominately Muslim) Bosnia, 100 years ago.

Back to its roots

The Organization was formed by a decision of the Historical Summit in Rabat, the Kingdom of Morocco on 25 September 1969, after the criminal arson of Al-Aqsa Mosque in occupied Jerusalem.

Today, after fifty years of this ferocious incident, the OIC still firmly holds as one of the core issues its resolute support to the struggle of Palestinians, yet under foreign occupation. It empowers them to attain their inalienable rights, including that of self-determination, to establish their sovereign state with Al-Quds Al-Sharif as its capital while safeguarding its historic and Islamic character, and the holy places therein.

When we look back to Austria, it was Chancellor Bruno Kreisky (himself Jewish) who was the very first western leader to receive that-time contemporary Yasser Arafat, as a Head of State, and to repeatedly condemn many of the Israeli methods and behaviours. As prof. Anis H. Bajrektarevic wonderfully reminded us during his recent lecture with Amb. Goutali of the OIC and Excellency Elwaer of the IsDB President’s Office; ‘Past the Oil embargo, when the OPEC – in an unprecedented diplomatic move – was suspended of its host agreement in Switzerland and requested to leave, it was none but that same Chancellor, Kreisky who generously invited the OPEC to find Austria as its new home.’

The OIC is also heavily involved in environmental issues, such as water implementation. According to the Stockholm International Water Institute, around two-thirds of the world’s transboundary rivers do not have a cooperative management framework. The OIC Science-Technology-Innovation (STI) Agenda 2026 has also called on the MS to first define water resource quality and demand by planning national water budgets at the ‘ local ‘ level where appropriate.  In this regard, certain MS lacks the ability to conduct a thorough exercise. An organized and focused action plan to adopt the OIC Water Vision is introduced to help Member States address water-related issues.

As for the implementation plan for OIC Water Vision, Vienna is focal again. This city is a principal seat of the Danube river organisation – an international entity with the most elaborated riverine regime on the planet. This fact is detrimental for the Muslim world as an effectively water-managing mechanism and instrumentation to learn from and to do twinning with.

So far, the OIC covers Vienna (but only its UN segment) non-residentially, from Geneva – respective officers are residentially accredited only to the UNoG. Permanent presence, even a small one – eventually co-shared with the developmental arm of the OIC – that of the IsDB, would be a huge asset for the Organization. That would enable both the OIC and the Bank to regularly participate in the various formal and informal multilateral formats, happening daily in Vienna.

Absence is the most expensive

International security is a constant global challenge that is addressed the best way through collective participation in multilateral settings. It is simply the most effective, cheapest, fastest – therefore, the most promising strategy to sustainability and stability of humankind.

The OIC fundamental purpose is to contribute to the maintenance of international peace and security, as embedded in its and the UN Charter and other acts of the international (human rights and humanitarian) law.

In this light, requesting the Observer status with the largest Security mechanism on the planet (outside the OUN system), that of the OSCE, which has rather specific mandates; well-elaborated politico-military, early prevention and confidence-building mechanisms; net of legally binding instruments; extensive field presence (incl. several OIC members), and a from- Vancouver-to-Vladivostok outreach is simply the most natural thing to do.  This would be very beneficial to the OIC MS, as well as one of the possible ways to improve its own instruments and their monitoring of compliance and resolution machinery.

That move can be easily combined with the bolder presence before the Vienna-based Atomic Energy Agency (IAEA) in advocating a just and sustained settlement for the Middle East – which is a nuclear-free MENA.

Among the 57 OIC MS, 21 of them are listed within a top 50 countries in the Global Terrorism Index for 2019. (With a ranking of 9.6 points, Afghanistan is infamous nr. 1 on the global terror index, making it the nation most affected by terrorism on Earth. The OIC member – Afghanistan, scored the most terror attacks in 2018 – 1,294; and the most terror-related deaths in 2018, with 9,961 casualties. Several other MS follow the same pattern.)

The OIC Charter (article 28, Chapter XV) clearly states that the Organisation may cooperate with other international and regional FORAs with the objective of preserving international peace and security and settling disputes through pacific means.

As said, Vienna is a principal seat of the second-largest security multilateral mechanism on earth, OSCE. This is a unique three-dimensional organisation with its well elaborated and functioning: politico-military, economy-environment; and the human dimension – all extensively developed both institutionally and by its instruments.

No doubt, the OIC so far successfully contributes to international peace and security, by boosting understanding and dialogue among civilizations, cultures and religions, and by promoting and encouraging friendly relations and good neighbourliness, mutual respect and cooperation. But to remain to the contemporary challenges, it necessities more forums to voice its positions and interests. Many of the OSCE Member states have even three different ambassadors and three separate missions in Vienna. Presence of other relevant international organisations follows the same pattern.

The strategic importance of the MENA (Middle East- North Africa) lies on its diverse resources, such as energy, trade routes, demography, geography, faith and culture. The OSCE has a Mediterranean partnership outreach, meaning some of the LAS and OIC members states are already participants, whereas the Central Asian states, the Caucasus as well as Turkey, Albania and Bosnia are fully-fledged member states of the OSCE.

Taking all the above into account, the OIC should not miss an opportunity to open another powerful channel of its presence and influence on the challenging and brewing international scene. It would be a permanent office to cover all diplomatic activities and within it –the observer status before the OSCE (perhaps the IAEA, too). This would be to the mutual benefit of all; Europe and the Muslim world, international peace and prosperity, rapprochement and understanding, present generations and our common futures.

Emmy Latifah is a professor of international law, arbitration specialist, and is an international relations coordinator of the UNS University of Indonesia. || Sara Al-Dhahri is an Intl Relations scholar of the Jeddah-based Dar Al-Hekma University and the Project Coordinator for the Sawt Al-Hikma (Voice of Wisdom) Centre to the OIC.