India shuts the door for RCEP: The Aftereffects 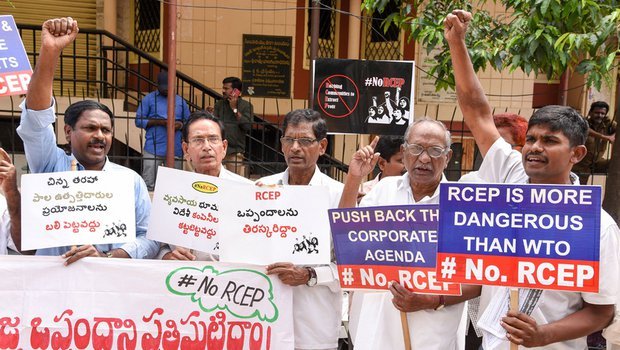 India’s much-anticipated decision of not joining the Regional Comprehensive Economic Partnership (RCEP) has clearly shown one thing that it has tried to keep the domestic market more secure. RCEP which is a 16 mega-regional Free Trade Agreement (FTA) between the 10 ASEAN nations and 6 other countries including Australia, Japan, South Korea, China, New Zealand and India. India has decided to withdraw itself so the number reduces to 15 countries.

The decision came at the time of the third RCEP summit in Bangkok which was joined by Indian Prime Minister Modi. There was a major protest that was going into the country which was forcing India not to join the RCEP, whereas at one point of time Union Commerce and Industry Ministry was in favour of joining it.

Australia has already tried to put up a dispute against India in WTO against the subsidies granted to sugarcane producers and sugar factories. Major leading dairy products, producing countries like New Zealand and Australia have tried to take the full advantage of India joining RCEP as their milk surplus is highest among the other countries. The big dairy giants are ready to take full advantage and targeting domestic production. RCEP becomes a closed club of manufacturing powers that turn mercantilist when it comes to trade in services in India has a higher stake.

At this point of time joining the RCEP would disastrous for India as the economy is struggling and the country cannot risk to imbalance the domestic stability. India’s concerns were mainly focused on rule of origin as China can translocate it’s products to India through other countries despite the country-specific tariffs imposed and India would be in a huge loss. India has a major trade deficit of $105 billion with the RCEP members with the highest being China.

It is true that the Indian economy is not growing at a very higher pace which it should be so that it could tackle the new challenges. India desperately needs an export-oriented growth model and regional integration strategy which could be provided by RCEP as India has not joined the Chiang Mai initiative and Trans-Pacific Partnership (TPP). India’s dream of becoming a 5 trillion economy would not be possible by restraining away from these big economic groups, at some point in time we need to take bold decisions for our economy.

China may show some signs of elasticity that it may go with some demands of India if India joins RCEP as there is a huge benefit which it wants to take as China has said that it will follow the principle of mutual understanding and accommodation to resolve India’s issues with regards to the RCEP trade deal. There is nothing wrong in being a challenger. Here the law survival of fittest applies. We need to change ourselves. We need to make sure that India becomes capable to give a challenge to other export-oriented economies. We need to break the barriers.

This could be only possible by boosting the manufacturing sector, agriculture sector and various other. Infrastructure should be built so that we can afford to take this as a challenge. The threat which we are facing, the others may learn from us. Policies must be more effective. There should be a better environment where balance could be maintained.