Are the US and Iran Headed Toward War? 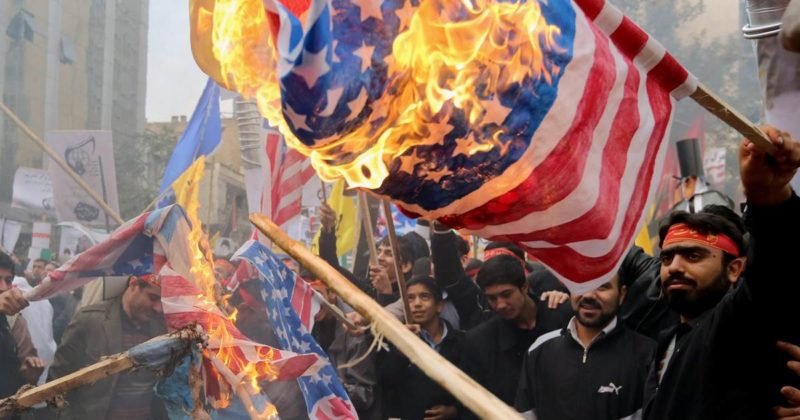 EXECUTIVE SUMMARY: On January 3, 2020, an American drone killed Iran’s roving fixer in the Middle East, Quds commander Qassem Soleimani, sparking intense, but largely partisan, reactions in the US. While Republicans lauded President Trump, many Democrats worried that the action might spark a war with Iran. But while it is easy to criticize Trump for stirring up conflict in the Middle East, Iran has helped to create the conditions of this current conflict.

Opposition to the US has been a key component of the theocratic Iranian regime’s identity since 1979. The founder of that regime, Ayatollah Ruhollah Khomeini, labelled the US the “Great Satan.” That moniker was no mere slur.

According to Khomeini, Western colonizers had infected societies such as Iran with secular values that served to undermine the more stable and independent religion-based order of the past. As the most powerful Western nation, and an ally of the brutal Shah of Iran before he was deposed, the US was a convenient target to embody the Great Satan.

For the nascent Islamic Republic of Iran, this narrative had multiple benefits. It appeased the Soviet empire, with which Iran shared a border. Shared antipathy toward the US neutralized the threat of a Soviet invasion. But this narrative also helped Khomeini rebrand Iran and assert its influence in the Middle East in direct contrast to the American presence in the region. And this is the battle in which we are embroiled today.

Relations weren’t always this strained between Iran and the US, despite Khomeini’s attempts to portray America as an existential enemy.

In 1946, President Harry S. Truman delivered an ultimatum demanding that Soviet troops leave Iran. At the time, the Soviets were pressuring Iran to gain favourable oil rights. The US was vocal at the new UN Security Council about Soviet intentions in Iran and about the importance of Iranian sovereignty, and Soviet troops departed.

In the early 1950s, the US continued to support Iranian nationalism by serving as a broker between Britain and Iran during a struggle over oil rights. Truman, in fact, blocked British plans for a takeover of oil fields and a refinery in Iran.

This history of positive relations often gets forgotten, however, because the US is blamed for the 1953 overthrow of Iranian PM Muhammad Mossadegh.

To be sure, after years of back-and-forth between the British and Mossadegh, Truman came to believe that Mossadegh’s extreme positions were bringing Iran to the brink of collapse. This view was shared by his successor, President Dwight D. Eisenhower. As Truman’s secretary of state, Dean Acheson, told his British counterpart: “If Iran did not occupy its peculiar geographic location, the problem would be much easier. It is not as though we [are] dealing with a country remote from the Soviet Union. It is in a bad spot.”

But while America played a role in the coup, the story is more complicated. The once-popular PM had become politically weak after two years of failure to reach a compromise with the British. Mossadegh appeared increasingly vulnerable to pro-Soviet political elements—a threat he made clear in a letter to Eisenhower in June 1953. Mossadegh’s vulnerabilities alienated the middle class, stirred up unrest in the officer corps, and, most importantly, turned off the clerics (a crucial part of the story that the mullahs of today conveniently overlook). The crisis peaked when Mossadegh made a desperate grab for power by dissolving parliament and trying to rule by decree.

Britain and the US persuaded Shah Muhammad Reza Pahlavi, legally the ultimate authority in Iran, to dismiss Mossadegh in the face of this direct challenge to his authority. But Mossadegh got word of his impending dismissal and arrested the officer tasked with delivering the official letter. With no official request, the Shah temporarily fled the country out of fear that Mossadegh would overthrow him.

But in the following days, protests managed to topple the embattled leader. Mossadegh and his supporters bitterly claimed that the US was responsible and had financially supported the protests. But while the CIA provided a small amount of funding that was used to stir up anti-Mossadegh crowds, the protests spread organically because of the dire state of Iran’s economy. As noted by the US ambassador to Iran, the protesters “seemed to come from all classes of people including workers, clerks, shopkeepers, students, et cetera.”

While Mossadegh’s fall was owed primarily to his flaws as a leader, it later became convenient fuel for Khomeini’s distortions about America’s intentions toward Iran. Most Iranians believed the US had engineered it to save the Shah and therefore held the US responsible for the Shah’s brutality.

In reality, during the intervening decades, the US tried—and largely failed—to persuade the Shah to democratize Iran and broaden his support. Instead, the autocrat suppressed all political groups apart from the clerics (whom he mistakenly viewed as an ally against nationalists and communists), thus paving the way for his demise. Khomeini capitalized on the clerical network and shrewdly—and falsely—promoted himself as a democratizer in 1979.

Khomeini didn’t bring democracy to Iran, but he did bring an imperial vision and an antagonism toward the US that manipulated this history for political gain.

Significantly, the theocratic government Khomeini imposed saw itself as the protector of Shiite Muslims worldwide—which resulted in engagements far beyond its borders. This idea of an Islamic papacy based in Iran owed itself to the doctrine of velayat-e faqih (“rule of the jurisprudent”), which Khomeini reinterpreted to establish himself as the highest living religious authority on Earth until the coming of Shiite Islam’s messianic Hidden Imam.

After Khomeini’s death in 1989, that role fell to his successor, Ayatollah Ali Khamenei, who continued to paint the US as the Great Satan. This mythology, coinciding with American interventions in the Middle East since 2001, has served Khamenei with a convenient pretext for expanding Iran’s influence throughout the Middle East and for picking fights with America and its allies. Like his predecessor, Khamenei sees Iran as engaged in an epic struggle against the US. As he recently told a group of Iranian students: “Do you think our battle with estekar [arrogance, meaning the US] will ever rest? This is an essence of the revolution. It’s one of our principled tasks.”

Since 2012, Iranian fingerprints have been found propping up the brutal dictatorship in Syria, as well as on the Houthi radicals in Yemen, Hezbollah in Lebanon, and Palestinian Islamic Jihad in the Palestinian territories. Iran also engineered a long con in Iraq, where it used Shiite militias to rid the country of ISIS and then establish de facto governance in what’s known as the liberated territories. Soleimani was a key architect of these actions.

When news of Soleimani’s killing broke, analysts were quick to fret that the situation could easily spiral into war, implying that Trump’s action had been irresponsible because of the risk. But that argument overlooks Iran’s shared responsibility for the current tensions and both the Islamic Republic’s stubborn insistence that it is locked into a struggle with the US and its imperial actions.

Contemporary relations between Iran and the US exist within a web of historical myths. But that doesn’t mean war between the two countries is inevitable. Rather, it is the decisions of the leaders of both countries that will determine the outcome of the current crisis. Nevertheless, so long as Iran continues to see the US as the Great Satan, similar crises, if not necessarily all-out war, will continue to occur.

Dr Gabriel Glickman Specializes in U.S. national security and foreign policy, as well as the history of American foreign policy. He can be reached at [email protected]