India needs to up its game in Myanmar amidst Chinese influence 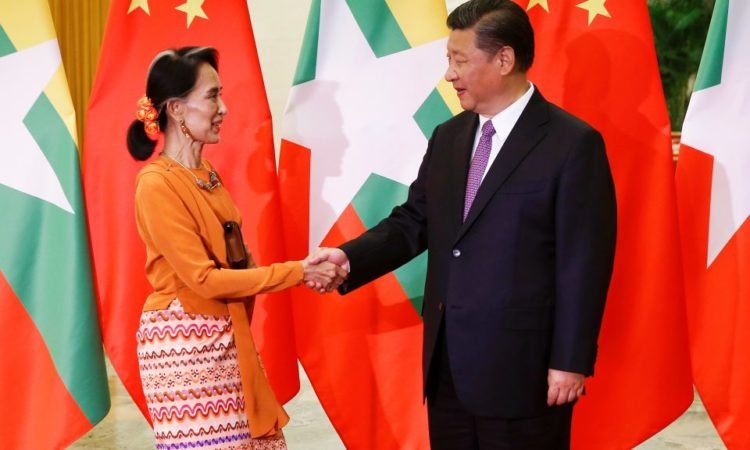 With a land boundary of over 1600 kilometres along Arunachal Pradesh, Manipur, Mizoram and Nagaland, and a maritime boundary in the Bay of Bengal, India and Myanmar share a special relationship owing to their cultural and religious association. It is a beneficial partner for the foreign policy of India as it acts as a bridge connecting India to other Southeast Asian countries, which is pivotal for deepening PM Modi’s  ‘Act East Policy’. Buddhism is another factor which plays an important role in enhancing their relationship.

India and Myanmar hold various discussions through forums where the leaders meet regularly to discuss issues concerning them. Few important ones are the Joint Consultative Commission (JCC), the National Level Meeting (NLM), the Regional Border Committee Meeting (RBCs), Joint Trade Committee (JTC). They also meet on the sidelines of various multilateral meetings like the ASEAN-India summits, BIMSTEC summits and East Asia summits and conduct state visits. Such frequent contacts between the leaders have strengthened their relationship over time.

Bilateral trade has also remained consistent with a total of US $2.18 billion as of 2016-2017. India is the fifth-largest trading partner of Myanmar, predominantly in the agricultural sector. It is also the eleventh largest investor in the country with $743.642 million on projects, especially of oil and gas sector. According to the Ministry of External Affairs, India’s development assistance is over $1.75 billion in projects like the Kaladan Multimodal Transit Transport Project; the Trilateral Highway Project, which is an East-West corridor connecting our Northeast with Myanmar and Thailand; the Rhi-Tiddim road; assistance for border area development in Chin State and the Naga Self- Administered Zone by financing bridges, roads, schools and small health centres; assistance in setting up institutions for higher learning and research, namely Myanmar Institute of Information Technology, Advanced Centre for Agricultural Research and Education, Myanmar-India Centre for Enhancement of IT Skills, India-Myanmar Industrial Training Centres; capacity assistance in public health by supporting upgradation of Yangon Children’s Hospital and Sittwe General Hospital and the construction of a 200-bed women’s hospital at Monywa; the Rakhine State Development Programme; restoration and conservation of Ananda Temple in Bagan and the repair and conservation of 92 earthquake-damaged pagodas; reconstruction of Yamethin Women Police Training Centre, etc.

The Chinese factor in Indo-Myanmar dynamics

Myanmar’s strategic location has been an issue of contention between India and China as their interests clash over the country, thereby affecting its foreign policy. Like in every other South Asian country, these two major powers try hard to counterbalance the presence of one other through various means. However, China is way ahead in many aspects as it shares deeper and stronger ties with Myanmar. For instance, it is the fourth largest investor in the country with more than $1 billion. It also provides significant assistance through grants, debt relief and interest-free loans. It remains the largest supplier of weapons and military aid since 1989 to the country and provides its army with training in the technical use of weapon systems. It has also consolidated its support for Myanmar in international forums by vetoing resolutions against the military junta of the country in the United Nations Security Council.

India had for years, neglected Myanmar in its foreign policy and these years of indifference gave an opportunity to China to take over in the country. At present, India is trying to make up for the loss and it has been successful to some extent. However, there are still problems which create a hindrance to its betterment. During Myanmar’s democratic movement following the military regime in 1962, India openly showed its support to the movement. This created a sense of enmity from different ethnic tribes like the Ahoms and Chins. Contrary to India’s action,  China stated that the internal matters of the country should be dealt with by itself without the interference of its neighbours. Also with the imposement of western sanctions and policy isolation of Myanmar, the country has been favourable towards China and is overly dependent on it. Even though Myanmar has evinced its interest in developing its dynamics with India, it still tilts towards China to sell its resources.

Myanmar’s to collaborate with China in building a 30,000-sq mike offshore economic zone to facilitate the exploitation of natural resources could prove to be a threat to the interests of India in the Indian Ocean. China has allegedly built monitoring facilities in Myanmar’s ports to keep an eye on India’s maritime activities, leaving India worrying about its security.

Why is Myanmar important to India?

Like mentioned above, Myanmar is an important gateway to bolster India’s updated ‘Act East Policy’. The highway which connects India, Myanmar and Thailand is paramount as it connects other Southeast Asian nations. Also with increasing Chinese influence in the region and gradually encircling India through its ‘string of pearls’ policy, it is imperative for India to improve its relationship with its neighbours, especially with Myanmar with which it has had a rocky past.

Myanmar is slowly transitioning from a military regime to a democratic government. This change has created a platform for many players, namely Japan, Germany and other ASEAN members to counterbalance China, thus increasing competition for India and a sign of alarm that it needs to up its game.

How can India counter China’s proximity in Myanmar?

In Myanmar, India’s lag has been China’s gain. The vacuum of indifference on the part of India and China filling it has resulted in Myanmar favouring the latter. Myanmar’s easy access to the Bay of Bengal is only one of the many assets to China’s encirclement strategy, which is detrimental to India. In reality, Myanmar is an important country for China to check on India. Keeping all these things in mind, it is important for India to revive its relationship with Myanmar.

However, much to India’s relief, Myanmar has been quite sceptical about China’s interest in the country of late as most of the business and properties in various parts of Myanmar is under Chinese control. Chinese immigrants are also increasing day by day and the fear of debt-trap policy has left the country uneasy to cooperate with China. The leaders have realised the consequences of their over-reliance on China as they have seen its own neighbours like Sri Lanka and Bangladesh falling into the pit of the debts of China. Thus, they have been looking for opportunities to improve their ties with other countries and halted several projects involving China, like the suspension of the Myitsone Dam sponsored by China. This is the right moment for India to swoop in and be the perfect alternative.

Education is one area where India can work on as it comparatively has an upper hand in this sector to China. Internal conflicts and transition to democracy has affected the education sector in the country and it is in dire need for investment in this same. India has taken up some initiatives like the establishment of Language Laboratories and Resource Centre and the Agricultural Research and Educational Centre. There has also been the establishment of a close collaboration between the Indian Institute of Information Technology (IIIT) in Bangalore and the Myanmar Institute of Technology. India could increase its investments and sponsor more projects to build educational infrastructures.

The involvement of India in the economic aspect has also not been up to the mark. Now that it is moving towards democracy, it provides ample opportunities for India to work on its interests and re-engage in this field so India should grab it. As a sign of goodwill, India could also invite Myanmar politicians who are new to democracy to give them experience on how democracy works in a diverse society.

People-to-people contact has always proven effective in improving bilateral relations. Myanmar and India have similar communities like the Kachin, Kuki, Naga and the Shan, who were separated during the creation of India and Myanmar in 1947 and 1948 and now live along the India-Myanmar border. Also, a significant Indian diaspora of around 2 million people resides and work in Myanmar, mostly in the farming sector. To enable contact between the countries, road and bus links, train services and visa-on-arrival facilities could be initiated.

With a slight aversion towards China, now is the right time for India to make up for what was lost and live to its tag of the “big brother” of the region. This will prove beneficial for its foreign policy not only in Myanmar but in the whole of Southeast Asia.