To Be or Not To Be, Waivered: Iran Nuclear Deal 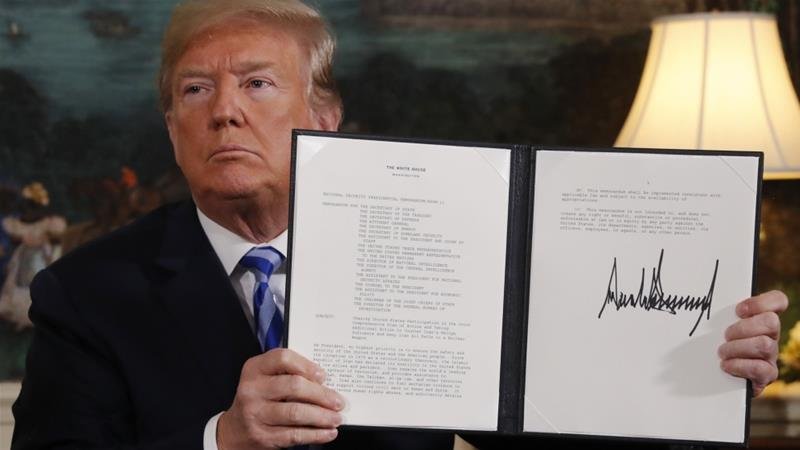 Before Obama left the White House, there was considerable pressure on him to pull off a significant diplomatic success and live up to the expectations of being awarded the Nobel Peace Prize in 2009. The Nobel Committee had emphasised on Obama’s vision of and work for a world without nuclear weapons1. After Obama failed to completely pull out of Afghanistan and Iraq, and with the Syrian theatre opening up, the Iranian Nuclear Deal or Joint Comprehensive Plan of Action (JCPOA) as officially known could be considered as an achievement of the  Obama administration bringing one of the ‘Axis of Evil’ country to the table. The agreement between Iran and the P5+1 (USA, UK, Russia, France, and China + Germany) and the European Union was meant to bring the Iranian nuclear program under monitoring by the International Atomic Energy Agency (IAEA) in exchange of easing off the existing sanctions against Iran.

The Trump administration had been vocal about the JCPOA being a badly negotiated deal since the US Presidential election campaign. Since August 2017, the US certification (needed after every ninety days) stopped which was just a step short of pulling out of the deal. In April 2018, the Israeli PM, Benjamin ‘Bibi’ Netanyahu in his signature theatrical style presented to the world evidence that Iran’s nuclear program was still on violating the JCPOA. However, IAEA officials claimed that the evidence was had already been seen by them and that Iran was compliant. Based on this revelation by Israel along with taking into consideration the various missile tests by Iran since the agreement had come into effect, the Trump administration in May, 2018 decided to pull out from the so-called ‘worst agreement’. By August 2018, USA decided to re-impose the sanctions against Iran to impose ‘maximum economic pressure’. There are also reports of Saudi Arabia and the United Arab Emirates (UAE) lobbying hard for the US pull-out from this deal2.

After the unilateral pull-out of the US from the JCPOA, all the other signatories stood their ground without giving in to the US pressure and decided to stand by the deal as Iran had not violated the agreement. It is interesting to note that the IAEA has more than ten times recognized Iran to be complying by the agreement.

This event resulted in a valuation crash of the Iranian currency in an already strained economic environment. Civilian resentment is on a rise as inflation has reached epic proportions while the country faces one of the worst droughts in its history. Interestingly, Israel tried to tease Iran by offering water technology on the internet for use by Iranians. The Israeli PM who has always maintained that they had no problem with the Iranians but with their regime, and therefore the content for the technology offered was all in Persian. The JCPOA had enabled Iran to bolster its economy by primarily selling oil but the sanctions have been an abrupt roadblock to this process. It would be interesting to see if this has any impact on the Iranian involvement in Syria, Palestine, Iraq, and Yemen.

The re-imposition of the sanctions by the US with the aim of taking down the Iranian oil exports to zero may look to be an outright economic war but is it effective? The Iranians claim that they would not be impacted even though seven hundred Iranian entities would be impacted. The narrative the Iranian regime is trying to push is that as its enemies are incapable of fighting and winning a conventional war with Iran, therefore, they are attacking Iran through terrorism (a terrorist attack in September in Ahvaz, Iran) and economic war. Iran, however, plans to bypass the sanctions by conducting trade using currencies other than dollars.

The European firms (oil companies and private businesses) conducting legitimate business with Iran have been assured support by the UK, Germany and France by the enabling of an alternative payment mechanism – or Special Purpose Vehicle (SPV) – that would help companies trade without facing US penalties. However, many companies have already halted their business with Iran as the US dollar is a still an important component in international trade. Iran has indicated that if this special mechanism does not work or rather if the other signatories bow to US pressure, then it would pull out of the deal.

A direct implication of the Iranian oil going off the market would mean that the global oil prices would go up as Iran is the third largest producer. Many countries rely on Iranian oil whose production has already decreased and discounts are being offered. These dependent countries had been hoping for a waiver from the US as the sudden halt would push their domestic fuel costs up.

Projecting itself to be the considerate power, USA provided waivers for six months to eight countries with the logic that it did not want to create a global shock in its attempt to take off Iranian oil off the market. The condition for the waiver is that the exempted eight must take steps to lower their Iranian oil import to zero within the stipulated time-frame. The exempted eight are:

South Korea and Japan have already cut their oil exports to zero even before the waivers came in. This would be an opportunity for them to purchase discounted Iranian oil for at least the next six months. Taiwan too has significantly reduced its Iranian oil imports and doesn’t seem too worried if they received the waiver or not.

While a trade war ensues between USA and China, the waiver to China is surprising to many but it seems like a balancing act by the US. China too has already reduced oil import from Iran. It is interesting to note that the daily limits for purchase of Iranian oil for China do not include the production from the Iranian projects in which China or Chinese companies have a stake. China may be exploiting this opportunity to make more purchases.

Ahead of the elections and amidst rising fuel prices, India had been demanding a waiver and has rightfully received one. Currently, the Euro-Rupee payment mechanism through an Indian bank ensures that the money generated by the oil trade is used only for peaceful purchases and not for any illegal terror-related activity. It also received exemptions to continue the work for the Chabahar Port and the railway line up to Afghanistan. Both India and Afghanistan pushed for its waiver as it was crucial for the rebuilding of Afghanistan and a key strategic investment for India to access Central Asia and Afghanistan bypassing Pakistan. A possibility of the project going into the Chinese hands cannot be denied if India had to stall the project midway due to the sanctions. Two Chinese ports of Gwadar, Pakistan and Chabahar, Iran wouldn’t be a welcoming site for Washington and New Delhi.

The waivers to Italy and Greece, the only two European countries raise eyebrows considering other European allies like Germany, Spain and France have not received a similar treatment. Both had reduced oil imports from Iran in the recent weeks. Italy earned the waiver probably due to its support to the US stands on issues like NATO and illegal immigration despite the fact that Italy is a supporter of the Iranian nuclear deal and has been one of Iran’s largest European trade partners. It is speculated that the waiver to Greece is a result of the trade ties between Greece and Israel. Also, both Italy and Greece are two top European spenders in the NATO. This act by the US is undoubtedly a key move to divide the European unity.

The waiver to the ‘on paper’ US ally, Turkey seems more like a US compulsion even though their relations have not been the best in recent times. From the Turkish offensive against the Kurds (supported by the US) to limit the Turkish role in the F35 program, the waiver to Turkey is like a candy to keep it under the US influence even as Turkey shows signs of greater engagement with Russia.

Besides the exempted eight countries, Iraq too has received a waiver to continue purchasing electricity from Iran but it has to plan out in less than two months as to how it can reduce this dependency on Iran. Even though Iraq has considerable oil reserves but has a limited power generation capacity. Without adequate power, Iraq could very well be pushed towards a civil war again.

To Trust or Not To Trust

There is a certain pattern which is interesting. Col.Gaddafi was put into the sanction trap, and to overcome which he complied; and when everything just seemed to get normal, the West sided with the rebels causing the downfall and eventual death of the ‘Mad Dog’. One of the reasons, Gaddafi had compiled was to prevent a similar fate as the Iraqi President, Saddam Hussain al-Tikriti. That is something which would be in the minds of North Korea too while it cozies up to the US even though there is the dynamic of unification of the two Koreas. Iran, which is also a key player in the Syrian and Yemeni theatre of war would be wary of re-negotiating a deal with the US over its unilateral withdrawal from the existing deal and the re-imposition of the sanctions.

Since Trump took office, the US has been trying to assert itself world over. Trump wants to send the message of ‘America First’ even at the cost of straining ties. That is the gamble he is willing to take. From imposing Countering America’s Adversaries Through Sanctions Act (CAATSA) to constantly claiming that NATO allies need to pay more to claim the military weakness of Saudi Arabia. He already has North Korea falling in line (diplomatically) to brag about but one cannot deny to loss of American credibility and trust. The pullout from JCPOA, the re-imposition of the sanctions on Iran, and selective granting of waivers are examples of how today’s battles are actually being fought economically, and in the cyberspace and aerospace too.

2 How 2 Gulf Monarchies Sought to Influence the White House