Finally, the Islamic State’s “Caliph” is “Dead”! – An Initial Assessment 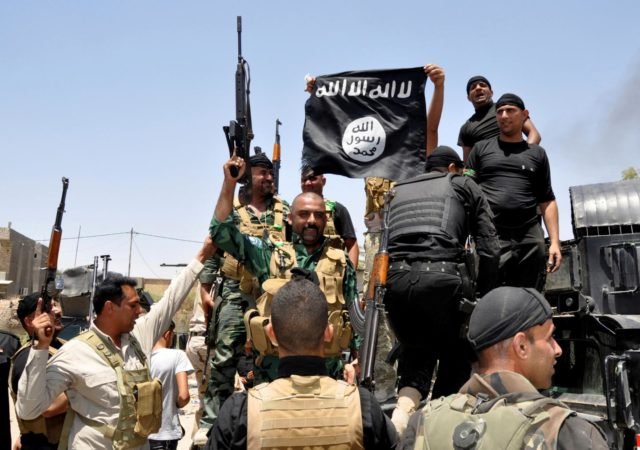 “No group or nation should mistake America’s intentions: We will not rest until terrorist groups of global reach have been found, have been stopped, and have been defeated.”

On 26 October 2019, US President Donald Trump tweeted, “Something very big has just happened!”,[2] giving no further clues and keeping the whole world guessing about his mysterious tweet. The US President’s earlier and spontaneous tweets mostly used to focus on political issues such as appointments/suspension of the members of its Cabinet or declaration of sanctions against rival nations. But this time, people around the world did not have a clue that the ‘mysterious’ tweet of President Trump was about killing of Ibrahim Awad Ibrahim al-Badri al-Samarrai, popularly known as Abu Bakr al-Baghdadi, the self-declared Caliph and Head of one of the most notorious terrorist organisations — Islamic State (hereafter IS), also known as ISIS (Islamic State of Iraq and Syria) or Daesh.[3]

Earlier also, on several occasion, rumours used to surface periodically of al-Baghdadi’s death or of his having been injured but he remained alive in some part of Syria, possibly moving around frequently, accompanied by a small group of trusted followers. In June 2017, after the Iraqi Government had, after recapturing Mosul, announced the victory over IS and declared its complete defeat in Iraq by 09 December 2017.[4] Later, in March 2019, the IS had another setback with the loss of its last and stronghold, the village of Baghouz in Eastern Syria. In February 2019, the Syrian Democratic Force (SDF) conducted operation and wiped-out IS from Baghouz in Deir Az Zor province which was the final stronghold of IS near Iraq-Syria border. [5]

Amidst all these claims and achievements, one thing was the consistently missing-the fate of Baghdadi. No agency could conclusively say that Baghdadi was dead or alive, hiding in any defined area. It was something like Al-Qa’ida leader Osama Bin Laden; one generally suspected that he was alive and hiding in the general area of Pak-Afghan border. While US agencies never diluted their search efforts for Osama Bin Laden, in Baghdadi’s case, the efforts to hunt him down were not as high pitched or high profiled.

Background and the Operation

Considering the massive response to al-Baghdadi’s 2014 call to the Muslims and converts from all over the world to congregate in Syria-Iraq region and join the war against the ‘infidels and the non-believers’, it appeared that the IS terrorists were not only attracted to the project of building the Islamic State, but more importantly to fulfill their emotive dream of re-establishing the Caliphate. The personal charisma of the self-declared Caliph—al-Baghdadi, was a major contributor in this mass mobilisation globally.

It may be recalled that in February 2004, US forces had captured al-Baghdadi and kept him in US detention centres—Camp Bucca and Abu Ghraib at different times. This is where Iraq’s most radical terrorists were usually kept. At Camp Bucca, the US authorities had reportedly taken his cheek swabs and DNA which seemed to have helped in confirming the identity of his dead body in the raid conducted on 26 October 2019 in North-West region in Syria.[6]

Going further back, in 2010, al-Baghdadi had assumed the leadership of the Islamic State of Iraq (ISI) and within four years, the ISI (not to confuse with Pakistan’s Inter-Services Intelligence) transformed into a vicious and violent terrorist organisation— the Islamic State (IS) – and in June 2014, al-Baghdadi declared himself a Caliph of the IS, claiming the lineage of Prophet Mohammad.

Till his death in a US-led Special Operation on 26 October 2019 in the village of Barisha near to Syria-Turkey border in Idlib province of Syria, Abu Bakr al-Baghdadi led the IS, carried out several deadly and brutal terrorist attacks around the world, concentrating mostly on western Europe, UK and of course, in West Asia. The inhuman murder details of dissenters highlighted the brutality and stubbornness with which he pursued the expansion of the Caliphate.

It is not yet clear nor disclosed as to when the operation started but most likely, the efforts must have started along-side the fall of the last remnants of the Caliphate, with the intelligence operatives of the alliance trying to pick up the traces of his post-Mosul movement. Clearly, it took a long time to build intelligence assets and coordinate efforts with a number of agencies working in the field. This aspect was acknowledged by the US in its opening statements carrying details.

With strong, reliable and actionable intelligence in hand and coordination among other State agencies of Iraq, Syria, Russia, Turkey and Kurdish forces, who reportedly provided intelligence or ground report, the US forces that played a significant role in the operation. A well-planned operational plan would have been drawn up, rehearsed and fine-tuned to the last details. In so doing, strict secrecy had to be maintained. On 26 October, the operation began with eight helicopters carrying elite members of US Special Operation Forces, including the Delta Force and military dogs towards the compound of al-Baghdadi in the village Barisha (near to Syria-Turkey border) in Idlib province of Syria.[8] The operation involved low altitude flying through the Russia-held territories in Northern part of Syria.

Upon arrival at the compound, the US forces breached the wall of the compound and killed “large number” of IS terrorists and captured two of them. Two of al-Baghdadi’s wives were killed during the operation, but 11 children were taken to a safe zone by the US forces. Upon being spotted, al-Baghdadi who was wearing an explosive vest ran towards a “dead-end tunnel” along with his three children. The military dogs chased him till the dead-end of the tunnel. Finding no escape route, reportedly, al-Baghdadi detonated his explosive vest, killing himself and his three children – this figure was later corrected to two children. Although his body was mutilated in the explosion, the operation team which was carrying al-Baghdadi’s DNA with them, collected test-samples that eventually confirmed his identity.

The operation was not an overnight plan but a deeply analysed surveillance of al-Baghdadi and his whereabouts. According to Commander-in-Chief of the Kurdish forces in Syria— Mazloum Abdi, the intelligence operation that led to the success of US military forces in eliminating al-Baghdadi began five months ago.[9]

Death of al-Baghdadi would certainly give a significant blow to the IS. According to IS’s media outlet—Amaq Agency, al-Baghdadi’s son and his likely successor, Hudhayfah al-Badri were also killed in an operation of Syrian and Russian armed forces at the thermal power station in Homs Governorate/Province of Syria. The Amaq agency had announced this with a poster featuring Hudhayfah holding an assault rifle.[10] Hours after the operation in which al-Baghdadi was killed, the IS spokesman and another possible successor— Abu Hassan al-Muhajir, was also reported killed in a joint operation conducted by the SDF (Syrian Democratic Forces), Intelligence operatives and the US forces on 27 October 2019 in the village of Ayn al-Bayda near Jarabulus in Aleppo Governorate in Syria.[11]

It was assumed that either one of the deputy leaders of Wilayah Iraq— Abu Fatima al-Jaheishi or deputy leader of Wilayah Libya— Abdel Baqer al-Najdi, would be the successor of al-Baghdadi. However, on 31 October 2019, the IS media outlet Al-Furqan released an audio message on its channel through the Telegram application confirming the death of Abu Bakr al-Baghdadi and announced the appointment of its new leader/Caliph Abu Ibrahim al-Hashimi al-Qurayshi. The audio message was voiced by IS’s new spokesperson Shaykh Abu Hamzah al-Qurayshi who replaced Abu Hassan al-Muhajir. The appointment of the new leader was done by the Shura Council[12] of IS after consultation and pledged allegiance to the Abu Ibrahim al-Hashimi al-Qurayshi.[13]

Reportedly, the intelligence fraternity and security forces know very little about al-Hashimi al-Qurayshi (believing al-Qurayshi is a nom de guerre). With the adoption of ‘al-Qurayshi’ in his name, the organisation has made it clear that like Abu Bakr al-Baghdadi, al-Hashimi is a descendant of the Prophet Mohammad, a key qualification to become the next Caliph.[14]

It is likely that over the next several months, apart from other consequences, death of al-Baghdadi would significantly affect the IS central command and operational capabilities of its affiliated groups around the world. With the newly-appointed leader of IS, it would be interesting to see if the affiliated groups would act on their own will and try to stage a comeback to their local conflicts in which they were previously involved, or would follow the call and carry on with terror activities under their new leader Abu Ibrahim al-Hashimi al-Qurayshi.

It may be noted here that since its formation, al-Baghdadi had played the key role in building the organisation, its expansion and in defining the agenda of IS. Despite having taken on both Iraq and Syria through intense terror activities, the group had expanded its terror footprints to many countries in Europe (in France, Belgium, the United Kingdom and Holland) and beyond into Africa (in the Democratic Republic of Congo) and South Asia (with the announcement of Wilayah of Hind and Wilayah of Pakistan, and Easter Sunday attacks in Sri Lanka). Al-Baghdadi had looked after the financial operations of raising hundreds of million dollars and generate the global propaganda network.[15] After his death, the financial survival of the group and its fighters would be in question in short-term, particularly as it has lost most of its territories, foreign fighters and the financially lucrative businesses.

The new leader thus inherits a hugely decapacitated war machine, depleted treasury and crippled network including the propaganda platforms. While one has to wait and see how far, how quickly and how effectively the IS of al-Baghdadi can if at all, recover from the blow to pursue its vision of establishing the Islamic Caliphate of IS by 2020, some of the short and medium-range forecasts could include: –

It would be a tough call for the new leader al-Hashimi al-Qurayshi to carry on the legacy of al-Baghdadi in the world of terror. It is always because of the very basic nature of such secretive organisations. The ‘leader’ comes to assume a much larger than life image and an over-powering role in the running of the outfit. They seldom allow a clear second-in-command to come up for very obvious reasons. But the IS, as a terror outfit of some consequences, is unlikely to wither away and therefore, the challenges before the security establishments around the world will continue. In fact, the task of dealing with a dispersed organisation, with many independent or semi-independent modules, could be much more difficult.

As far as India is concerned, the task of dealing with the post-al-Baghdadi phase is going to be as difficult as it was hither-to-fore. Their local modules were rather loosely liked, in fact, more like independent modules with only the recruiters and motivators having some clue of their spread and resources. So, one should expect their activities to continue as before, possibly with greater coordination at the regional level. The IS module in the Southern States of India may not be adversely affected but in Kashmir, as analysts believe, the Black IS flag may not flutter that strong. The IS brand of hardcore radicalised Islam had not found easy and wide-spread acceptance; the task may now become a little more difficult.

This was originally published at Vivekananda International Foundation Website