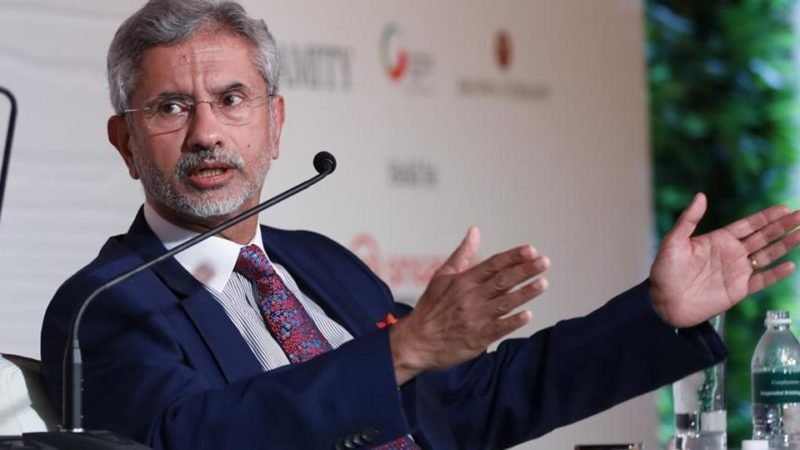 Indian External Affairs Minister in an Interview with Laura Höflinger from German media Spiegel, discusses the Indian government’s decision to scrap article 370 from Kashmir. EAM also explains how India is doing better on climate protection than the Europeans. Here are the excerpts:

DER SPIEGEL: Three months ago, the Indian government withdrew Jammu and Kashmir’s autonomy. It also arrested hundreds of people and the region’s population remained cut off from the outside world for weeks. Is India still committed to Gandhi’s values?

EAM Jaishankar: I think we have a fundamentally different understanding of what the problem in Kashmir is. Over the past 30 years, 40,000 people have lost their lives due to violence and terrorism. If we hadn’t done something about it, the next 30 years would have been just as bad. Surely, none of us, including Gandhi, would have wished that on Kashmir.

DER SPIEGEL: How do you plan to improve the situation in Kashmir?

EAM Jaishankar: Kashmir’s autonomy ultimately served only a small elite. It prevented many of India’s progressive laws from coming into force. Investments did not materialize. There were too few jobs. The lack of progress led to alienation and separatism, which in turn fed terrorism. Also, bear in mind that there are vested interests out there that want to fight us.

EAM Jaishankar: Pakistan mostly, but also certain people within Kashmir who have assisted Pakistan over the years and who have worked for their own narrow ends.

DER SPIEGEL: Politicians, such as the former Chief Minister Mehbooba Mufti, have been placed under house arrest. Why?

EAM Jaishankar: Our intention is that politicians do not engage in any activities that could serve as a magnet for violence, as it has been the case in the past. A related issue is that social media and the internet have been used to radicalize. We want to prevent the loss of life.

DER SPIEGEL: So why cut landlines? For a long time, people were completely unable to communicate with each other.

EAM Jaishankar: Because that’s how terrorists would have communicated as well.

DER SPIEGEL: But how were people supposed to call an ambulance if they needed one?

EAM Jaishankar: I’m asking you: How were terrorists supposed to be stopped?

DER SPIEGEL: The fight against terrorism justifies all means?

EAM Jaishankar: What kind of a question is that? Terrorists have killed apple traders in the past few weeks. Grenades have been thrown at markets. People have died. Why don’t you focus on any of that?

DER SPIEGEL: You feel treated unfairly by the Western press?

EAM Jaishankar: There are people with strong preset views. Kashmir’s autonomy was based on a temporary provision. But looking at the Western press coverage, very few acknowledge this aspect. There’s a reason for that: It’s an inconvenient fact!

DER SPIEGEL: Both Pakistan and China control a part of Kashmir as well. Do you feel it is hypocritical of the West to criticize India but not Pakistan or China?

EAM Jaishankar: I think the world sees Pakistan for what it is. The country openly runs a terrorist industry.

DER SPIEGEL: Which Islamabad would deny.

EAM Jaishankar: Really? Prime Minister Imran Khan speaks openly about it. I must give him that. He acknowledges that he has a terrorism problem.

DER SPIEGEL: You haven’t mentioned Beijing. Chinese companies are planning large infrastructure projects in Pakistan, Nepal and Sri Lanka. What is India doing to counter China’s influence in the region?

EAM Jaishankar: Whatever we do, we’re not doing to counter China’s influence. Take China away for a moment: We would be still be investing in Nepal, Bangladesh or Sri Lanka the way we do today. South Asia is lacking regional awareness and I fault India for it, because as the largest country, it shoulders the largest responsibility. For the past five years, we have done our best to correct that mistake. The more connected South Asia is, the better it is for us too.

DER SPIEGEL: Still, China is planning to build the new Trans-Himalayan Railway close to the Indian border. Does that not bother you?

EAM Jaishankar: There are already two rail connections between India and Nepal, and in a few years, there will be five. Nepal’s border towards India is open, towards China, not so much. Many Nepalese are coming to India looking for work. How does one compare those things?

DER SPIEGEL: Many in the West see India as a counterweight to China’s influence in Asia. How does India see itself?

EAM Jaishankar: I find the idea of being someone else’s pawn in some “Great Game” terribly condescending. I certainly don’t plan to play the counterweight to other people. I’m in it because of my own ambitions.

DER SPIEGEL: Which are?

EAM Jaishankar: In the next five years, we will likely become the most populous country in the world and, within a decade, the third-largest economy. We have a large share of the global human talent, and if I look at the role digitization will play in the future, then I feel this is going to be a world where India can contribute more. It’s not just a desire for a higher profile. We know that with more weight comes more responsibility.

DER SPIEGEL: What does that mean?

EAM Jaishankar: Let me give you two examples. First, we have a close and emotional relationship with the countries of Africa and other southern nations. These relations are difficult to understand for people who haven’t been through the colonial experience. For example, we run a significant development program in Africa that involves more than $10 billion. Second, a tsunami in the Indian Ocean caused severe destruction 15 years ago. The West responded. But today, it’s a different world. Today, we take charge. Whether it’s the severe earthquake in Nepal or the civil war in Yemen, the Indian Army went there each time.

DER SPIEGEL: Are you a player in the fight against climate change as well? India has grown to become the world’s third-largest producer of greenhouse gases.

EAM Jaishankar: We have one of the most ambitious programs for solar energy and we help other developing countries to achieve their goals. In fact, according to the research consortium Climate Action Tracker, there are just five countries whose energy policies can be reconciled with the 2-degree goal outlined in the Paris Agreement: Bhutan, Costa Rica, Ethiopia, the Philippines – and India. We are doing better than Europe.

EAM Jaishankar: You are putting it in a very absolute way. My answer depends on many factors, such as how quickly India can scale up alternatives such as solar, hydro or nuclear power. It is clear that coal is not our preferred choice. It’s just that it’s easy for someone from Germany to ask that question because your country has so many alternatives. We don’t.

DER SPIEGEL: You’d like us to be more realistic?

EAM Jaishankar: Or more generous. Or more true to your own commitments.

DER SPIEGEL: In Europe, U.S. President Donald Trump stands for a new era of nationalism and protectionism. India, too, has become more nationalistic.

EAM Jaishankar: True, but not all nationalism is the same. Nationalism in Europe is fed by the fear that old privileges may not be viable in the future. Our nationalism is positive and dates back to the independence movement. We are also not turning away from the world. We are embracing it.

DER SPIEGEL: Does India share Europe’s concerns that Trump may do permanent damage to international institutions?

EAM Jaishankar: Let me explain the difference between Germany and India: You are in an alliance with the U.S. We are not. We are used to handling different American administrations who in the past haven’t been altogether friendly towards us. We approach America as we approach many issues in international politics: with a high degree of realism. At the end of the day, President Trump is President Trump. We Indians are pragmatic people.