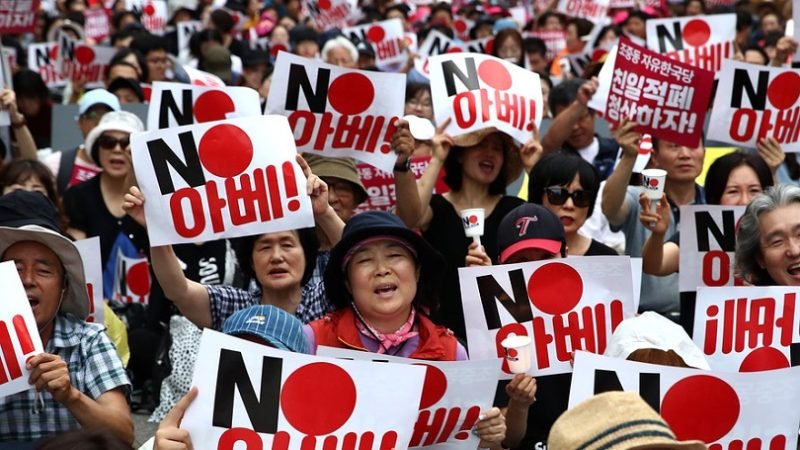 This step by Tokyo has drawn a threat of a befitting response from Seoul and further strain in relations, which are already stressed by a dispute over compensation for wartime forced labourers.

This move by Tokyo is expected to slow down Japanese exports to South Korea, as this measure could require exporters to engage in additional administrative tasks to obtain export permits. This could also be seen from the defence perspective, as there are many goods Tokyo export to South Korea, used for weapon manufacturing.

Japanese industry Minister Hiroshige Seko in a briefing termed this move as a National Security measure and not intended to hurt bilateral ties.

However, the South Korean officials held a different perspective, based on the recent Japanese move to curb exports on three high-tech materials required for memory chips and display panels, Seoul sees this a direct provocation opening a new front in the unspoken trade war between the two pacific neighbours. South Korean Foreign Minister Kang Kyung-wha in a statement said Tokyo is acting in a “unilateral and arbitrary manner”.

“We’re gravely concerned by the decision, to say the least, this coming in particular in footsteps of an earlier decision that restricts some key export items to Korea,” Kang said during a regional meeting in Bangkok.

While Tokyo has denied any political motive behind this move and backed with national security agenda, it has also highlighted what it says is an erosion of trust after South Korean court rulings ordered Japanese firms compensate wartime forced labourers.

“We are in a situation where we cannot hold a dialogue with trust,” Japanese Industry Minister Hiroshige Seko told a briefing. he said, “We want Seoul to first create an environment in which we can have a dialogue with trust. It’s South Korea’s responsibility to do that.”

Tokyo says that issue of compensation was settled by a 1965 treaty that normalized ties between the two countries.

The rift is the latest example of how a decades-old disagreement has undermined relations between the two U.S. allies, at a time when Washington wants them working closely together on North Korea. It also awkward economically, as both export-driven economies are facing sliding demand from China.

South Korea would be the first country to be removed from Japan’s white list, which currently has 27 countries including Germany, Britain and the United States.

The United States has urged its two key Asian allies to consider reaching a “standstill agreement” to buy more time for talks, a senior U.S. administration official told reporters in Washington on Tuesday.

U.S. Secretary of State Mike Pompeo said on Thursday he hoped the two would find a solution by themselves, stressing cooperation on North Korea was “incredibly important”. Seko said Japan had briefed the U.S. administration on its plans.

The fresh restrictions could deal an additional blow to South Korean chipmakers, which are already scrambling to secure key chipmaking materials after last month’s export curbs.

In 2018, South Korea bought a total $11 billion worth of semiconductor parts and equipment from Japan, accounting for nearly 20% of Japanese imports, the data