Persistence Amidst Shift: The United States Foreign Policy and the Two Koreas 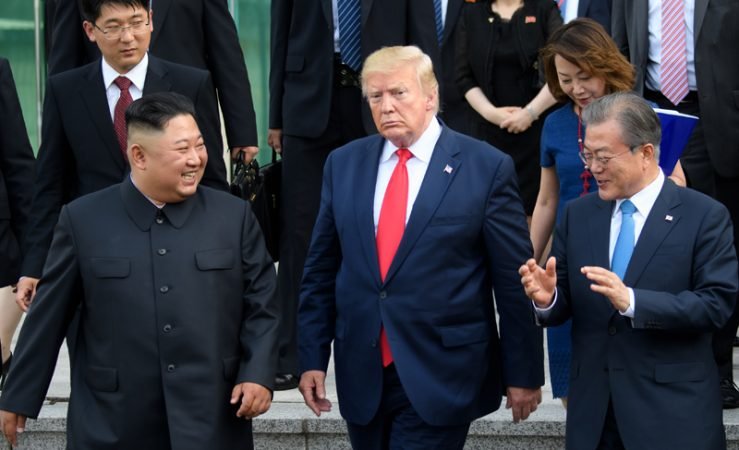 The Republic of Korea (ROK) –DPRK- United States alliance dates from the signing of the Mutual Defense Treaty on 1 October 1953. Its signing— just two months after the conclusion of an armistice agreement—brought the Korean War to a halt, and its provisions—allowing the permanent stationing of foreign troops in an intensely nationalistic country that had endured decades of colonial occupation—underpins the central role the United States had come to play in South Korean security. Initial hopes for a unified, independent Korea were not realized, and in 1948 two separate nations were established — the Republic of Korea (R.O.K.) in the South, and the Democratic People’s Republic of Korea (DPRK) in the North. In 1949, the United States established diplomatic relations with the Republic of Korea. The southern part of the Korean Peninsula was administered by an American military government from the end of World War II, and it was in the months following the withdrawal of US forces in 1949 that North Korea chose to make its devastating attack on the South. The ROk–US-DPRK alliance presents some of the most confounding puzzles and practical dilemmas of any of America’s alliances

In addition to the presence of U.S. troops, South Korea is included under the U.S. “nuclear umbrella” (also known as extended deterrence), and traditionally has paid for about 50% (over $800 million annually) of the total no personnel costs of the U.S. military presence, according to congressional testimony by U.S. military officials. To renew the SMA agreement U.S. and ROK negotiators are currently in talks. South Korean negotiators reportedly offered a 13% increase in contributions, but this fell far short of the Trump Administration’s proposal for a fivefold increase in ROK payments. This ROK National Assembly approves the and the ROK public is strongly contradicted to meeting the U.S. demand. There has been a call by  President Trump’s for a steep increase in ROK contributions, paired with his criticism of the value of other U.S. alliances, has raised concerns in Seoul about U.S. security commitments. To facilitate talks with the DPRK, Trump canceled major U.S.-ROK military exercises, leading to questions about the alliance’s readiness. The COVID-19 pandemic has further raised concern about U.S. readiness in the broader region, particularly because of acute outbreaks on U.S. naval vessels. The U.S. military is relocating its forces farther south from the border with North Korea, with South Korea paying $9.7 billion—about 94% of total costs—to construct new military facilities. The U.S. departure from these bases, particularly one in Seoul, will allow for the return of valuable real estate to South Korea. The recently opened Camp Humphreys is the world’s largest overseas U.S. base.

The ROK economy is expected to contract significantly in 2020 due to COVID-19’s domestic and global impact. In 2018, at Washington’s request, the two countries negotiated limited modifications to the KORUS FTA. South Korea agreed to a number of concessions, most prominently a delay until 2041 in reductions to U.S. light truck tariffs. Conclusion of these negotiations and the Trump Administration’s decision not to target South Korean imports in its potential Section 232 auto import restrictions have somewhat eased bilateral trade tensions. A number of U.S. import restrictions on South Korean products, including steel, aluminium, washing machines and solar products, however, continue to add friction to the trading relationship. USTR lists South Korean restrictions on relocation data exports and on cross-border use of cloud computing as key barriers to U.S. digital trade in 2020.

The U.S. relations to the Democratic People’s Republic of Korea (DPRK) are since the end of the Cold War revolving around achieving a state of nuclear-free Korean peninsula. As non-proliferation is a long term of American foreign policy, relations to North Korea could be categorized primarily under this umbrella. However, the issue of North Korean political system also plays a role as it belongs to the other important, more normative category of U.S. foreign policy which is the protection of human rights and spreading of democracy and liberal values. In addition, the North Korean issue influences U.S. relations and interests in the broader region of Northeast Asia, its bilateral alliances with South Korea (Republic of Korea, ROK) and Japan as well as sensitive and complex relations to the People’s Republic of China. As the current administration of President Donald J. Trump published its National security strategy and was fully occupied with the situation on the Korean peninsula in its first year, The options could be summarized in five categories:

North Korea would receive what it demands for a few years already in this option. It may welcome a channel for direct talks, possible peace treaty and normalization of relations., it can give North Korea a satisfaction and lead to even more assertive policy especially vis-à-vis South Korea and Japan from the negative aspects. However. In addition, the recognition would undermine the efforts and existing non-proliferation regime, regardless of the case of three non-official nuclear powers. Moreover, this would severely affect the case of Iran.

More sanctions and pressure to abandon the nuclear program

Where further can the sanction regime go, and what other areas can be sanctioned, currently it is difficult to say. However, if North Korea continues in provocations and incitements the U.S. will have support among members of the Security Council that was shown in last year several times. It was expected that the sanction regime will not bring the results and North Korea still develops both of its programs. The other factor is the unwillingness of North Korea even to discuss the abandonment of its nuclear program as was several times reiterated by its representatives.

Regime instability could lead to a potential power struggle which could lead to internal conflict on one hand, or on the other to the strengthening the regime’s grip on power. However Coordinated strategy aimed at providing the North Korean population with information about the real world, support for all the NGO’s that are involved in North Korea, etc.

In this possibility, there are few variants of group action the administration will make a choice from. There would be the chance of air strikes directed to missile bases, as has been recommended many times. The opposite are military intervention deploying not solely air force however conjointly the marines with the aim to overthrow the regime. However, any campaign would lead not solely to the destruction of DPRK, because it can retaliate and attack the Republic of Korea and probably conjointly Japan within the region. Additionally, the economic consequences are tough to predict as we have a tendency to remark conflict in the region that’s important for the world economy. Another side would be the reaction of China and the state of its involvement in the attainable conflict.

Next option is a proposal to North Korea multilateral as well as bilateral talks not conditioned by the state of the nuclear program. In a way the current administration has offered talks few times in addresses of Secretary of State R. Tiller son, to which North Korea did not respond. After New Year’s speech delivered by Kim Jung Eon when it seems North Korea is willing to talk the offer could be repeated. There is a risk that the talks will fail on the similar issues as in the past – the lack of coordination among U.S. governmental agencies on the acceptable incentives, partisanship in the U.S. but also in South Korea and lack of coordination with other partners mainly China.

Way Ahead: Commendations for the United States

Expression to a strong U.S. commitment to achieving a comprehensive settlement in Korea both to facilitate the success of the denuclearization talks and to resolve other critical security, political and economic issues on the Korean peninsula. Peace arrangements would take the form of a series of measures, outlined in further detail below, which includes a Denuclearization Agreement, a Four Party Agreement that replaces the 1953 Armistice, a U.S.-North Korea agreement for normalizing relations, a trilateral U.S.-South Korea North Korea agreement on military measures, and an agreement establishing a multilateral organization for security and cooperation in Northeast Asia that could grow out of the current Six-Party arrangement.

There should be a negotiation of a trilateral agreement among the United States, South Korea and North Korea to implement military confidence-building measures as well as to align deployments and force levels on the Korean peninsula. In these talks, the U.S. and South Korea would first agree between themselves and then negotiate the implementation of military measures with North Korea.

Convening an on-going series of meetings of foreign ministers of the countries involved in negotiating a comprehensive settlement – South Korea, North Korea, China, Japan, Russia and the United States – for the purpose of overseeing these negotiations and forming the nucleus of a new multilateral organization for regional security and cooperation. An initial meeting of foreign ministers agreed to in the Six-Party “joint agreement” of February 13, 2007, should take up these issues

The United States should Immediately propose an interim military confidence-building measures, from among those speculate for a trilateral agreement, to foster the necessary political confidence among the parties for negotiating a comprehensive settlement.

Seek bipartisan consensus in the Congress on U.S. diplomatic objectives regarding Korea. While leadership on North Korea issues remains firmly with the administration, bipartisan Congressional support will be critical for realizing.