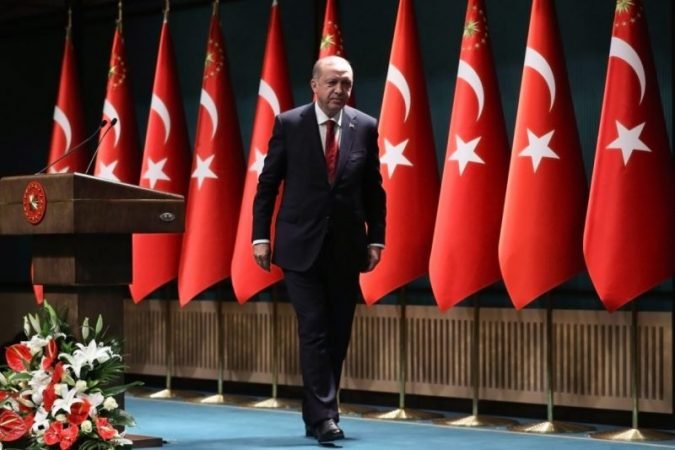 Recep Tayyip Erdogan – The democratically elected authoritarian ruler in Turkey is becoming a challenge for the secular democratic nature of the country. Erdogan’s ambition to lead the Muslim world as a Caliph and connections with terrorist organizations across the region is becoming a concern for the rest of the world. This NATO Ally is losing even its regional dominance and is distancing more from Europe. An aggressive Ankara is nearing a confrontation in the Mediterranian sea. Erdogan aims to restore the might of the former Ottoman Empire and keeps Neo-Ottomanism as his prime ideal.

Erdogan stated earlier, “ Democracy is a train. You get off once you reach the destination”. It seems Mr President have reached this destination with reference to the increasingly authoritarian turn that he has taken in recent years. There have been great concerns over Ankara’s political future, which is making itself up to be an Islamist nation shedding secularism. Sectarianism and ultra-nationalism have taken a toll in Turkey. How has a democratic, pro-western AKP turned to a populist authoritarian regime towards the later part of its 18-year-old rule in Turkey? This article presents a brief record of Turkey’s particularly Erdogan’s journey and the current domestic concerns in Ankara.

Ataturk: A name that matters

Turkey was established 1n 1923 from the remains of the ottoman empire by Mustafa Kemal Ataturk. He wanted the nation to adopt the European ideals of secularism and modernization. Thus, he abolished Caliphate in 1924 and advocated education, secularism, equality, and democracy, which made Turkey a modern republic. He experimented with various revolutionary propagandas like abolishing the headgear Fez, emancipating women by making their Education compulsory, and giving them the right to vote as early as in 1930. Kemal further went replacing the Arabic script of the Turkish language by the Latin alphabets increasing the literacy rate. He also industrialized the nation and built a scientific temperament similar to Europe. Ataturk often used dictatorship to suppress resistance to the forced modernization. Erdogan is now set out to defy Kemalist ideals and replace him as the most popular and prominent leader in Turkey. The roots of Turkey’s authoritarianism and Erdogan’s Anti-Ataturkism both lie with Ataturk. Albeit criticisms, the modern face that Kemal has gifted Turkey a modern face and his face and reforms remain even now deep-rooted in Turks. There have been constant efforts by Erdogan in undermining Ataturk’s legacy and removing his symbols and images from public places.

Erdogan’s Journey: From a reformist Prime Minister to an Authoritarianian President

Erdogan rose to prominence in Politics by becoming the first Islamist Mayor of Istanbul in 1994. The imprisonment for reciting an Islamist poem in 1997 made him give up his mayoral position and a subsequent ban in Politics. Later, Erdogan and reformists formed the Justice and Development Party (AKP) in 2001, which was projected as a democratic conservative party then. AKP’s rose was majorly attributed to the failed economic policies and political mismanagement by rulers after Kemal. AKP won the 2003 general elections in Turkey, and Erdogan became the premier who then sounded like a liberal, moderate democrat. The initial years were highly hopeful, and turkey witnessed rapid economic growth since the 2001 economic crisis with average economic growth of more than 7% per year from 2002-2007. This period witnessed a growing middle class with AKP creating a dependent voter base. AKP has also managed to decrease the role of the military in politics and bring reforms to democratic institutions.

The initial economic reforms have helped AKP to acquire its place in Turkish national politics, only to be followed by several corruption scams. By the 2007 general elections, a section of people was afraid of Erdogan altering the secular framework of the nation. By 2008, the trends in economic growth were beginning to reverse, and inequality widened again. Turkey’s EU bid and Erdogan’s dedicated contribution to it helped him cover up the increasing corruption and resist any checks on his power.

The 2011 Arab Spring was a significant point beyond which Turkey was dragged more into a rigid framework. The freedom of the press in Turkey became highly under threat by this time. Much fabricated Ergenekon scandal in 2011 in which many of the prominent persons who are vocal critics of Erdogan was jailed is an example. The 2013 attack to the peaceful protestors in Gezi park unveiled a brutal suppressive face of Erdogan. By this time, allegations of large scale corruption scandals too affected his government. Women’s rights and gender equality was also challenged when Erdogan in 2014, stated: “ Women cannot be treated equally to men” in public. Imagine the irony of the ruler of a nation stating the purpose of women is motherhood, and they are delicate in a summit meant for discussing Justice for women! The irony is that the very same nation granted equal rights for education and suffrage, much before many European nations. That symbolizes the downward growth of Turkish society from Ataturk to Erdogan.

After eleven years of the premiership, Erdogan moved to a ceremonial president role in 2014, still holding most powers with him.

In 2016, Turkey witnessed the most violent coup in its 95-year-old political history. President Erdogan merely escaped the attack, and Parliamentary buildings were bombed. The death toll was reported over 265, and over 3000 in the military were detained. Erdogan declared a state of emergency following the Putsch, explicitly targeting his critics and HDP parliamentarians and supporters, detaining them under mostly fabricated terrorism charges. Fethullah Gulen – a religious preacher who leads the Hizmet movement, was blamed for plotting and ordering the coup. Gulen being a former ally of Erdogan is now in exile in the US, and Turkey has failed in convincing Washington to release him. The education sector and judiciary were severely targeted- many teachers, university heads, and judges suspended. Later, all major political fronts in Turkey unified in solidarity, condemning the attack on democracy in Turkey. This event allowed Erdogan an opportunity to shut down major media and silence his critics under terrorism charges without being interrogated much by the western world or Turkey’s opposition parties.

Turkey’s turning point to an elected one-man “dictatorship” came up with the Constitutional referendum in 2017. It brought the most significant changes into the Turkish political system in which the Prime minister post was abolished, and the President became the head of the government and the state. This gave Erdogan immense legislative and executive powers allowing him to intervene in almost all areas of the state structure. Major public appointments, including the judiciary, now rest with President, and parliament lost all of its major powers. Turkey’s liberal democracy has been highly challenged by this excessive concentration of power in the hands of a single presidential office or a single authoritarian -Erdogan.

In 2018, with the victory of the powerful amended presidency, Erdogan had risen into the position of a supreme leader in Turkey- unchallenged and unchecked. This has been the brief of the journey that Erdogan has come through from being a hopeful, reformist leader to an authoritarian dictator, which the nation and the region are concerned.

The recent conversion of the UNESCO world heritage site Hagia Sophia into a mosque after 84 years portrays Erdogan’s attack on Kemalist Secularism. Turkey has also ordered the reconversion over Istanbul’s Chora Church. Religious minorities and non-religious are severely vulnerable. The education system is losing its scientific temper, and the number of Imam Hatip schools is increasing in the country. Erdogan himself is an alumnus of one such school; other alumni are seen increasingly grabbing political and other administrative positions in Turkey. Ankara stands top on the jailing of critics and media and shutting down press freedom, increasing after the failed coup of 2016. More restrictions on the use of social media have recently been put up. Many pro-Kurdish journalists and leaders are still in jail accused of terrorism charges post putsch.

Turkey is heavily criticized for infringement of human rights. European Court of Human Rights(ECHR) ranked Turkey second after Russia on its ranking list of human rights violations in 2019 and worst in the region. World Justice Project’s Rule of Law index ranked Ankara 107 out of 128 nations in 2020. Tens of thousands of bureaucrats, academicians are dismissed, and many are detained. Often, there are allegations of Cruel and inhuman treatment in prisons and detention. Woman’s rights are also facing a severe blow off with Turkey recently planning to withdraw from the Istanbul Convention, which advocates the personal and civil rights of women. There has been an increase in femicides and domestic violence, and the move to walk back from this treaty is highly resisted.

AKP is facing electoral backlash and has lost the 2019 Istanbul mayoral seat even after re-election. There has been a severe disappointment in Erdogan’s party, and AKP co-founders such as Abdullah Gul and Ali Babacan have already left the party. Moreover, Turkey’s structures of governance have weakened with increased allegations of cronyism and Nepotism in top positions in public services. Turkey’s highest religious organization Diyanet has been recently slammed for homophobic remarks.

The economy has suffered a severe shrink with increasing unemployment and inflation. Turkey has also been home to the largest refugee population in the world.

Tourism, which had been in peak in 2014, is also showing a backward curve since Europe’s security concerns over Ankara. Turkey is becoming more isolated from the region and the world than ever.

“ When Erdogan is gone, Turkey is Destroyed”; quoted by Erdogan in 2016, this symbolizes the one-person cult in Turkish politics played by the President. Turkey, which once has been a modern, secular state with significant developments in infrastructure and economy even after Erdogan, is now discussed in media for aggressiveness and authoritarianism. Erdogan’s pugnacious foreign policy has led to Ankara having acrimonious relations with its major neighbours. Turkey is nearing a maritime confrontation with Greece, and relation with the US is distant after Washington’s refusal to release Gulen.

Most media now in Turkey are Pro-AKP, and critical voices have been highly restricted in any front. The European Union, which once has planned to access Turkey, is now highly critical of Ankara and its domestic scenario. Turkey is important being NATO’s eastern flank and a strong western ally in the region. Can Erdogan’s personal charisma and accounts of the glorious Ottoman empire lead Turkey to its ambitious goals in the Muslim world? Chances are unlikely as it seems!