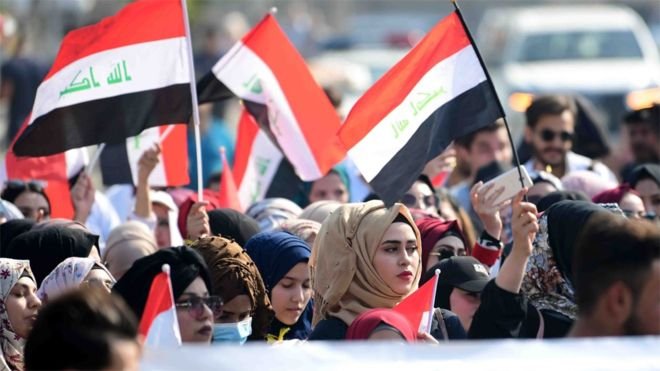 At the beginning of October 2018, two years after the final military victory over the so-called Islamic State (ISIL), Iraq was rocked by the largest wave of protests since 2003 American intervention and establishment of a democratic order. The main demands of young Iraqi protesters are more job opportunities, fight against corruption and better public services such as health care, electric power and drinking water supply etc. The situation escalated when Iraqi authorities brutally reacted to mass protests using not only tear gas but also live ammunition, killing more than 250 protesters and injuring thousands more.

The uprising swept Baghdad and the Shia south of the country, notably Basra, Nasiriyah and Maysan – the centres of oil industry accounting for about 95% of oil production in Iraq, which makes about 90% of national budget income of this restless state that is strongly dependent on production and export of oil through its southern ports in Basra.

Since 2003, protests have been daily events in Iraq, reflecting the transition from a single-party system with its cult leader Saddam Hussein to the promised democracy. However, due to massive participation of young protesters and their persistence, recent demonstrations have bewildered Iraqi authorities which are completely isolated in the carefully protected “green zone” for state institutions and foreign corpses such as the US and British embassy.

The protesters soon detected the powerlessness of their government in Baghdad that is completely controlled by Iran and the pro-Iranian Shia militia, hence the main slogan of the protests (Iran go out), the burning of Iranian flags and assaults against Iran’s diplomatic representations in the Shia holy city of Karbala.

Paradoxically, in this rich country lying on the Tigris and Euphrates river basin with the fourth-largest oil reserves in the world and a budget of $112 billion (2019), around 25% of the population, i.e. nine million (mostly young and educated) people live under the poverty threshold. Although around 55% of Iraq’s territory represents arable land, agriculture accounts for only 3.3% of GDP and employs just one-fifth of the workforce.

All this reflects the systematic weakening of the national economy as a result of 1991-2003 international sanctions and the incapable and corrupt political elites that have been in power since 2003. According to the corruption index from Transparency International, Iraq is ranked as low as 169th of altogether 180 countries which were included in the global survey on corruption.

Protests that have spread through the Shia part of Iraq, which was long the cradle of Iran’s influence, came as a shock to Iranian authorities who have in recent years boasted about having control over four Arab capitals: Baghdad, Damascus, Beirut and Sanaa, as well as a large influence on the Palestinian Authority in the Gaza Strip with the Sunni population.

The Kurdish north of Iraq does not participate in the protests since their problems are much less acute than in other parts of the country. Sunnis are afraid to join the protests, taught by the bloody experience from 2013-2014 demonstrations that were brutally suppressed and labelled as the revolt of Salaam’s regime followers, which eventually led to the birth of ISIL. In the war against Islamic State, their urban centres Mosul, Anbar and Diyala were destroyed and consequently, six million Sunnis were displaced within and outside of Iraq.

The protesters rejected the offer to reconstruct or change the government. They are aware that the power has been in the hands of the elite since 2005 and do not believe in the political system with 263 registered political parties with religious or sectarian programmes. They demand constitutional changes and introduction of the presidential system, with a hint of nostalgia for Saddam Hussein’s autocratic regime.

Constitutionality of the present political system is disputed in aspects such prohibition of discrimination based on race, religion and nationality. Namely, the function of the President of the Republic belongs exclusively to the Kurds, the function of Prime Minister to the Shia and that of the Parliament Speaker to the Sunni.  Although this is not officially laid down in the Constitution, it has been in practice since the new Constitution was adopted at the 2005 referendum.

Para-military units and militias are prohibited by the Constitution and they are regarded illegal unless they are organised by the military-security structures of the central government in Baghdad or by the Kurdistan regional government (KRG), which is an autonomous but still a constituent and parallel part of the central structures.

During the war with ISIL Iraq gave birth to Shia militias called Popular Mobilisation Forces (PMF), that have shown great loyalty to Iran. They were legalised in 2017 with the resolution of Iraqi Parliament and became a constituent element of Iraqi security forces. The ruling elite privatised national oil resources – Iraq’s main source of wealth – and transformed them into a kind of party-militia feud. The money thus fills the pockets of the elite through a sophisticated system of clientelism. In despair, the young demonstrators are willing to face Shia militias’ live bullets. In its present form Iraqi government, despite all its promises, lacks the political will and capacity to lead the state that has become so divided between political feuds.

The young no longer believe that they can change the situation through political methods. Election turnout has decreased as the voters massively boycotted the last election in 2018. Although the turnout was officially claimed to be 44%, many believe that it was much smaller – not more than 12%. The month following the election, party militias deliberately set fire to the building where ballot boxes were kept, burning more than half of them. The election results were later “rectified” by the Independent Electoral Commission of Iraq, which is obviously not so independent.

The third wave of the Arab Spring

The so-called Arab Spring began in 2011 with the first wave of protests that swept through some Arab states and deposed most dictatorships in Tunis, Egypt, Libya and Yemen. The second wave followed in 2018 when the military governments in Sudan and Algeria were overthrown. The third wave of protests is currently raging in Lebanon and Iraq, targeting the “democratic” regimes in those countries. Having been democratically elected, although far from the basic alphabet of modern democracy, the ruling elites believed they enjoyed sovereign immunity, either with the support of foreign forces (the US or Iran) or based on their sectarian democracy.

According to some analysts the three waves of Arab Spring have shown that democracy is not the magical solution that can provide clear answers to citizens’ demands, especially not in countries where the democratic process was built on sectarian or ethnic grounds, such as Iraq and Lebanon, but to a lesser degree also Sudan and Yemen.

Most protesters call for the eradication of corruption and demand the ruling elite to return the plundered assets into the state budget. They also demand the abolishment of sectarian quotas for appointing the government and state functionaries, and insist that regional and foreign forces (especially the US and Iran through their militias) stop interfering into Iraq’s internal affairs, call for the consolidation of sound state management so as to ensure jobs for the young and provide basic rights to social protection and health care.

Adel Abdul Mahdi is described as the worst Iraqi Prime Minister since the 2003 US intervention.  Despite his readiness to resign if the Parliament found another prime minister, Mahdi remained in power, mostly thanks to Qasem Soleimanj, Major General of Islamic Revolutionary Guard and commander of Quds Force, who secretly visited Baghdad at the beginning of October 2019 during the rage of protests. Leaders of two Iraqi main political blocks Muqtada Al-Sadr and leader of national mobilization forces Hadi Al-Amiri agreed to sacrifice him in order to calm down the protesters.

The present situation in Iraq is very dangerous since the protests reflect harsh conflicts between two external rivals – Iran and the United States – and the internal forces, marionettes and followers. Iraq should become the role model of democracy, respect for human rights and economic prosperity.

However, protesters went out on the streets of Baghdad, Karbala, Najaf, Basra and Amarah not at the US’s behest but due to famine, poverty, corruption, unemployment and lack of basic public services, water, electricity and medicines. Despite the country’s rich oil and other resources, one-fifth of Iraqi citizens live under the poverty threshold.

Who are the leaders of protests?

The organisers and leaders of protests in Iraq are not publicly known. Spontaneous gatherings triggered by social networks have grown into present mass demonstrations. Protest movements seeking revolutionary changes in other Arab states now aspire for the Sudan model (2019) of organising national masses. The activists in Iraq and Lebanon protests are inspired by Sudan’s example where professional and trade union associations negotiated with the army to reach the transitional period pending the formation of democratic civilian government.

Their challenges regarding the organisation of protests depend on the ability of the civil society and trade unions to consolidate their efforts within a single coordinating unit such as the Sudanese Professionals Association. In Iraq, those associations are still in the phase of transforming into an organised social and political force independent of political parties, which will be able to voice the protesters’ demands in future negotiations about eventual changes to the 2005 constitution which were initiated by Iraq’s President Barham Salih at the beginning of November 2019.

Nevertheless, the political challenges are even more complicated. Since 2003 Iraq’s political parties are formed on sectarian (Shia and Sunni) and national basis (Arabs, Kurds, Turkmens, Chaldean Catholics, Orthodox Assyrians, Sabaeans and other). Political forces are already trying to intimidate people with the return of Saddam’s party Baath or ISIL on the pretext of protecting the national interest. So far those manipulations have not affected the protesters who carry the flag of Iraq without any religious or national emblems.

Analysts have noted that Iraq can clearly no longer be led by the present sectarian system on which the political blocks are formed in the Parliament. The government cannot explain or justify the severe violation of Iraq’s sovereignty and the use of paramilitary militias of Iranian revolutionary guard to brutally quell the protesters with violence, abductions and torture. They have finally taken off their sectarian mask and revealed their true face to the public. In order to maintain their privileged status, the politicians in the Iraqi Parliament are desperate to preserve the present system and are therefore ready to continue their bloody crackdown on the protests.

The International Institute for Middle-East and Balkan Studies (IFIMES) in Ljubljana, Slovenia, regularly analyses events in the Middle East and the Balkans.