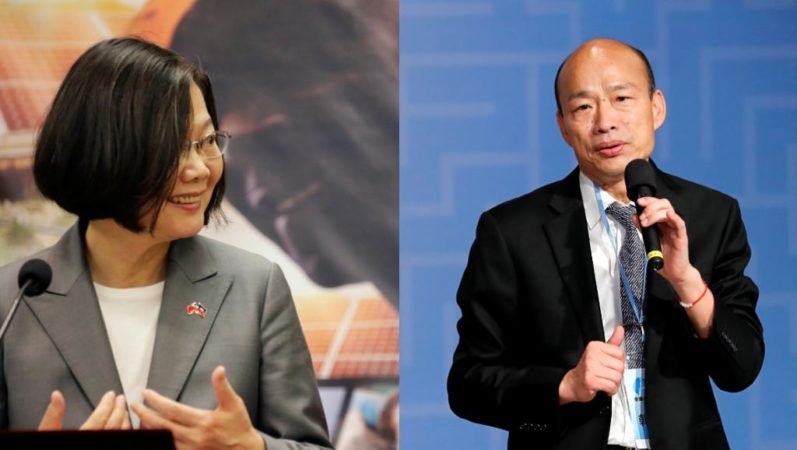 President Tsai Ing-wen and Han Kuo-yu, a candidate of the main opposition party Kuomintang, will face each other in the presidential election in 2020/Image: International News

General Elections in Taiwan are never limited to its domestic affairs, it has aggregated manifold in recent times with the intense involvement of Great Powers and multiple stakeholders immensely concerned with it. The two dominant rival factions, one advocate for the self-rule Taiwan’s independence and other for the unification with Mainland China. The current president Tsai-Ing Wen of Democratic Progressive Party, as generally conceived by masses, has failed to deliver on the issue of economic growth and on the vital Cross-Strait Policy.

Taiwan or Republic of China (ROC) is one of the highly politically sensitive island states in the world. It traces its origin as a sovereign nation-state from the initial years of the Cold War era. Once a Japanese colony until 1945 when Japan surrendered post World War II and then, the Mainland Han Chinese and ample American presence, it became a zone of contestation and confluence in its brief history. The bloodiest civil war between Nationalist Kuomintang and Communist Party of China proved out to be a turning point in its whole existence. The victory of CCP in China under the leadership of Mao forced nationalists and elites to flee the Mainland to this island territory and declare their own independence, which was supported covertly and recognized openly by the US then. The role of US intensified with the time not only as a security provider against preeminent Chinese attack on Taiwan but also to the economic aid and huge investments flow. During the Korean War with the active full-on the involvement of China, the US provided special security measures to Taiwan.

The preeminence in economic growth (one of the Asian Tigers) and democratization of island state in contrast with destitute, communist and ravaged mainland China, Taiwan was the face of China in the world during crucial years, a Charter member of the United Nations and one of the permanent members of the Security Council until 1971. These privileges ceased after the US-China détente began with the visit of US President Nixon to Beijing and opening up of the Chinese economy. This particular event changed the fate and future of Taiwan.

Taiwan follows the Presidential democratic system of governance, prior to 1996 election Taiwan used to choose the president and vice president from a ballot of the deputies of the National Assembly, in due accordance with 1947 constitution. 1996 was the watershed event in the history of island state with the first popularly elected president followed by the intimidation of Mainland China, which ultimately led to the famous Taiwan Strait crisis. So, the unification/independence debate and intermittently flaring tension with China have at times paralyzed the island’s economic growth and relationship with the outside world. The two most prominent parties i.e. Kuomintang and DPP (Democratic Progressive Party) have fought elections on the pretext of Mainland China policy vis-à-vis Taiwan.

The current incumbent president Tsai-Ing Wen of DPP is seeking another term despite the fact that she failed to deliver on the revival of tepid Taiwanese economy and the Cross-Strait relations. The relations with Mainland China has reached an all-time low under his presidency, travel ban advisory by Beijing to the island state is the hallmark of the animosity level between two.  She also reiterated her support for the mass protests in Hong Kong and strongly believes that today’s Taiwan would be tomorrow’s Hong Kong- stressing the importance of democracy and guarantee for freedom and expression.  According to a recent survey, her approval ratings drop when she pushed through unpopular pension reform. Additionally, a rival faction from her own party under Lai leadership, who served as premier in her government until his resignation in January came openly in the race. Lai asserts heavily on “Taiwanese Sovereignty” and called himself as a “political worker for Taiwan independence”. Citing the big debacle in regional elections last year of the ruling party, he stressed in the need for a change of leadership in order to evade this tumultuous situation. Tsai Believes in status quo and maintained cautious and pragmatic relations towards Cross-Strait relations. In her response, she explicitly mentioned the expanding Taiwan’s position in the international sphere, closeness with the US, which according to her resultant in the renaming of a representative office in Taiwan as “Taiwan Council for US affairs”. Also, the US pushes for the up-gradation of military and diplomatic exchanges and a key agreement to sell arms worth US$2.2 billion to Taipei. The verdict in the recent primary polls placed president Tsai as a sole candidate from her party DPP defeating the rival Lai and consolidates her stature within the party once again.

While the main opposition party KMT places a contrasting view with respect to China and tine and gains criticize the government for anti-China stance and deteriorating relations with it. The two prominent faces in the KMT for the upcoming elections renowned Foxconn chairman Terry Gou and Han-Kuo Yu presented an interesting political development in Taiwan. The former Foxconn chairman shares good relations with both the Washington and Beijing given his investment in the US and also, in Mainland China, which analyst predicted would be a viable situation for Taiwan. He even mentioned about the importance of Cross-Strait peace. The latter one Han-Kuo Yu, a Kaohsiung Mayor and often portrayed as a Beijing friendly candidate has managed to win the primary votes defeating the four other candidates including the Foxconn Chairman Gou. The 62 years old, pro-Beijing candidate describes himself as “President for the common people”. And, also said, “We are going to create an economic miracle, in which Taiwan will be safe and its people will be rich. The people will make a sacred choice for the country in the next four years. The election is a choice between peaceful Taiwan Strait or a Taiwan Strait filled with crisis. Beijing is supporting his nomination because of his support for closer exchanges and the “1992 Consensus”- that there is only One China but each side has its own interpretation of what the phrase constitutes. Analyst says if he gets elected then the Cross-Strait relations will reset and steady improvement soon. But, given his pro-Beijing stance will raise suspicion among voters about his determination to safeguard self-rule and Taiwan’s democratic system.

Taiwan is in the crossroad between the rising power China and US declining power, China under President Xi has consistently stressed on “One China policy”, in his maiden speech, he stated: “Beijing would use all necessary means, including force, to achieve national reunification. For this, Beijing has cut off communication, started military intimidation once again, and poached several numbers of Taiwan’s diplomatic allies and economic coercion and the latest travel advisory to stop its citizen to travel Taiwan.

The clear stark difference between the two candidates for the upcoming elections on alignment and engagement with the outside power i.e. the U.S and Mainland China will be the defining feature of upcoming polls and a stress test for a delicate triangle of ties. The recent Hong Kong protests provided a replica of Taiwan’s experiment with Mainland China, mainly towards reunification.