Changing the game plan of Pakistan in Jammu & Kashmir

After partition of the Indian sub-continent in August 1947 the area of the State of Jammu and Kashmir serve as the major dispute between India and Pakistan. India and Pakistan have fought three wars over Kashmir, including the Indo-Pakistani wars of 1947, 1965 and 1999. The Kashmir issue has been the main cause, whether direct or indirect of all major conflicts between the two countries. Rulers of Princely – ruled territories had the choice of joining India or Pakistan. Both India and Pakistan laid claim on Kashmir and thus it became the main point of conflict. The ruler of Kashmir, which had a Muslim majority population joined India by signing the Instrument of Accession.

Root cause and areas of conflict

The first Kashmir war started in October 1947 and ended in December 1948 with the Line of Control (LoC) dividing Kashmir into territories administered by India (Southern, central and northeastern area) and Pakistan (northern and western areas). At the time of accession Lord Mounbatten’s remark and the offer made by the Government of India to conduct a plebiscite or referendum to determine the future status of Kashmir led to a dispute between India and Pakistan regarding the legality of the accession of Jammu and Kashmir to India. India claims that the accession is unconditional and final while Pakistan maintains that the accession is fraudulent.

In the context the term Line of Control (LoC) refers to the military control line between the Indian and Pakistani controlled parts of the former state of Jammu and Kashmir a line, to this day, does not constitute a legally recognised international boundary but is the de facto border. Originally known as the Ceasefire-Line, it was redesignated as the Line of Control following the Shimla Agreement which was signed on 3rd July 1972. The two parts of the former princely state that are under Pakistan are known as Gilgit-Baltistan and Azad Jammu and Kashmir (AJK).

Another ceasefire-line separates the Indian controlled state of Jammu and Kashmir from the Chinese-controlled area known as Aksai Chin. Lying further to the east it is known as the Line of Actual Control (LAC) and has been referred to as one of the most dangerous places in the world. Thus, the overall border is running from the Line of Control, which separates Jammu and Kashmir from Pakistan-occupied Kashmir, in the north, to Wagah, which partitioned the Indian Punjab state and Punjab Province of Pakistan, in the westward. The Zero point separates the Indian states of Gujarat and Rajasthan to Sindh province of Pakistan, in the southward. On the south side of the border of Jammu Division is Pakistan’s Punjab border, and is called the ‘working boundary’ by Pakistan but ‘international border’ by India.

After the first border-related war in 1947-48, Pakistan believed that the population of Kashmir was generally discontented with Indian rule and that a resistance movement could be ignited by a few infiltrating saboteurs. Pakistan attempted to ignite the resistance movement by means of a covert infiltration, codenamed Operation Gibraltar. In fact, the Indo-Pak War of 1965 was the culmination of this game plan, designed to infiltrate forces into Jammu and Kashmir to precipitate an insurgency against rule by India. Most probably, this was launched by Pakistan believing that the Indian Army would be unable to defend itself against a quick military campaign in the disputed territory of Kashmir as the Indian military had suffered a loss to China in 1962.

However, neutral assessments made during the war and thereafter agree that India had the upper hand over Pakistan when ceasefire was declared. With no surprise both before and during the war the People’s Republic of China had been a major military associate of Pakistan and had invariably admonished India, with whom it had fought a war in 1962.

As at the end of first Kashmir war India controlled the most valuable parts of Kashmir, sporadic periods of violence, directly or indirectly inspired by Pakistan became a regular feature in the area but initially for a long time there was no organised insurgency movement. The 1965 war between India and Pakistan was the second conflict between the two countries over the status of the State of Jammu and Kashmir. The clash did not resolve their dispute but it did engage the United States and the Soviet Union in ways that would have important implications for subsequent superpower involvement in the region. From there onwards the international politics of the Cold War affected the nature of the conflict. After 1947 in comparison to Indo-US relations, US-Pakistani relations had been more consistent and positive. The US Government looked to Pakistan as an example of a moderate Muslim state and appreciated Pakistani assistance in holding the line against communist expansion by joining the SEATO in 1955. Pakistan’s interest in this and other pacts stemmed from its desire to develop its military and defence capabilities, which were substantially weaker than that of India. Both the United States and the United Kingdom supplied arms to Pakistan in these years. One side effect of the war was deterioration of conditions in East Pakistan which, although not a border conflict, culminated in Indo-Pak War of 1971, resulting in defeat of Pakistan and emergence of Bangladesh simultaneously. The Shimla Agreement signed between the two in 1972 allowed both countries to settle all issues, including the Kashmir dispute, by peaceful means through mutual discussion within the framework of UN Charter. After 1971 war taking Kashmir from India became like a perfect revenge for Pakistan. For Pakistan, it was a complete and humiliating defeat, a psychological setback that came from a defeat at the hands of intense rival, India. On the other, India was also not serious about the gaining the State of Jammu and Kashmir back to the invader and it lost the greatest opportunity to resolve the Kashmir issue once for all by forcing defeated Pakistan to totally withdraw from the illegally occupied Indian territories of Jammu and Kashmir. 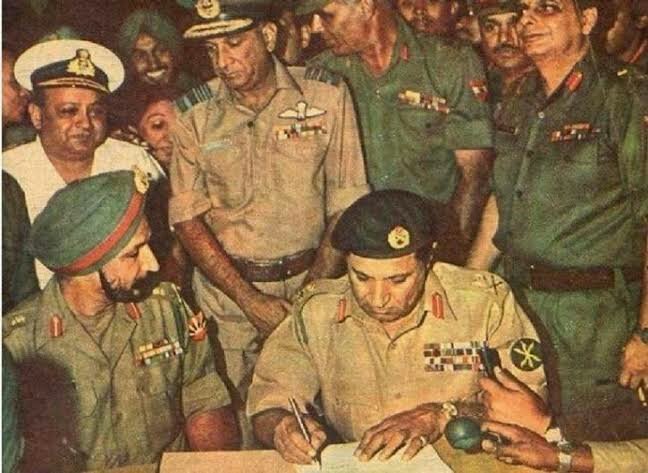 Reasons and consequences of the game plan

Pakistan, since its inception, has built considerable expertise in militancy and use of irregulars; on their own or as an extension of the Pak Army, for war. In line, three significant developments took place in post-1971 periods. First, the successful use of irregular forces and political legitimacy to organise and conduct jihad in the Afghan War. This was an extremely useful experience for Pak military. Second, the acquisition of nuclear capability by Pakistan in late 1980s, which remained covert till May 1998. This capability encouraged the Pak military to conclude that a conventional war with India was not possible. Third, loss of initiative to India in the occupation of Siachin Glacier. All these developments prompted Pakistan to make fresh attempts to annex Jammu and Kashmir through a proxy war, on the lines of Afghan War. Even during the last Kashmir war till date, in the Kargil sector in 1999, the Pakistan Army took additional step forward. Regular Army personnel shed their uniforms and dressed themselves as irregulars to intrude and fight on Indian territory. Earlier, as is well known, the Afghan War, Pak ISI siphoned off a plethora of arms, equipment and funds meant for Afghan rebels. With several million dollars of unaccounted funds, the ISI had at its disposal a large well-oiled machinery for churning out Jihad-oriented trained irregulars to be inducted into Jammu and Kashmir. As a result, a large number of young Kashmiris were covertly infiltrated to Pakistan occupied Kashmir through a porous Line of Control for arms training. The period from 1987 to 1989 saw an increase in violence and prolonged strikes in the Kashmir Valley and attacks on political leadership, police and para military forces. At Kargil, the Pak military felt confident of its success.

Unfortunately, since then, there has been a renewal of effort to fuel proxy war. In fact, in Pakistan, issues like Afghanistan, Indo-Pak relations, Kashmir and nuclear capability are areas of special concern to the military. The political leadership–when there is a civilian government– is either not briefed adequately or finds it difficult to assert on such matters. This is historical, almost traditional, and is expected to continue.

The Kashmir uprising of the last three decades can perhaps be categorised into two distinct periods-discontent over Delhi’s rule surfacing in the 1980s, leading to the rise of groups backed by Pakistan from the early 1990s onwards. The influence of militant groups such as Al-Badr Mujahideen, which was once very powerful in the mid1990s, has now waned to such an extent that it is no longer considered to present, a threat. Another group that has lost power and influence is Jaish-e-Mohammad, launched in 1999 by Maulana Masood Azhar. It shot to prominence in 2000 for its role in the attack on the Red Fort in Delhi. But its activities in Kashmir failed to elicit public support, especially after a 2001 car bomb attack on the Kashmir state legislative assembly which killed more than 35 people, all civilians. However, Lashkar-e-Taiba, a Pakistan-based militant group was formed by Hafiz Mohammad Saeed in the early 1990s put the Kashmir insurgency more firmly in the hands of Pakistanis. In the late 1990s, LeT emerged as the most dangerous militant group in Kashmir, taking the fight to Indian cities outside of Kashmir including an assault on the Indian Parliament in Delhi in 2001, and the Mumbai attack in 2008 which claimed 165 lives. Despite a Pakistani ban on military activity in Kashmir in 2006, its fighters continue to attempt infiltration into Indian-administered Kashmir.