New Chief of the General Staff of the Russian Forces, and the uncertain question for conflict resolution’s hopes 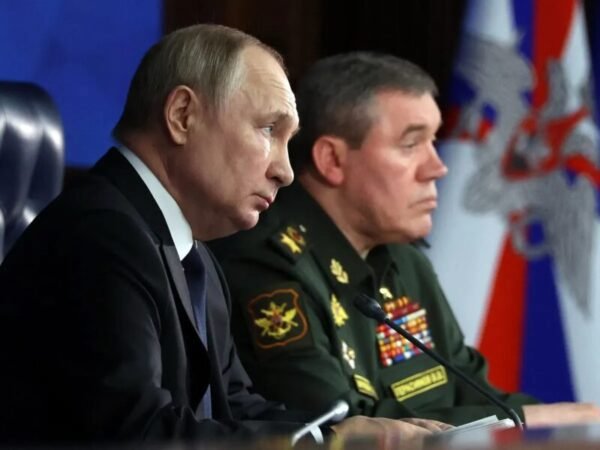 Army General Valery Gerasimov was recently appointed by the Russian Ministry of Defense to the position of Chief of the General Staff of the Russian Armed Forces. Gerasimov was also just named Commander of the Joint Grouping of Troops (Forces) on January 11, 2023. He has cumulative experience from service in the Russian military spanning several decades at the level of combat, military doctrine concepts, and implementation on the ground. He also helped modernize the Russian armed forces following the fall of the USSR. He also served as the director of the Central Military District, which includes the military departments of St. Petersburg, Russia, and the Kremlin. He joined the armed forces in 1977 and served with the Northern Group of Forces. Before being named commander in chief of the 58th Army in the North Caucasus Military District in 1999, shortly prior to the outbreak of the second Chechen insurgency, he also served in the West Asian( Middle Eastern) and Baltic Military Regions at different positions. The hardest task for him was winning President Putin’s trust in 2012 when he announced his appointment as the first deputy defence minister and Chief of General Staff of the Russian Armed Forces. He demonstrated his own capability as Russia was poised to annex Crimea and intervene in Syria in 2015. Between 2003 to 2005, Gerasimov served as the Far Eastern Military District’s head of the force. He has played a very important role in Syria for Russian national interests.

He blended tactics created by the Soviet Union with a total war military strategy. He pointed out that the basic “laws of war” had altered. The effectiveness of non-military approaches to achieving diplomatic and strategic goals has frequently eclipsed that of military targets with respective concerns of the ground situation as well. Gerasimov developed a brand-new theory of modern warfare that emphasizes subverting an adversary’s culture rather than actively combating it. The Russian commander, who is referred to as a “military guy from head to toe” by Russian Defense Minister Shoigu, has achieved international recognition as the man who is credited with developing the “Gerasimov Doctrine.” The Military Review released a required extensive planning piece by General Valery Gerasimov titled The Value of Science Is in the Foresight in Feb 2013.

Many battle experts believe that Russia’s current strategy, known as the “Gerasimov Doctrine,” best exemplifies the country’s total warfare philosophy, which unifies political and military operations. Guerrilla warfare is used in this strategy, which is fought on all fronts using a variety of players and tools, including hackers, Cyber warfare operations journalists, businesses, leaks, and, yes, Phycological warfare with uneven operational management, in addition to traditional and asymmetrical military tactics. However, it has not yet been decided which military strategy specifically he would employ for the ongoing struggle because the circumstances of the battle differ from the Russian forces’ prior experiences.

His appointment as a need of the Time

Michael Kofman, director of the Virginia-based research think tank of the Russia Studies Program,  Additionally, believes it definitely portends a specific change in military strategy, but I’m still deliberating on this choice as well as its consequences.  Ekaterina Schulmann, a Russian political expert, remarked in a radio interview that the Putin always presented himself as the “apostle of balance, the keeper of the grand harmony.” He frequently appeared in public and assured people that everything was going well and started singing them songs, assuring them that future will be identical to today.

Lieutenant General Ihor Romanenko, a retired deputy head of the General Staff of the Ukrainian Armed Services, explained to Al Jazeera that there exists a narrative angle that argues that if Bakhmut [cannot be captured], then opposing forces ought to demonstrate at last that ever since Prigozhin committed it to Putin. For Yevgeny Prigozhin, the leader of the Wagner Group, a private army in Russia, Soledar promises accessibility to mining wealth, a supply of weapons, and a greater position within the Kremlin. He has indeed been attempting for a few months to gain full control of Bakhmut, a key logistical junction that capture would enable Russian as well as separatist troops to expand far deeper into southeast Ukraine.

Up to 400 of these immigrants gathered in one residence on New Year’s Day inside the eastern village of Makiivka have been slain by a Ukrainian airstrike, according to Kyiv. Moscow, which hardly recognizes significant casualties, reported 89 fatalities and accused its soldiers of giving the enemy their identities by using smart phones without official permission. Anatoly Lopata, who throughout the 1990s held the positions of Ukraine’s deputy defense minister and head of the general staff, claimed that Gerasimov didn’t anticipate and absolutely refused the conflict planning process but his statement is different the official position and Personal position of the Geraimov.

Garimove is one of the highly experienced battle-brain for the Management of Russian Military operations but It would be challenging position for using new methods for Russian Air operations rather than use of Heavy ground troops or combating offensive speed of the Ukrainian Air-crafts that is also advanced due to French and British and American Security aid 8.99 billion (19%) Equipment and weapons: $12.7 billion (27%),   $1.3 billion (3%) in grants and loans went toward weapons and equipment, while $22.9 billion (48%) went toward overall military assistance. Among the biggest issues the Ukrainian army faces is the difficulty to immediately conveying information on the movement of the attacking force to certain other units and commands. In contrast to the earlier in the conflict more decentralized command and control, the UAF officer corps appears to be significantly centralized. However, the UAF leadership has shown adaptable and readiness to modify procedures in response to shifting conditions, especially at the unit level. Additionally, it indicates that the UAF is still using management concepts similar to those used by NATO, including granting power to lower-level commanders and local militant leadership. According to US Congress Research Report, Ukrainian Military Performance and Outlook, The UAF has also highlighted requirements in intelligence, medical assistance, and transportation. Russian cyber warfare, a dearth of dependable technologies, and ongoing communications issues make it difficult for the UAF to synchronize missions and consolidate data properly.

His appointment is also an option to prove own experiences through successful conflict resolution along with offensive or Hybrid warfare management ability that he have shown in Syria but it is not easy way when Ukraine is continuously fighting with counter-offensive stands along with Western Training assistance on the weaker position of Ukrainian Armed forces.

In response to the Kremlin’s new appointment of the Military chief, German Foreign Minister Annalena Baerbock has asked for a special court to bring charges against Russian officials, on 16 January 2023, Baerbock demanded a “new mechanism” of the court to “haul Russian officials to trial” for waging aggression on Ukraine, maybe headquartered overseas with international justices and potentially employing Ukrainian law. In a lecture to the Hague Academy of International Law, Baerbock said, “We really have to deliver a clear warning to the Russian authorities here and now that a conflict of aggression will not go unanswered.” The foreign ministers of Germany and the Netherlands have denounced Russia’s repatriation of thousands of Ukrainian children, calling it a premeditated strategy of ruthless and brutal kidnappings that is severing families. A German navy jet was allegedly tracked by Russia before being detained over the Baltic Sea, according to Moscow. The German aircraft, a P-3 Orion coastal patrol jet, did not penetrate Russia’s boundaries and returned after the conflict, according to the defense ministry of the Russian Federation. Additional military assistance for Ukraine has been revealed by British Defense Minister Ben Wallace, who also confirmed the delivery of 14 Challenger 2 tanks and provided a variety of additional specifics. Eight AS90 cannons and thousands more fortified and protected devices, notably Bulldog troop carriers, were likewise included in the arrangement.

At least 35 individuals have been killed in a missile attack on a residential building in the city of Dnipro, although the Kremlin disputes the attack’s legitimacy. Housing structures or social amenities are not attacked by the Russian military. Before referring to the “final result of certain delegates of the Ukrainian side” perhaps the attack might have been brought on by air defense systems. that was later condemned by many NATO States.

Commencement of Ukrainian soldiers’ training in the United States

At the conclusion of the previous year, Washington offered Ukraine Patriot batteries to help fend off Moscow’s constant aerial assaults. This was a major triumph for Kyiv, which had lobbied the United States for the weapon on several occasions. For defending Ukraine against attacks and stopping Moscow’s armies from taking the power of the sky, air defenses have been crucial. However, when Russia suffered failures on the battlefield, it started deliberately attacking Ukraine’s vital infrastructure. These strikes have caused millions of Ukrainians to lose heat, water, and power. Patriot has demonstrated success in Saudi Arabia over ballistic missiles of Iranian manufacture launched from Yemen, and its prime contractor Raytheon claims the device has successfully destroyed over 150 ballistic missiles throughout 2015. The MIM-104 Patriot is a surface-to-air missile (SAM) system produced by Raytheon that was intended designed to target high-flying aircraft. It must have been originally upgraded in the 1980s to concentrate on the new danger posed by tactical ballistic missiles. An extended U.S. training programme for Ukrainian forces in Germany also began at the same time as Patriot training in Oklahoma. The integrated weapons training for more than 600 Ukrainian soldiers started on Monday in the Grafenwoehr training complex. As per Gen. Mark Milley, chief of the Joint Chiefs of Staff, who attended the exercise on Tuesday, the initiative is designed to better equip Kiev’s soldiers to launch an offensive against Russia or repel its assaults.

In the midst of the North and South’s separations, the UN aspires for peace

The prolonged conflict is a significant concern for the global financial system since it has an impact on Europe, Asia, and African countries. However, it has also raised major questions about how seriously certain nations are adopting the UN’s call for a peaceful settlement of the conflict. On the other side, the North and the South have been split by the lengthy war’s battlefield, coupled with potential sources of reluctance in allegiance. According to Mr. Guterres, policymakers in Davos and elsewhere need to cross differences and reestablish collaboration to promote peace, environmental sustainability, and civil liberties as the globe face the worst geopolitical split and skepticism “in centuries.” The International Monetary Fund estimates that such a split would cost the world economy $1.4 trillion and result in two separate sets of trade laws, two dominating economies, two Intertubes, and two opposing policies on artificial intelligence. The last thing we need is this. The world’s two biggest economies might become uncoupled if there are disagreements between the United States and China, Mr. Guterres said. When the head of the United Nations warns against “North-South fractures” as a consequence of peaceful settlements, it is uncertain what genuine effort has been made for the Timetable of conflict resolution. Contrary to the roles of Turkey and Germany as the two intermediary partners by the two sides of the battlegrounds, there are also question marks of the two countries national interests as well as the leverage of the external powers who are indirectly involved in the War. It is also complicated who is playing dual cards as the mediators on behalf of whom.