Putin’s personality cult: His role and impact on the Russian foreign policy 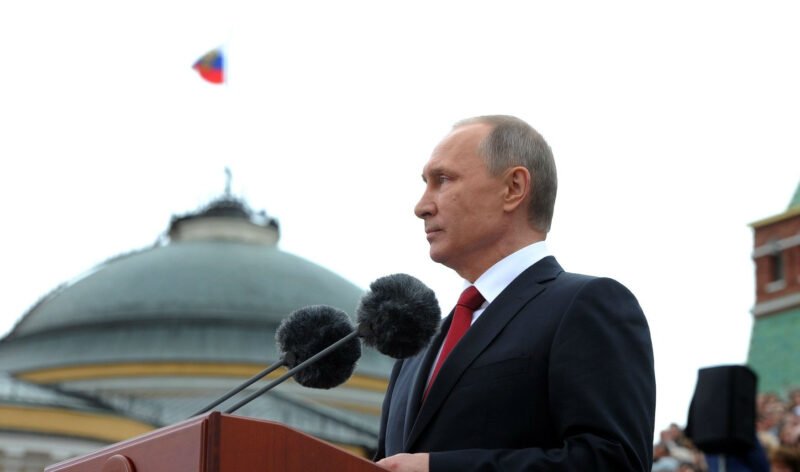 More than 30 years have passed since the disintegration of the Soviet Union. Still, Russia which is a pale shadow of the mighty erstwhile Soviet Union has been working on the ideas of “derzhavnost” ( Great power-ness). Of these more than 30 years of Russian history, Putin has ruled for more than 22 years in office, beginning in 2000. The new millennium bought with it hopes for change in Russia with new President Putin coming to power. Putin rose from a humble official holder of a mere Lieutenant colonel with a “Napoleanic height of 5 feet 7-inch” and Napolean alike ambition. Putin has been many things for many people. He has been termed a war criminal by President Joe Biden. He remains “Putka” (his childhood name) for his friends and family. What he thinks about himself and the world around him, nobody knows. The background to Putin’s rise needs a brief mention- it was the times of people being fed up with old Yeltsin’s rule of 10 years, the Chechnyan war looming over the Russian state, economic conditions in disarray with the 1998 meltdown. All these and other factors came into demand for a young, reliable, and decisive leader. Ben Judah in his work calls the rise and demand of such a leader by the Russian people a “Russian Pinochet” moment. While Putin has influenced the decision- making in Kremlin, the extent of it and the influences on Putin needs a better description.

How Putin has influenced the Foreign policy decision-making of Russia? What have been the influences on Putin- ( from Alexender Dugin, the “Siloviki” group, and his own personality.). . The argument enunciated to inform about Putin’s impact on Russia’s foreign policy is evaluated or investigated through the case study, involving the recent or ongoing Ukraine-Russia war.

Whose Interest? – Russia or Putin

Putin has been long in total control of foreign matters; however, he makes it appear that all decisions are being taken with deliberations. He has been the ultimate arbitrator of what constitutes Russia’s national interest. The past events and the ongoing Ukraine conflict suggest how Putin’s decision-making is led by personal ambitions and glory. . Putin believes Russia to be a great power, whose status never dissolved, even after the fall of the Soviet Union. “Achieving greatness for Russia’ echoes within Putin’s circle. Whether this belief is shared by others remains questionable, but largely since Putin is at the helm of foreign affairs, nobody has the option but to adhere to his self-proclaiming prophecy which drives Russia’s contemporary foreign policy. Russia’s national interest and Putin’s personal interest get muddled up quite frequently.

Even scholars have argued how the Crimean annexation of 2014 was not in the Russian national interest – as it has enhanced Russia’s dependence on China, incurred western sanctions, etc. The recent 2022 Ukraine-Russia conflict can be seen in the same light as Putin’s personal war.

Influences on Putin and the case of 2022 Conflict

Firstly, Putin’s own narrative and political thinking are shaped by the historical and cultural ties of Russia. His approach has been termed a “more militant foreign policy” due to Putin’s personal beliefs and due to insecurities from the West. Putin has a “strongman” attitude built from his years in power which is further impacted by various belief systems. He has sometimes used his “strongman” approach in eclectic foreign policy actions. For instance bringing his pet dog to a meeting with German Chancellor Angela Merkel, while knowing that she’s afraid of dogs. These actions are done deliberately as a means of power display.

In the ongoing 2022 Ukraine crisis, Putin in various speeches and writings has amplified how “Russia and Ukraine are essentially one people”. This could be seen as the personal belief of Putin who comes from the lost generation which witnessed the fall of the soviet union. In 2001, he termed the Disintegration of the USSR “the greatest geopolitical catastrophe of the 20th century”. His personal ambition as argued by many scholars is to rebuild the world order where Russia takes the “high table seat” that it rightfully deserves.

Secondly, Putin is influenced by the ideas of a group called “Siloviki“. The term Siloviki literally means “the powerful”. These are the group of people who form the inner circle of President Putin’s closed chambers. Siloviki are generally comprised of ex-KGB politicians whose main focus is on the military-security dimension. They resent the way the Soviet Union surrendered in the 1990s and they are committed to the idea of Russia as a global power.

Members of Siloviki have enrolled themself into all branches of government in Russia, with a particular focus on military-strategic agencies. To the siloviki members, treaties and agreements are mere suggestions, and their primary objective of Russia’s survival remains. This ideation is shaped by centuries of Russian history and statecraft.

Putin is surrounded by members of the Siloviki group, including Sergey Lavrov ( Minister of Foreign affairs), Sergey Naryshkin ( Director of Foreign intelligence service ), and Alexender Bortnikov ( Director of FSB) among others. These people surround Putin on daily basis and form his inner circle. Silvoki members have Putin’s ear so to speak. In the 2022 conflict, some popular Russian pronouncements about the Ukraine invasion were the brainchild of siloviki members.

Take the case of Naryshkin, who heads the “Russian historical society” which is tasked with historical revisionism. He is also the brain and core proponent behind the “Nazi-Ukraine” narrative in the enduring conflict.

Thirdly, Alexnder Dugin has been very influential in Putin’s thinking. The man has been termed as “Putin’s brain” or better “Putin’s Rasputin” in western media. His main idea is based on the common ground that Russia must transform itself into a Eurasian superpower such that it can challenge the Western hemisphere for global supremacy. For the past 25 years, Dugin has been talking about the civilizational war between Russia and the West. He argued how it would begin with the reconquest of Ukraine. His Foundations of Geopolitics work provided a detailed account of his thoughts about the antagonism between “land-based” and “seafaring” civilizations, or “Eurasianism” and “Atlanticism”. Dugin repainted the work of Mackinder in light of a spiritual struggle.

His influence on Putin and Kremlin’s statesman has been visible and vital. Russia under Putin

has not been able to forgo the “soviet ghost” and the greatness which Russia rightly deserves, according to Dugin. In 2007 Putin’s Munich speech, Dugin in one interview said, “Putin has now started to implement the program which he has been advocating for years”. On the eve of launching the war, Putin shared his essay titled “On historical unity of Russia and Ukraine”. The whole discourse on the non-existence of Ukraine as a nation was hugely inspired by the long years of Dugin’s work.

In conclusion, it can be argued that Putin has for a long has influenced and continues to influence the foreign policy outlook of Russia. Putin’s decision-making is influenced by mainly three factors

– first his own interests and ideas on how Russia should act, secondly by members “Siloviki” group in his close circle of Putin, and thirdly, the ideas of Alexender Dugin. Putin wishes to disrupt and rebuild the post-1991 world order. His desire to unify the Russian empire once again under the grand model of “Eurrainism power” is perceptible by his actions. Lastly, Putin’s relationship with Russia is rather complex, to say the least. On one side, he has led affairs for the last 22 years from times of fear of Russia’s disintegration and economic downturn to Russia being able to challenge the west. Nevertheless, it has led to Putin clinging to power for the next unforeseen years with a despotic rule. Some critics have compared Putin to a “jealous and abusive lover, telling her lover that she can’t live without her” – Ben Judith. This leaves more questions unanswered about Russia’s future. Putin was able to transform himself to provide an alternative to the “Yeltsin era”. Will the “Ghost of Yeltsin” return to Krelim taking Putin away, much like what happened to his predecessor and guide remains unanswered. Until then, the Putin era goes on and the Russian foreign policy decisions will continue to be based on the Primacy of Putin’s interest.