The US Conundrum in the Indo-Pacific 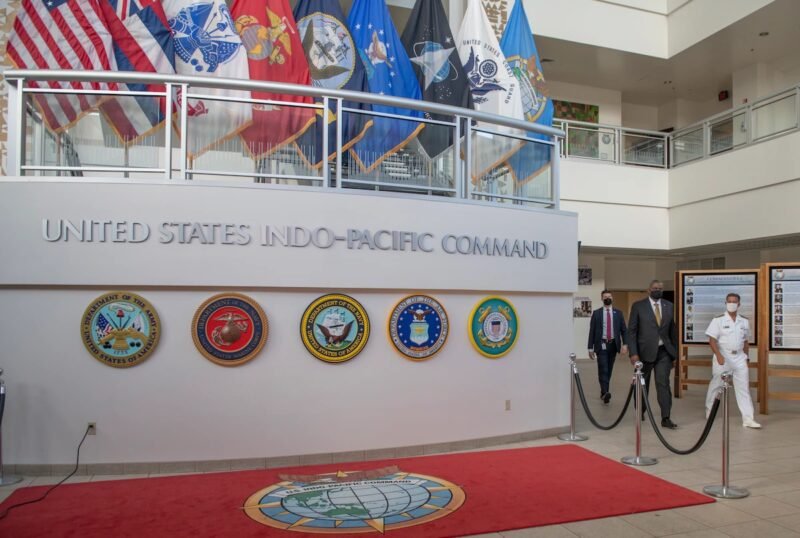 Indo –Pacific region has traversed a long path in graduating from its erstwhile terminology of Asia-Pacific such that now the former not only subsumes the latter but also carries the weight of diverse stakeholders who are both resident and non-resident to the region. The region has gained salience because of the economically viable countries it hosts, the Sea Lines of Communications (SLOCs) it constitutes and the trillions of dollars of trade which passes by it. Being a resource-rich region, the Indo-Pacific region has become the playground of extensive power politics which is led by the United States on the one hand and China on the other. Although the present scenario may be reminiscent of the Cold War era mentality, considering the linkages involved owing to complex interdependence, one should carefully refrain from making such simplistic comparisons.

The United States, after having faced no concrete results of its “long and never-ending wars”, had turned its attention to the Indo-Pacific, particularly during the Trump administration when the US Pacific Command was renamed US Indo-Pacific Command only to emphasize its growing commitment and recognition to the region. Although the mention of the region’s increasing importance was gaining ground in the multilateral forums policy documents by the US Department of State, particularly by Hilary Clinton’s speech in 2013, it was only in 2017 that the region was taken seriously at home and abroad.

However, the United States may be a non-resident dominant power in the region. Still, it is also the presence of middle powers like Japan and Australia who have played a considerable role in magnifying the importance of the region such that now the region has an active functioning security alliance in the name of QUAD; Quadrilateral Security Dialogue which holds meeting at the level of foreign ministers and heads of state and has become more active in the face of China’s assertiveness and revisionist tendencies in the region. The Confluence of the two seas speech by Japanese Prime Minister Shinzo Abe in the Indian Parliament and the mention of the pertinence of the Indo-Pacific region in the White Paper Policy document of Australia is testimony to the fact that the resident powers of the region are working hard, though at a different pace, to bring this term to fore.

The hubs-and-spokes alliance system of the United States helped attain allies abroad so that the regional status quo could be maintained, and a power shift takes place in America’s favour, with allies like Japan, South Korea, and Australia siding on the US. For instance, in the case of Japan, the signing of the Mutual Security Assistance Pact with the US brings the former under the security umbrella of the latter, and as such, it makes it dependent on it for its security for the years to come. By signing the treaty, the security threats to Japan became the security threats to the US such that providing a security shield to the same became a matter of pre-eminence. Therefore, the case of the Indo-Pacific is a glaring example where China’s belligerent behaviour both economically (debt trap diplomacy) and in maritime space (South China Sea) enables the US to indulge more in the region.

Whereas in the case of Australia, starting from the ANZUS treaty of 1951 to the AUKUS security alliance of 2021, both with the US, their strategic partnership has only enhanced with time. Having a strategic partnership with the US and an economic partnership with China, Australia has often found itself at crossroads whenever there is a rift between China and US and ended up siding with China. But with the onset of Covid-19 and its repercussions being felt home and abroad, China – Australia ties had lost their vigour, mainly when Australia joined the western nations in investigating the origin of the virus, which not only angered China but brought about a blow to their economic ties.

Whereas when it comes to India, it hinges on its posture of strategic autonomy, the base of which was the non-alignment of Cold war years. Though for India, the US is definitely the balancer in the region considering that it is still an emerging power in the region and the border tensions it faces at the hand of China. India does not explicitly reprimand China unlike Japan and Australia and advertises a relatively modified version of the Indo-Pacific region from the three countries of the QUAD by not only inserting free and open Indo-pacific but also an inclusive one which takes into consideration all the stakeholders in the region.

India is not an age-old strategic ally to the US like Australia, nor has a security shield like Japan, but it is definitely more powerful than either of them because it conducts an independent foreign policy and makes decisions based on its own policy framework and considering its own security options, the Russia-Ukraine war being the recent example.

All in all, if we eye the Indo-Pacific in the exact geographic sense then its geopolitics spans three continents and is not limited to the powers mentioned, The powers so mentioned definitely form the core of the Quadrilateral security alliance but are not the only stakeholders in the region, a fact which is often overlooked by America.  Although it is no surprise that the glorification of Indo-pacific and QUAD is also a medium to antagonise China whose belligerent tendencies in the region act as a bottleneck for America to preserve its status –quo hegemonic tendencies in the region which has long been under its influence since the World War II. The case of South Pacific islands is the case in point. America may increase the monetary aid in the region but in order to preserve and maintain its stakes in the region, it is important to understand the region in all its dimensions so that it is invested in the region in the actual sense of the term. Its extensive engagement in the Russia-Ukraine war also adds to its disadvantage that it is unable to materialize anything concrete for the region despite being an old powerful power. The lack of concrete action and the vacuum so generated by it is being seamlessly filled by China which in turn dents the multifarious partnerships America had with the region. And as realpolitik taught us that in international relations there are no permanent friends or enemies only permanent interests it becomes pertinent for America to gather itself by the way of tangible policy actions.

With the recent QUAD summit of the major powers of the region in Tokyo, there has been much pomp and show about the potentialities of the region and the opportunities it aims to offer, but the real progress would be when the US and its allies and partner could solve and rise above the irritants in the region by not just mentioning them in their documents but also by generating an output out from them. America undoubtedly has a huge role to play in the region as it is one of those powers who brought the term to the fore but its method of engaging in the region is also important considering the contemporary multi-polar nature of international politics.