Did India just support Argentina’s claim on the Falkland Islands? 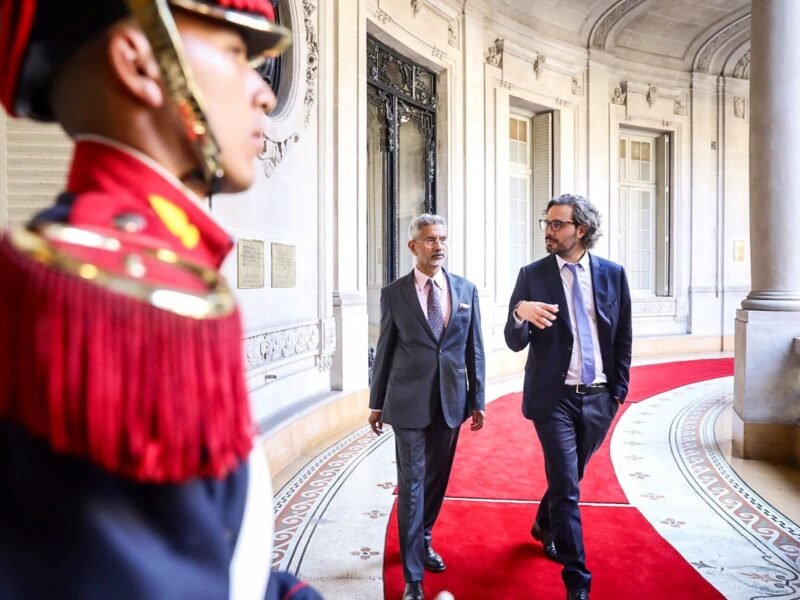 Indian External Affairs Minister Dr S. Jaishankar, who was on a three-nation trip, visited Argentina from August 25 to 26 at the request of the Minister of Foreign Affairs, International Trade, and Worship Cafiero, as per a statement from MEA.

On Friday he co-chaired a Joint Commission Meeting with Argentina’s Foreign Minister Santiago Cafiero at San Martin Palace, Buenos Aires and discussed a number of topics, including people-to-people relations, nuclear challenges, and defence.

This visit can be seen as India’s attempt to move into the geopolitical scenario of distant South America.

One of the most unprecedented parts of the joint statement released by both countries is the mention of the word Malvinas Islands. Which is the Spanish name for the disputed Falkland Islands administered by the UK and claimed by Argentina. India has always maintained its position on the Falkland Islands and asked both parties to settle the dispute in accordance with the Resolutions of the UNGA and the Special Committee on Decolonization.

“India reiterated its support to the resumption of negotiations to find a solution to the sovereignty issue relating to the Question of the Malvinas Islands in accordance with the Resolutions of the UNGA and the Special Committee on Decolonization.”

However, for the first time, India’s use of the word Malvinas Island indicates New Delhi’s changing position in the geopolitics of the Southern Hemisphere. This could also be seen in the context to follow the footstep of China’s recent support for Argentina’s claims to the Falkland Islands, gaining an upper hand in the region’s politics.

At the moment when the UK and the western world are exerting pressure on India for buying Russian oil and sharing close defence cooperation with Moscow, this seems like a response from New Delhi. This can be also seen as an effort to bridge the gap in relations with Argentina where the Chinese upper hand is visible.

The geopolitical importance of the Falkland Islands

The Islands are seen as a ‘Strategic Gateway’ to the Antarctic circle and is considered a resource-rich area.

Since the 18th century, the Falkland Islands have always been subjected to colonisation and conquests by Britain, France, Spain and Argentina. Prior to the 1700s, the islands were uninhabited, with France first establishing a colony there in 1764. The next year, when the British arrived to claim the islands for themselves, it marked the start of a dispute that has been ongoing ever since.

Strategically, the Falkland Islands were important to Britain and that was evident in how they were used by London as a military base in the South Atlantic Ocean, both during the First and Second World Wars. However, following the end of the Second World War, the islands once again became a cause of dispute between the United Kingdom and Argentina, with both asserting sovereignty over the islands.

Insisting that the United Kingdom had illegally taken the Falkland Islands from them, Argentina invaded the islands in 1982, sparking the Falklands War. The United Kingdom was not prepared for the attack and plans had to be rapidly put into motion. London was at a disadvantage because of the geographical location of the islands, approximately 7,000 nautical miles away. A little over two months after it broke out, the war ended with the United Kingdom’s victory.

On the sidelines of the Winter Olympics 2022, which also coincided with the 40 years of the Falkland war, Beijing backed Argentina’s claim to the Falkland Islands, stirring discussions around the long-standing dispute.

China’s President Xi Jinping and Argentina’s President Alberto Fernandez issued a joint statement during the Winter Olympics that said China “reaffirms its support for Argentina’s demand for the full exercise of sovereignty over the Malvinas Islands,”, with the statement using the Argentine name for the territory.

However, China’s position on the Falkland/Malvinas Islands was not new. During the two key U.N. General Assembly resolutions — Resolution 2065 in 1965 and Resolution 3160 in 1973 – China voted for Argentina’s position. Interestingly, in 1982, China, along with Poland, Spain, and the then USSR, abstained from Security Council Resolution 502 demanding that Argentina withdraw its troops from the Falkland/Malvinas – neighbouring Panama was the singular vote against the motion amongst the 15 council members. The Falklands/Malvinas territorial dispute also presents a unique military interest for China concerning Taiwan, as considerable research has gone into the developments of the conflict.