Bolivian Elections – Return of the Wiphala 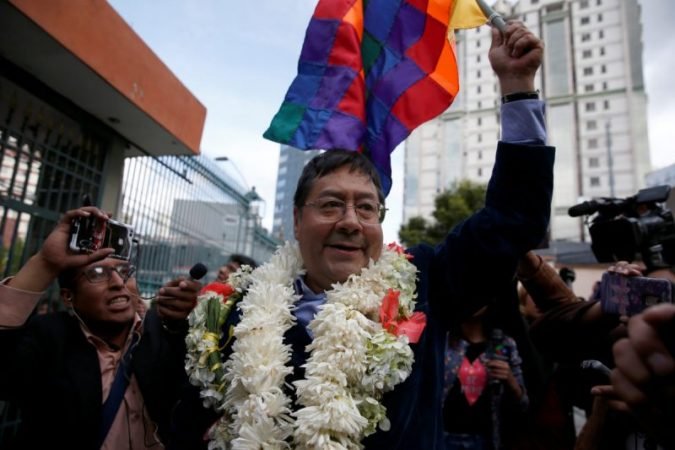 Bolivia, known for its coffee, gas and mineral resources has witnessed quite a lot of political upheavals. In 2009 Bolivia adopted a new Constitution and underwent a metamorphosis in its official nomenclature from the Republic of Bolivia to the Plurinational State of Bolivia, recognising the rights of the indigenous people who make up about 41 percent of the country’s population. The new Constitution offered more rights and liberties to the indigenous people of various ethnicities who so far were argued to have been purposefully suited for decorative and exotic purposes. It should be a reminder that like many Latin American states, Bolivia too struggled with its economy, relying heavily on the export of natural resources much to the chagrin of the indigenous people who did not receive their fair share from the exploits.

The Rise and Fall of Evo Morales

Morales, a young leader of coca farmers in the Chapare region had a history of resistance against the scandalous terms attributed to the lush crop. While the U.S. backed Bolivian military engaged in low-intensity conflicts against drugs, the age-old exploitative system incorporated by the erstwhile Spanish Empire showed no signs of ebbing. While coca farmers grew increasingly resilient against the government demanding equal rights and recognition, Morales became a voice for the oppressed nationalities decrying a system that racially profiled and criminalised the indigenous people. The Water and Gas wars from 2000 till 2005 and deeply entrenched corruption coupled with neglect provided Morales with the ground to stake his claim to the country’s highest position. His victory in 2005 showcased the might of the indigenous populace, and a new dimension was added to Bolivian politics. With most of his cabinet comprising of indigenous politicians, a new discourse centred on indigenous rights was created. The creation of the Plurinational State, entrenching a new Constitution and more rights for the indigenous people were some of his achievements. The liberal use of the Wiphala (indigenous flag), offering respect to Pachamama or mother earth, nationalisation of resources and slashing poverty rates should not be discounted. His refusal to leave power and inability to reconcile resource extraction with the rights of the indigenous people made him quite unpopular among the masses, while Jeanine Áñez’s open opposition to the indigenisation of Bolivia also made matters difficult for the indigenous people at large.

Build-up to the elections

While Morales was ousted in a coup and was forced into exile in Mexico, the interim administration headed by Áñez called for stability and elections. However, being an evangelical Christian she characterised the indigenous practices and satanic and vowed to roll back many of the promising changes that the Morales administration had brought.  While the forced exile of Morales might have been a cause célèbre, the interim administration also made it clear that elections would not happen any soon. While Áñez announced her decision to step down from the election race that would favour centrist candidate Carlos Mesa, her own ally Luis Fernando Camacho called her move defeatist in nature. Áñez was trailing at the bottom in the run-off and allegations against her personal vendetta against MAS leaders and activists in addition to the inept handling of the Coronavirus crisis did not exactly offer her the prospects of contesting.

The election and the return of MAS

While Luis Arce was clearly in the lead in the first round with an approximate 40 percent of the votes projected, Carlos Mesa came at a distant second with 26 percent of the same. It must be remembered that the atmosphere in Bolivia prior to the election was of uncertainty, as to whether the polls would be fair and if the MAS could make a comeback despite the interim administration’s harsh crackdown on critics. In all probability, the Áñez administration had created enough room to ensure that the MAS would face an uphill task especially due to the fact that Morales was compelled to go into exile and many of his supporters had now turned against him. What probably was not contemplated was that the intensity of reforms laid out by Morales in his tenures as the President had awarded the indigenous people a sense of confidence and power which had very strong roots. Even though the people were upset at his unwillingness to let go of power, they had sympathy for the MAS and the antics of the Áñez administration had made it clear that all these years of progress and historic justice would end if power would go into the wrong hands.

Voters were scared about the possible political violence and believed that the overt polarization would inevitably affect the republic. Fortunately, voter education, campaigning, safety measures against the Coronavirus played its part well reassuring the voters of a fair poll. In fact, Carlos Mesa the opposition leader also declared prior to the polling that he would accept the mandate even in the face of a defeat. The mandate also exhibited a high degree of political maturity that the people of Bolivia exhibited. The lack of violence and the acceptance of the mandate showed that Bolivians desired a peaceful poll and a stable government.

On assuming power, newly elected President Arce and Vice-President David Choquehuanca declared their intent to continue the progress made by the previous administration under Morales, while systematically criticising the interim administration that not only failed to cope with the Corona Virus crisis but was also unable to resurrect the dwindling economy. With a 90 percent voter turnout that handed a clear victory to the MAS candidate, Luis Arce who managed to obtain 55 percent of the vote share, it explains the faith the people of Bolivia have in the MAS and its socialist-oriented dimensions. The Áñez administration could never gain ground in the year-long period, depending on rhetoric rather than on execution of people-friendly plans.  One of the timely actions undertaken by the nascent government was to reassign the High Command of the Armed Forces by authorising Jamie Albert Zabala Saldía, replacing Áñez loyalist Carlos Orellana. This indicates the intention of the government to restrict the military away from affairs pertaining to the civilian administration. Facing an uphill task, the Arce administration has to undo all the events inspired by the Áñez administration in the past one year.  Luis Arce will also have to deal with the crisis caused by the Corona Virus, a dwindling economy and an unsettling opposition.

As a former Finance Minister under the Morales administration, President Arce has a task cut out for him that requires him to handle a possible economic crisis in Bolivia and also ensure that the mandate earned is not wasted. While Morales did manage to reverse a plethora of historic errors, the task has to be carried forward by the current administration. Perhaps, it was his excellent administrative abilities that saw poverty rates slashed while registering an average growth of 4.6 percent in the 2000s. However, as political pundits opine the anger against Morales is visibly present and the victory of the MAS should be viewed as a victory against the Áñez administration coupled with the faith in Luis Arce and his promises. While Arce has visibly distanced the administration from ex-President Morales, it would be imperative to observe if such a solution persists for long.

The victory of the MAS, unexpected to some extent can be ascertained as a victory of the indigenous people. While speculations were rife about a possible setback for the MAS and consequently repercussions on the indigenous people, the comeback made by the MAS debunked any chances of a reversal. Indeed, the previous administration under Morales had made tremendous progress with regards to indigenous rights, steering the economy in a fruitful direction as well as initiating the regular use of the Wiphala and the traditional costume consisting of the Pollera. From seeking blessing from the indigenous Gods at Tiwanaku to swearing on the name of Pachamama, Bolivia under the Morales administration made recognition of its indigenous past visible. Years of colonialism, domination and inadequate representation of the indigenous people in all walks of life were reversed. Perhaps the Áñez administration erred on more occasions than Morales. While Morales refused to give up power and desperately clung to it, the reversals caused by the interim administration of Áñez displayed a blatant disregard for indigenous rights and traditions. From burning the Wiphala to openly mocking indigenous traditions it made the indigenous people who are an overwhelming majority realise that the elections would be decisive in nature. An incorrect administration would reverse all the progressive accords made in these years, which perhaps would never be corrected again. The victory of the MAS not only in terms of the office of the President and the vice-President but also in both the houses of the legislature exhibit a strong indigenous assertion never witnessed before. Not only does it ensure stability but also is a shining beacon for other indigenous nationalities in various Latin American states to correct historic wrongdoings that were instituted in the name of civilisation.