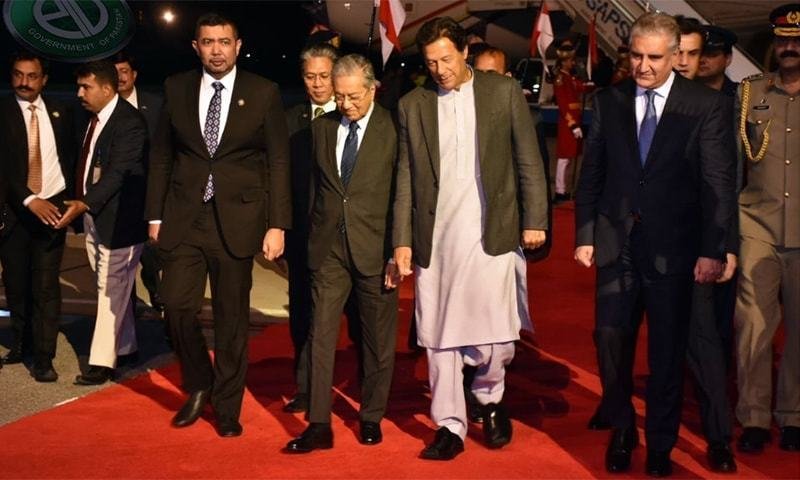 Malaysian Prime Minister Mahathir Mohamad visited Pakistan from March 21-23, 2019. In November 2018, Pakistani Prime Minister Imran Khan visited Malaysia. During his visit to the Southeast Asian nation, Khan extended an invitation to Mahathir to attend Pakistan Day Celebrations (which falls on March 23). The Malaysian Prime Minister consented and was the Chief Guest for the Pakistan Day celebrations. Pakistan conferred the Nishan-E-Pakistan, the highestcivilian award, on Mahathir. Pakistan President Arif Alvi presented the award to Mahathir. The last foreign dignitary to be awarded the Nishan-E-Pakistan was Saudi Crown Prince Mohammad bin Salman during his Pakistan visit in February.

Pakistan has been trying to draw foreign direct investment, and one of the important developments during Mahathir’s visit was the ground breaking ceremony for Malaysian car makerProton’s assembly plant near Karachi in Sindh Province. The ceremony was jointly witnessed by Mahathir and Khan. The plant is a joint venture between Proton and Alhaj automotive and it is Proton’s first factory in South Asia. Memorandums of Understanding (MOU’s) between both countries were also signed for other projects. Precise details with regard to these MOU’s were not provided. According to senior officials in the Pakistan government, these were estimated at between USD 800-900 million. Both countries also decided to set up bank branches in each other’s country with a view to strengthening bilateral economic relations.

Malaysia and Pakistan also agreed on giving a push to the level of bilateral trade. In November 2007, the Malaysia-Pakistan Closer Economic Partnership Agreement (MPCEPA) was signed in Kuala Lumpur, and the agreement entered into force in January 2008. Bilateral trade between Malaysia and Pakistan was estimated at a little over USD 1.35 billion, and was heavily skewed in favor of Malaysia. Ever since taking over as Prime Minister, Imran Khan has on more than one occasion reiterated the importance of increasing Pakistani exports. From the strategic point of view, Mahathir’s visit was important. Malaysia evinced interest in buying not just commodities like rice and halal meat, but also JF 17 jets which are jointly developed by Pakistan and China. It would be pertinent to point out that Azerbaijan is already in negotiations with Pakistan for purchasing JF 17 jets.

According to a joint statement, Khan and Mahathir exchanged views on a number of important geopolitical issues such as the present state of the India-Pakistan relationship, the Rohingya issue and the situation in Palestine. Malaysia and Pakistan also agreed to collaborate on issues impacting the Muslim world. Mahathir drew attention with his remark on India-Pakistan tensions, saying that Malaysia will not take any sides. The Malaysian PM made it unequivocally clear that his country wanted to pursue good relations with both countries. He did, however, speak out against terrorism of any kind.

Another important point which the Malaysian PM made was that due to their economic dependence on the West, Islamic nations could not take an independent stance on crucial strategic issues. Significantly, the Malaysian PM spoke up against Israel, saying that Malaysia shares cordial relations with every country other than Israel. During a joint press conference, Khan praised Mahathir for speaking fearlessly and not buckling under any external pressure. While praising the Malaysian PM, Khan said: “You say things which other Muslim leaders are scared to say. And it’s because a lot of them are not leaders.”

Khan also highlighted Malaysia’s remarkable economic progress and the stellar contribution of Mahathir towards the same. It would be important to point out that Khan praised Mahathir on a number of occasions. During his visit to Malaysia in November 2018, Khan said that Pakistan would seek to learn from Malaysia’s economic progress. After Mahathir’s election win in 2018, Khan (who was not Prime Minister then) had congratulated Mahathir and made the point that the ex-PM Najib Razak was removed due to corruption. Khan’s party the Pakistan Tehreek-E-Insaf (PTI) had fought the election on the plank of anti-corruption. Khan is of course not the only Pakistani leader who looks up to Mahathir. During the 2018’s election campaign, Shehbaz Sharif, brother of former Pakistan PM Nawaz Sharif and who led the party’s campaign, also said that he would emulate Mahathir and Turkish President Recep Tayyip Erdogan.

While Khan praised the Malaysian PM for being bold, he himself failed to raise the issue of ill treatment of Uighurs in Xinjiang, even with China. During an interview with a Turkish media agency in January 2019, the Pakistan PM stated that he did not know about the Uighur issue. More recently, in an interview with The Financial Times,Khan again claimed that he could not comment on the ill treatment of Uighurs, since he did not know much about it. According to a report in the Washington Post, more than 1 million Uighur Muslims have been put into concentration camps. Not only are these camps used for the promotion of Chinese language and propaganda, Uighurs are also made to renounce their own faith. Pakistan’s stance on this issue (resulting out of its economic dependence upon China) has been called out on more than one occasion. To be fair, it is not just Khan, many other Islamic nations which speak up against ill treatment of Muslims in other countries have failed to utter even a word against China’s human rights abuses in Xinjiang.

From the aspect of skewed economic relationships, Mahathir took no time to scrap Chinese infrastructure projects which were not economically viable, and did not refrain from warning China against promoting a “new form of colonialism” (Mahathir was alluding to the skewed economic relationships between China and smaller countries). While many were once hopeful that the Khan-led PTI government might renegotiate certain Chinese projects, that had not been the case. Khan’s adviser on commerce, textiles, industries and investment Abdul Razak Dawood, in an interview with the Financial Times, stated that the previous PML-N government had not negotiated the China Pakistan Economic Corridor (CPEC) agreement well and that certain projects needed to be put on hold. Later, Abdul Razak stated that he had been quoted out of context. Beijing did not take kindly to his statements. China in fact stated that CPEC was not responsible for Pakistan’s debts.

Given Pakistan’s precarious economic situation and dependence upon China, senior officials of the PTI government have been extremely cautious in not criticizing the CPEC project in public. During Khan’s visit to China in November 2018, Beijing agreed to give an aid package of USD 6 billion to assist Islamabad in dealing with a balance of payments crisis. China, while stating that it would help Pakistan to the best of its abilities, refused to divulge any details with regard to the assistance.

Khan would do well to pay heed to Mahathir’s emphasis on having an independent foreign policy and taking a strong stance against terrorism. The former cricketer has been in office for a little over 7 months, and it is unfair to expect a transformation in such a short span of time. Rather than depending upon China, Pakistan would do well to strengthen economic ties with neighbouring countries in South Asia, especially India. For doing so, he will need to alter the dynamic of the civil-military relationship, which seems rather difficult as of now. As the Pakistan Army and the Inter-Services Intelligence are in charge of key foreign policy issues, there is not much scope for improvement of Pakistan’s ties with India. This means that Islamabad’s dependence upon Beijing is likely to only increase. The Pakistan PM has promised to alter the status quo, but if he allows the writ of the Pakistan army and intelligence agencies to run on key foreign policy issues, he is only perpetuating it.

Tridivesh Singh Maini is a New Delhi-based policy analyst associated with The Jindal School of International Affairs, Sonipat. He can be reached at [email protected]