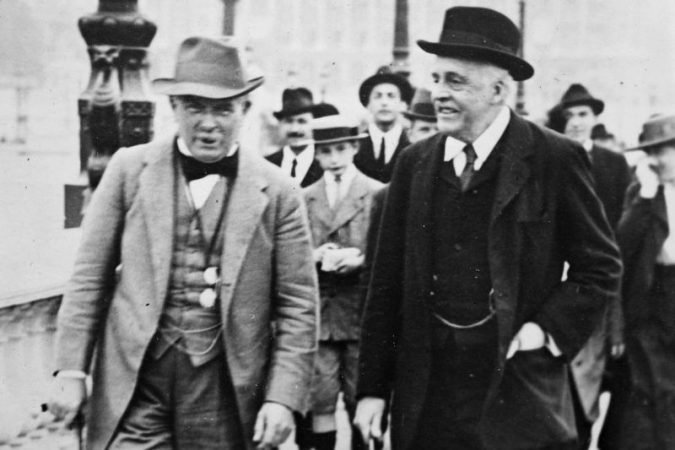 On 2nd November, Israel marked 103 years of the historic 67-word document undersigned by Arthur Balfour that left behind a legacy for the Zionist movement. The Balfour Declaration called for a “national home” for Jews and for the first time in 2,000 years publicly recognized a link between Jews and Palestine territory. But this year will be special for another reason. Sudan became the third Arab country this year to normalise ties with the state of Israel after UAE and Bahrain. Meanwhile, the media has reported a possible meeting between Netanyahu and Saudi Crown Prince in the presence of the U.S. Secretary of State Mike Pompeo.

The Legacy of Balfour Declaration

While Theodor Herzl, one of the founding fathers of Zionism is regarded as the architect of the Balfour Declaration, it is incomplete without mentioning Chaim Weizmann. A biochemist by profession, he is credited with developing acetone that aided the British war industry.

Weizmann’s meeting with Balfour in 1906 is considered one of the defining moments in Zionist history with the refusal to accept a Jewish home in Uganda and impressed upon Balfour for his commitment towards the cause. Weizmann along with his British contemporaries Herbert Samuel, Llyod George and Walter Rothschild, to whom the letter is addressed, pushed forward the Zionist aspirations in Britain during the World War I years.

The Balfour Declaration became central for an impasse in Arab-West relations. Weizmann in one of his writings said “[The wording] would mean exactly what we would make it mean -neither more nor less.” But no defined territory in declaration makes it impossible to have a singular meaning. For Zionists, it meant entire Palestine as a national state while for Arabs it meant an autonomous territory within a part of Palestine. Although it mentioned “no prejudice to the civil and religious rights of existing non-Jewish communities in Palestine”, the Arabs consider it a product of imperial behaviour as the territory promised to Jews was not under the British empire. The British entered Jerusalem to end the Ottoman Empire in December; five weeks after the declaration came out. A single piece of paper led to immigration (Aliya) and investments worth eighty million pounds sterling, almost double the British budget for the period while leaving the existing 95% of Palestine community a minority in their land.

The Contemporary Realities of Middle East

The declaration is an example of how foreign policies of states are determined by national self-interest and what drove England and Zionist leaders to work together. Appeasement of American Jews for American support of the allies in the ongoing war along with the geostrategic importance of Palestine to act as a buffer state for the economically critical Suez Canal dominated British interests while Jews eyed the creation of a national home. British were cautious to avoid double loyalty, calling for “protection of rights and political status of Jews in other countries”.

In contemporary times, the deal is considered to be done in the backdrop of a rising power in the neighbourhood, Iran. While this brings the three important powers in the Middle East closer, it has reduced the bargaining power Palestine holds in the region. Egypt was the first Arab country to set diplomatic relations with Israel in 1978 after the peace treaty concluded at Camp David Accords. Jordan followed in the 1994 Peace Treaty and became the second Arab country to normalize the relations. Although there has been a backdoor collaboration between Israel and in some of the Arab countries, the move from UAE comes after 26 years since the last peace treaty of Israel that brought a positive outcome. Moreover, UAE became the first Gulf country to make peace with Israel followed by Bahrain, the second Gulf country.

After the landmark, ‘Abraham Accords’, reports suggested Morocco will be the next WANA (West Asia-North Africa) country but have been recently refuted. In the meantime, Sudan lawmakers came out in support of the US-brokered deal and formalized the agreement. Given the internal politics of the country, prominent factions are divided over the peace deal, some even rejecting it. The National Consensus Forces Alliance is one of them. It released a statement reminding the Sudanese people and government of the Three Nos commitments. The historic Three Nos agreement was signed post-1967 war in the capital of Sudan itself, Khartoum. It states “no recognition of Israel, no peace with Israel and no negotiations with Israel” and became the base for the “land for peace” agenda. The opposition argues that law prescribes for a vote of approval from the Sudanese National Assembly, that isn’t in session since the former President Omar al-Bashir was toppled following months of protests in April 2019. The deal was confirmed by a transitional government. It is being argued among the academic and diplomatic circles that Sudan, a hardline critic of Israel since 1948 gave in to the pressure from its inclusion in the US state sponsors of terrorism list. Battling with a grave economic, political and civil crisis, Israel along with other Middle East countries offered help in the form of foodgrains. Others have called it a PR stunt to give the last boost to Donald Trump presidency in the US elections scheduled for less than a week.

Similar to the betrayal felt by Palestinians in 1917, the events of the last few months have raised questions on the eventual sidelining of Palestine issue in Middle East politics and the disintegration of “land for peace” call. It has been called out by pro-Palestine states and organizations for ignoring the plight of Palestinians and overlooking atrocities of the Netanyahu-led Israel government.

Palestinian Authority President Mahmoud Abbas said that he rejected the new agreement, as “no-one had the right to speak on behalf of Palestinians”. Iran accused Sudan of selling out the Palestinians in return for being taken off the U.S. list of terrorist nations. Hezbollah, Iran’s client and ally in Lebanon released a statement condemning Sudan for a “political and moral collapse” and sinking into a “quagmire of betrayal and normalizations with the enemy.” In both the previous peace treaties with Egypt and Jordan, Palestine statehood and recognition of rights of the Palestine people was central to the premise of recognition of Israeli state by its hostile neighbours. The agreements of this year find no mention of Palestine or the Palestinian representation. It is critical for Israel to realise that for long-term stability and peace in the region, Palestine has to be the primary actor with the US and Arab countries playing a secondary role.

During the Sudan-Israel agreement, Trump went on to announce that five more Arab countries are in line to normalize the relations with their nemesis Israel. His special emphasis on Saudi Arabia is particularly sending shockwaves in the Arab world given its central power in the Middle East. As reports came out of a possible meeting between Netanyahu and Saudi Crown Prince, they were immediately denied by Riyadh. The outcomes of the normalization are already visible as trade and technology exchanges have begun. The US has agreed to sell high-grade military hardware to the UAE receiving no opposition from Israel. The exclusion of Sudan from the terrorism list signal incoming economic aid and debt relief. UAE-Israel exchange of tourists was the highlight in post-normalisation.

The year 2020 has exposed the changing geopolitics of the Middle East with three successive diplomatic victories for Israel and personal political victory for Netanyahu. It remains to be seen whether the process that started in 1917 with the Balfour Declaration will be able to accomplish peace and stability in the biblical land.