Who can stop Russia from using banned cluster munitions? 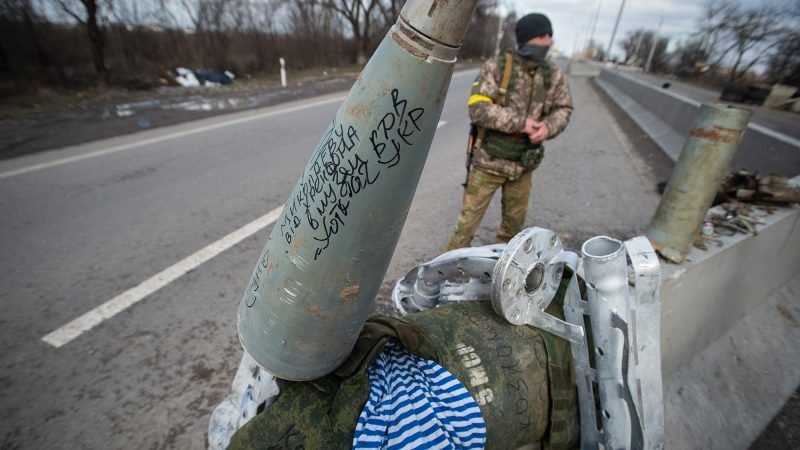 MYKOLAIV, UKRAINE - MARCH 10: The remains of a cluster bomb rocket and other ordnance is collected as Ukraine Army troops dig in at frontline trench positions to continue repelling Russian attacks, east of the strategic port city of Mykolaiv, Ukraine, on March 10, 2022. Ukrainian forces have fended off several concerted ground attacks, with Russian forces coming northwest from Crimea and via Kherson, and filing frequent missile and rockets strikes on the city, Ukrainian officers and officials say they are optimistic that they can continue to stop the Russian southern advance along the Black Sea coast. (Photo by Scott Peterson/Getty Images)
PDF Button

The world is helplessly watching the Ukraine war. Russia has been found using all means to subdue Ukraine, including the mindless killing of civilians. The latest pieces of evidence shown in the media are the use of cluster munitions in Kharkiv, Ukraine. In April, US President Joe Biden accused Russian President Vladimir Putin of committing major war crimes. There is no let-up in this.

Many media platforms, including the BBC and The Washington Post, among others, have reported along with images to show how Ukrainians are at the receiving end of widespread mindless use of cluster munitions, which might have led to the killing of civilians besides extensively damaging private movable and immovable properties. The media has come up with images showing the distinctive marks of cluster munitions on vehicles, buildings, and residential areas.

Cluster munitions are weapons comprising a container that opens in the air and scatters large numbers of explosives or bomblets over a wide area. The number of bomblets or submunitions can vary from several dozens to several hundred. It is said that each bomb container can cover an area. It can be an air-dropped, ground-launched, or sea-launched explosive weapon that releases or ejects smaller submunitions. They detonate in the air, and smaller bombs fall indiscriminately. Sometimes the bombs fail to detonate but can explode after weeks or years.

It is not that the world is unaware of the draconian impact of cluster bombs. In 2008, the Convention on Cluster Munitions conducted by the United Nations General Assembly passed and adopted a legal instrument that prohibits all use, production, transfer, and stockpiling of cluster munitions. The convention was in Dublin, Ireland. It came into effect in 2010. At present, the signatories are 110 state parties and 13 signatory states that are barred from producing or using cluster bombs. The CCM prohibits, under any circumstances, the use, development, production, acquisition, stockpiling, and transfer of cluster munitions.

Interestingly, India is not a signatory to the resolution passed by the Convention on Cluster Munitions (CCMs). Even the US, Russia, China, Pakistan, Brazil, Egypt, South Korea, and Israel have not signed. Even Ukraine is not a signatory. As recently as 2019, Pakistan alleged that India was using cluster bombs along the Line of Control to target its civilians. However, the Indian Army dismissed it as a lie. Though India is not a signatory, it is against the use of this ammunition from a humanitarian angle.

The CCM rules say that a conflict should make a distinction at all times between civilians and combatants. Cluster munitions are considered like exploding bullets, biological weapons, or blinding lasers, among others. These weapons are also prohibited as per international humanitarian law. It is said about 1.5 million cluster munitions, comprising 178 million submunitions, have been destroyed, according to the Cluster Munition Monitor, a global research and monitoring body.

While the signatories to the CCMs have not been found using cluster bombs, America used cluster bombs during the 2003 invasion of Iraq and against Yemen in 2009. According to the Landmine & Cluster Munition Monitor, the United States dropped cluster bombs on Bosnia (1995), Serbia (1999), and Afghanistan (2001-2002) in addition to Iraq. While refusing to end their use, the Trump administration has stated that they are an important military capability. In 2019, the US never bothered to vote on a UN resolution promoting the ban. In 1999, the cluster bombing lasted two days during the NATO attack on Yugoslavia. As many as 14 civilians were killed, while more than double that number were injured. Cluster bombs have caused several thousand casualties in the last six decades.

When the US and other technologically and geopolitically strong countries are not ready to ban cluster munitions, it is too much to expect war-mongering Russia to ban them. But the user may not serve as a game-changer for Russia because the munitions harm civilians rather than attack select military targets. Russia has not bothered to deny charges of indulging in this unethical practice.

Daily, the world is seeing civilian casualties in Ukraine. It has been reported that not less than six kinds of cluster munitions have been used to cause severe damage to civilians and civilian properties. Thickly populated areas have been targeted. Even Ukraine has been forced to use cluster munitions, though not to the extent that Russia has.

Dozens of countries have condemned the cluster munition attacks in Ukraine. Representatives of the European Union, the UN, and NATO have strongly criticised Moscow. Remnants of cluster munitions are being cleared in Ukraine because unexploded submunitions can explode at any time. Ukraine’s State Emergency Service has claimed that about 98,864 items of unexploded ordnance, including submunitions and landmines, have been cleared to destroy as of May 9. As many as 29 workers were killed while doing demining work, while 73 were injured critically.

Superpowers like the US or an international organisations like the UN or NATO may continue to condemn Russia for the use of cluster bombs. But on the ground, the international bank makes no difference because ‘might is right’ is the situation in Ukraine. The US has no moral right to suggest anything to Russia because it has cluster bombs and is also into manufacturing them.