Thailand: The Democracy Within? 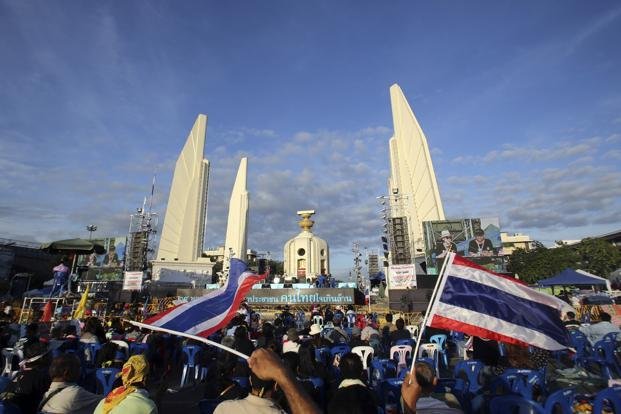 Protesters gather in front of the Democracy Monument during a rally in Bangkok/Image: Published by Livemint
PDF Button

Ask young, typically college and university educated, Thais about the unsettling events surrounding the recent elections and you will not find a great amount of surprise. Junta Prime Minister Prayuth Chan- and his associates in the National Council for Peace and Order have imposed rigid restrictions on public assembly, forced through a favourable constitution, and used government oversight bodies to disrupt political challenges in a vigorous attempt to legitimized his nearly five-year military regime. Opposition parties have faced the threat of dissolution for petty transgressions. Thai Raksa Chart was disbanded weeks prior to the election, and several others including Future Forward awaiting judgment prior to May 9th when King Maha Vajiralongkorn (Rama X) officially authorizes an election riddled with vote tabulation inconsistencies. Whether a “first voter” supports the status quo or clamours for change, none are terribly amazed the improprieties. This is Thailand, as is often said; this is how Democracy with the King as Head of State works.

The important issue regarding this election is not whether it was free and fair—it was never going to be. Nor was the ultimate victor truly in question; Prayuth was always going to have his chance to govern Thailand as a civilian leader. Even if he somehow failed, the new constitution ensured that his prerogatives would have the force of law for the ensuing twenty years. A question still unanswered is whether King Rama X will approve of Prayuth’s performance in the role. But even more important for Thailand’s future is what effect this long-anticipated election will have on the youth of the nation. Will they retain the pro-democracy fervor building since the May 2014 coup and continue to push for greater input and participation in the affairs of state; or will they follow the pattern established over three generations by simply conforming with the status quo once they start their careers and families, giving up on any chance of meaningful change. Simply put, does this younger generation have a soul? This is the central question of the 2019 Thai election.

It is very hard to blame Thai’s over forty years of age for their acquiescence to the political system that has evolved since the late 1950s. For roughly sixty years, the dominant message of the royalist-military coalition was that politicians were corrupt and immoral, while bureaucrats were unsullied servants of the state. The military was the faithful protector of both the state and monarchy and the King was the sacred and unquestioned moral leader of the nation. Certainly, there were moments of discontent—democratic demands from students in 1973 and 1976 and by the rising middle class demanding greater political impact in 1992—but in these instances, King Bhumibol Adulyadej (Rama IX) intervened in the disputes and established a new moral order, complete with the promise of increasing democratization. could believe then that their empowerment was on the rise and being shepherded by the Monarchy, which allowed them the opportunity to confirm and fold themselves into a comfortable narrative—radicalism does not bring change; one must trust in Thainess.

In truth, no moral order was being established. Thainess was less an appreciation for the national spirit, and more what David Streckfuss describes as an elite authored cultural code constraining ideas critical of the monarchy and military at every level. “Democratization” itself was a ruse that allowed the elites to consolidate their social, legal, and economic advantages; but as long as strong economic growth distributed some gains to the middle class, there was little desire to rock the boat. This unravelled spectacularly in July 1997 when over six months the Thai baht lost half its value and the Stock Exchange of Thailand contracted by 75%. The political fallout from the Asian Financial Crisis led to the election of the outsider Prime Minister Thaksin Shinawatra, the results of which are still felt today.

A Generation of Political Games

Some background is necessary to understand how Thai “first-time voters” under the age of twenty-five see their current political environment, and why they cynically reject the platitudes of their parents and grandparents. The Thai economy is no longer growing at a record clip, and the adulation and trust given to the now passed King Rama IX due to his concern for his people is not evident in the reign of his son, the present King Rama X.  If Thais from age forty to eighty could allow themselves to believe that the future would be brighter and more open, fulfilling to their democratic desires if they only embrace Thainess, today’s youth have had no such comfort. Their experiences have been tied to political intrigue and suppression of the general will.

Following the 2001 elections, Thaksin Shinawatra formed a government vowing economic reform. He won reelection in 2005 claiming nearly 80% of the seats in the Thai lower house, but he suffered from his own executive overreach. Eighteen months later he was removed in a military coup claiming to protect the monarchy, and his Thai Rak Thai Party (TRT) was dissolved. By eliminating TRT, Thaksin’s adversaries believed they would eliminate his influence. However, the next two elections were won by the People’s Power Party (PPP), Thaksin’s successor party to the TRT, prompting legal actions by the opposition. The Constitutional Court replaced the military as the vehicle for the subsequent ousters, and this is when the haemorrhage in public trust witnessed by young Thais truly began.

The first PPP Prime Minister Samak Sundaravej was removed from office in 2008 an emoluments charge stemming from acting as a host on two Thai cooking shows. When the PPP again held its position in government and elected Somchai Wongsawat, he was summarily ejected for old dereliction-of-duty charges from his time with the Ministry of Justice. At this point, the PPP was also disbanded, and the anti-Thaksin leader of the Democrat Party, Abhisit Vejjajiva, was elevated to the premiership without a popular vote.

Installing Abhisit was supposed to be the end of the Shinawatra era, but a standoff between pro-Thaksin “Red Shirt” protesters and the military in April and May of 2010 resulted in nearly 100 civilian deaths and a new set of elections in 2011. Thaksin’s younger sister Yingluck Shinawatra and the newly formed Pheu Thai party a rigged constitution to gain a majority of the lower house and the premiership.

However, a miscalculation on the issue of political amnesty triggered strong opposition, and after months of “Yellow Shirt” (rightist) agitation and city strikes in 2013 and 2014, the Electoral Constitutional Court invalidated Yingluck’s successful snap election forced upon her by an opposition Parliamentary walkout. The reason given for overturning the result was that Yellow Shirts blocked polling stations in their own strongholds, and then sued the government for disenfranchising the constituents that the rightists had already had instructed not to vote. After a Pheu Thai caretaker government was established, Yingluck’s government was removed by military coup.

The coup leader in May 2014 was Yingluck’s Commander and Chief of the Royal Thai Army, General Prayuth Chan-ocha, who had made public statements of support for the Prime Minister until just prior to the ouster. With each iteration of democratic elections and the overturning of popular will, interference in government has undermined popular trust is the democratic processes. Significantly, each iteration had also come closer and closer to the ballot box. The events 1973 and 1976 were fought out on Thammasat University campus, Black May of 1992 was fought in the streets. The Shinawatra era battles were executed through law courts and bloodless coups. But the 2019 election has been a full and naked assault on the ballot box itself. Granted, Yingluck’s downfall was precipitated by invalidating the entire 2014 election, but at least the votes were counted and reported in a professional manner before they were disregarded.

Since taking the reins of government in May 2014, Prayuth has consistently called for the return of Thai democracy, but only on his own terms. Nearly five years later, with the clock ticking on the deadline assigned by the Thai constitution he himself endorsed, an election has been held that exhibits not only serious violations of electoral protocol but violations committed with an amateurish arrogance that disregards any prospect of oversight. The sense is that this was the NCPO’s election, and the Thai public simply had tickets to the show. Thai elections have experienced ballot stuffing in the past. But the difference with this election is that steps have been taken consistently over the past five years to limit the franchise through Constitutional revisions, judicial decisions, informal intimidation, and the spectre of the limitless Article 44 to fix any problem that cannot be resolved in more justifiable ways.

The question now is whether Prayuth’s Palang Pracharat Party, which seems determined to manufacture both popular and parliamentary majorities through creative vote-counting, can offer the younger generation confidence in their future? The economy is not strong enough to lift the whole population. Thailand has lost its leadership role in Southeast Asia and ASEAN. The constitution prohibits forthcoming governments from implementing their own policies. And royal sponsorship for popular authority no longer appears as enthusiastic as it was under the reign of King Rama IX. None of this offers the optimism that former Prime Minister Prem Tinsulanonda could four decades ago when Thailand was an Asian Tiger. The future is perhaps not so bright as it was once was.

So, will the “first-time” voters age twenty-five and under, find any inspiration from a political system in that does not allow ensuing governments to stray from Prayuth’s vision of the future for twenty years per constitutional order? One possibility is that they will conform their parents and grandparents did before them, embrace the promise of Thainess, and trust their leaders to guide them towards Thai happiness. Another possibility is that this election has caused such offence that the younger generation will sustain their anger and remain committed to their pro-democratic ideals even after they take on a career and family responsibilities.

The pattern of concession and compromise that has dominated popular Thai political society has hindered the creation of a public sphere. Civil society may flourish is the colleges and universities, but they have few older patrons to turn to for support and guidance because so many Thais have become compromised with age. Each generation must start from square one, and the lessons of the past are not passed along to the future. But if just one generation could keep their ardor throughout their lives, later seeds of change could find fertile ground.  This is the critical transition in Thai politics. Will young Thais be able to rise above the intransigence of Thainess and cling to their principles even as an array of social forces aligns to disempower them? Or will they compromise again—this time not in the face of hope, but of despair?