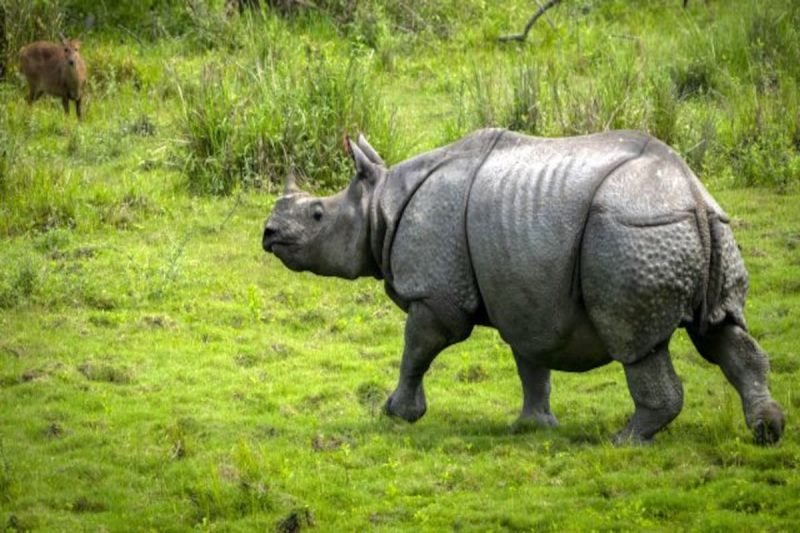 The extremely rare and vulnerable one-horned Indian rhinoceros (Rhinoceros unicornis) was once widespread in India’s North East region, but illegal poaching has reduced its numbers to just a few thousand. It is an oft-stated fact that rhino horn is deemed to be an important ingredient in Traditional Chinese Medicine, and it is this demand that drives up poaching of the one-horned rhinoceros. Appalling its use as a status symbol to display success and wealth is becoming increasingly common.

In a recent case poachers in Assam removed the horn from a rhino after tranquilising it, instead of resorting to the usual practice of first killing it. During routine patrolling, officials in Assam’s Orang National Park, found the dehorned sub-adult male rhino aged around 8-10 years whose horn was cut with a sharp weapon by an expert hand. In most cases when the horn of a tranquillised rhino is hacked the animal wakes and bleeds to death very painfully and slowly. Earlier this year in February the carcass of a fully-grown (around 30 years old) female rhino was recovered in Kaziranga National Park & Tiger Reserve in Assam of northeast India with the precious horn missing.

Strict conservation efforts have led to a rise in Rhino population at nearly 3,700 in India. And poachers have killed 22 one-horned rhinos in Assam since 2017 and till June 2021, 644 poachers had been arrested. The fact that such a large number of men are involved in this illegal wildlife trade (IWT) reflects how many people in the local community have been lured into the trade as rhino horn prices have risen. Simply informing poachers about a rhino’s location can earn a person up to $1,330.

The rhino horn is feted by the Chinese for supposed medicinal properties and fetches a very high price in international markets. In traditional Chinese medicine the horn is crushed into a fine powder and manufactured into tablets or dissolved in boiling water and consumed orally, and despite the lack of evidence believe that rhino horn has medicinal benefits.

The May 9 incident involving tranquilisers goes another step ahead of recent poaching cases, in which the rhinos are being shot at point-blank range with silencer-fitted rifles. While the poaching incident by itself is not unusual, it is the use of high-end tranquiliser guns in a region that is otherwise largely destitute. There is speculation that poachers are recruited from among villagers by organised poaching syndicates, who supply them with sophisticated weapons to carry out illegal activity. Several UN reports have linked wildlife trafficking in smuggling ivory, rhino horn and shark fin, to Chinese organised crime groups, such as the Wo Shing Wo and 14K. Europol’s Organised crime threat assessment (OCTA) states that ‘Chinese organised crime groups, based mainly in Hong Kong, have specialised in the supply of traditional Chinese medicine products containing derivatives of endangered species.’ In the black market, rhino horn prices can fetch up to US$400,000 per kg for Asian rhino horns. Today, a single horn is worth more than its weight in gold, commanding up to $264,134.

Chinese poaching syndicates begin by making contact with villagers through a “linkman” or “introducer,” a trusted contact. The local villagers serve as guides and lookouts, field men for carrying supplies. The syndicates hire one or two sharpshooters, either locally or from neighbouring states of Arunachal Pradesh, Manipur or Nagaland, who eventually carry out the killing or extraction of the horns and other body parts, and the syndicates then arrange for the transport and sale of these. From Assam, these Rhino parts are taken to Itanagar in Arunachal Pradesh, and then to the border town of Moreh in Manipur, a major conduit for cross-border wildlife trafficking. Slipping five kilometres from Moreh across the border into Myanmar’s transit town Tamu, the illegal Rhino parts travel further on to Kachin and Shan states, which border China. Interestingly this particular route is also used for the narco trade in the golden triangle. Poacher routes take advantage of the Free Movement Regime established between India and Myanmar, which allows locals to travel freely 10 miles into either country for up to 14 days. The cross-border trade happens with the connivance of the many insurgent outfits operating in the area.

From its demand in a source of traditional medicine to the tremendously lucrative amounts this IWT of the iconic Rhino generates, to the involvement of Chinese crime syndicates this murky business is also a source of national security problems for India. Money generated from poaching has found its way into the hands of militant insurgent groups operating in the region. Last year forces arrested a militant of the Isak-Muivah faction of the National Socialist Council of Nagaland or NSCN (IM) in possession of a rhino horn, three AK-47 rifles with four magazines, one point 22 rifles with magazine, 87 rounds of live ammunition. Expressing concern Assam Legislative Assembly Deputy Speaker Dr Numal Momin said that a few days back police had arrested one mastermind of the rhino poacher gang from Manipur and there is clear evidence that there is a nexus between rhino poachers, rhino horn smugglers, and extremist groups. According to Rahul Dutta, a wildlife crime investigator with the International Rhino Foundation, “Rhino poaching is getting more professional, high-tech and organised with the growing connections of insurgent groups active in the northeast.” The use of AK and M16 automatic rifles in recent poaching incidents confirmed the involvement of militant groups in poaching activities.

On World Rhino Day, on 22 September, the Assam state officials publicly burned a stockpile of 2,479 rhino horns, recovered and preserved by the government for the past four decades, to send a strong message against poaching. The number of rhinos lost to poaching has gone down considerably due to the government’s in rhino conservation back. But in a region where livelihoods are scarce, the  Greater One-horned Rhinoceros remains vulnerable to poaching and to human-wildlife conflicts. In February this year Assam law enforcement arrested one Azmat Ali accused in several cases of hunting rhinoceros, from the southern state of Kerala where he had fled. The balance is still fragile, and the threat of poaching is ever-present.